Legacy of the Ancients weapons are too OP

Looks like the latest patch fixed the OP issue for Late-Mid game to Late game. Very few One Shot Kills I am seeing now. 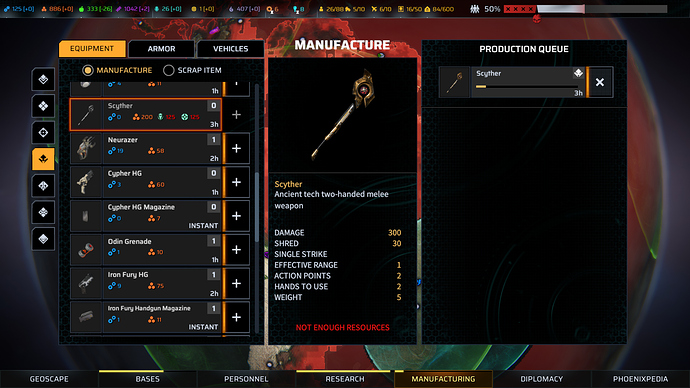 300 damage in exchange of 2 AP is great, but again if you use Vengeance Torso or Adrenalines Rush…

Coming back to this old thread because I have taken a screenshot which shows how strong the Scyther is when used with a specific setup (Assault / Infiltrator with Vengeance Torso) and also to get an impression of its AoE effect in an arc up to 3 tiles distance: 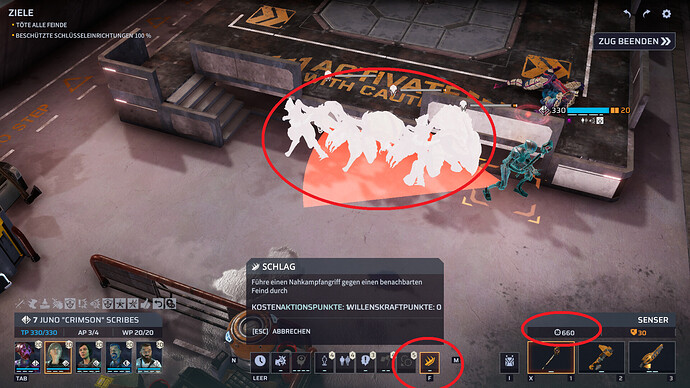 This is a triple kill with 1 AP usage, the Close quarters specialist perk isn’t really needed, it deals 600 damage without this perk thanks to Sneak Attack, enough to kill all the foes. And even when SA should be nerfed, in this situation it would be 2 attacks to kill all three enemies, 2 AP spend and all AP back because of Rapid Clearance.

My Terminator build No. 1, IMO beats anything that is also possible and no personal perk is really necessary.
The one in the screenshot has additionally anything that makes this even stronger, CQS, Quarterback and Thief, so full stealth and with high speed (base 24, with Frenzy 36).

Feedback on Phoenix Point as a XCOM Veteran

This is “only” my second team, all maxed out close to my first one.
I do a long run just to try out how long it will go (currently at 01.05.2047, population at 46% and decreases very slow since I destroy any base that arises) and to test some of these … things.
I did so many missions that it is no real problem to max out some more soldiers as usual, two of my first soldiers have 96 missions and currently I use them rarely, only if necessary (because they are more than maxed out with +328 SP and nothing left to spend on).
Oh, and also “only” on Veteran difficulty.

Edit:
Ups, no, this one is my first team, the second is the one of the other thread, now I’ve messed up the two

As you can see from the pictures, I have more resources than I ever need, so much that I even built the less efficient plantations to produce food. The ancient weapons also cost no maintenance thanks to infinite ammunition …

This is the wizard overlord or overload

What comes to mind right now: For those who would like to have a “reverse difficulty”, the LotA DLC is exactly “made for it”. First play through the contents of the LotA and then create with OP weapons and SP rewards some wizards, with which you can then enjoy the rest of the game stress-free with “some click around”.

Created a new topic Rebuilding the Statistics / Parameters of the character

This will never happen, the devs like wizards for sure.

This is the wizard overlord or overload

I have also a special wizard for you as you “like” bombardments:

Assault / Heavy with the new Vidar light grenade launcher, normally 1 AP to use, with Boom Blast 0 AP, only restricted by ammunition because it has only 1 shot. But well, there are some others in the team and as an Assault with Ready for Action … MANY bombs are raining …

Thank you!
Shoot bombs with 0 AP forever! Finally Boom Blast is worth to have.
With stackable Mark for Death (bug or maybe not) the balance on the player side is corrected and the game is finally winnable

Be careful, it is very expensive, one grenade costs 12 materials an 1 tech, I had mission where I had to spend over 200 materials only for the grenades. But look at my resources …

Be careful, it is very expensive

Oh I guess, this must be the „hidden“ challenge .

Man I spent a good time wondering which grenade launcher was that, even went to the wiki… until I read the end of your post

Why did they choose to make this 1AP and not 2?

Man I spent a good time wondering which grenade launcher was that, even went to the wiki

It is there, but it is an Assault weapon, down on the bottom: http://wiki.phoenixpoint.com/Assault_weapons

Why did they choose to make this 1AP and not 2?

Because not only do they like wizards but also wands?
Honestly, I don’t know, after I’ve researched it, all normal hand thrown grenades were pretty useless for me.

Another thing and not documented is that the Trooper perk gives proficiency for this beast (I guess because it is an Assault weapon). I have one Heavy / Infiltrator with Trooper … 105 Damage and 10 shred per grenade for 0 AP and Boom Blast also makes reloads for free …

It is there, but it is an Assault weapon, down on the bottom:

I haven’t seen the new stuff yet. I thought it was for heavies too.

Because not only do they like wizards but also wands?

It’s not possible that they didn’t think of boom blast, unless all the game designers AND devs were replaced by new ones and the old ones redirected to the new game… maybe they did this on purpose because there are planned changes to 0AP shots or boom blast?

If not you’re right, they love wizards and wands and we should name our characters after harry potter characters

Another thing and not documented is that the Trooper perk gives proficiency for this beast (I guess because it is an Assault weapon). I have one Heavy / Infiltrator with Trooper … 105 Damage and 10 shred per grenade for 0 AP and Boom Blast also makes reloads for free …

This is probably a bug since Trooper is supposed to give only AR proficiency, report it through F10 and let’s see if they fix it.

Well, looking from the base it is quite limited because it has only 1 shot and then it needs a reload, so basically 2 AP if you want to shoot again. Assaults have Ready for Action, so they can reload for free, but I think this is still OK because you need inventory slots for every single grenade. What I have done with an additional squaddy as inventory extender is somewhat quite special. And it is as weak as the standard Odin grenade with 50 damage and 10 shred but is only available in a later stage of the game (needs acid worm autopsy, so after Lairs are introduced) when there are some other, better grenades already there. And finally the grenades are not really cheap when you use them en masse.

I’m really undecided whether this is really too strong or not. The use and builds I have described are still very special.

but is only available in a later stage of the game (needs acid worm autopsy, so after Lairs are introduced)

Oh, nice to know that. It seems strange to get it later on because by then you’ll have access to different grenade types… the 1AP less and 4 more range may not be enough versus the versatility the array of different grenade options bring, along with one less inventory space / one more grenade. That is, unless you go the wizard route and dual class to heavy, or the “wizard + wand” route of a heavy with trooper (which I hope is a bug).

Well… if you have enough strength, you can always take it with 1 or 2 ammo plus some different grenade types, I suppose. My assaults always take an AR + SG + medkit so 3 slots. That would leave 6 more for the launcher + 2 ammo + 1-3 other grenade types.

That changes if the guy is a heavy too, though. I like my heavy weapons, all of them, the heavy becomes prepared for any situation if he takes 3 or 4 (cannon, GL, MG, acid cannon, fire thrower)! This Vidar GL surely seems better than the Goliath GL with 1AP vs 3 and only 10 less damage 5 less range, but having to lose a lot of inventory space… not so sure anymore… BB with 2 grenades from GL is already pretty good.

Is it me or the Vidar is 100% accurate, like hand thrown grenades?

IMO, the weapon is perfectly OK. It’s not worth 2 AP a shot; it has relatively low damage and small blast radius, + the obvious limitations re carrying munitions for it.

I suppose you could circumvent that by having everybody else carry grenades, but it would be very tedious, and there are enough OP builds that are better.

I don’t like Boom Blast and Quick Aim giving 0 AP shots, but I think Vidar is a good, well balanced weapon.

Is it me or the Vidar is 100% accurate, like hand thrown grenades?

No, it scatters like the grenade launcher, though it looks like it is not as much, but maybe only because of the shorter range.

I don’t like Boom Blast and Quick Aim giving 0 AP shots, but I think Vidar is a good, well balanced weapon.

The problem are the skills and not the weapon.

Agree! About 0AP costs, I’m not entirely against them, if they could be used only once. Quick aim works like that and takes its toll of WP each time, it’s not realistic but ok in terms of gameplay, specially because 1AP weapons were not powerful. That however changed with the melee torso and now with the Vidar. Boom blast is way more problematic as it’s till the end of the turn, it was too much before and now with the Vidar it became the wizard’s wand.

Maybe if quick aim could be used only once or twice per turn and boom blast applied to only one shot, it would be better? However boom blast would’ve to cost less, maybe the same as quick aim. It would still work only for explosives and offset this disadvantage with the enhanced range.