The Disciples of Anu tech tree and arsenal seems like it has aspects where it can offer some capabilities that enable the creation of overpowered Terminator builds, yet has other aspects that seem underpowered or even missing entirely.

The Disciples of Anu could use more mutations to choose from, but there some new mutations in particular they could really use. In the ‘Mutations of Anu’ Phoenix Point website news update from 29 July 2019, it hinted that there would be other kinds of priest head mutations aside from the three that got included in the released game. It mentioned a priest head mutation ‘hiding their allies from the alien’s perception for a turn’. Given that the Disciples of Anu are overall a very close quarters combat dependent faction, they need a way to close the distance against the Pandorans, New Jericho and Synedrion without being cut down by medium and long range firepower before they can even get close. I’m sure Taxiarch Nergal would have noticed this problem. If the Disciples of Anu priests could have a head mutation that granted a long-range psychic ability that allowed them to temporarily reduce the perception and accuracy of a group of enemies, that would help fix a big tactical weakness that the Disciples of Anu have. Maybe call this proposed priest head mutation the ‘Glamer’ head, based on the DNA of the Shadowed Hierarch. It would be cool if this priest head also had a slight stealth bonus, instead of the stealth penalty that the other priest heads have, so that it would be a viable choice for Infiltrator/Priest multiclass operatives.

I also found this unknown, unused Priest Head design while I was playing the game, and have used it as my avatar picture. It is shown only in this event background. I don’t know what this Priest head was supposed to do or why it got cut out of the game, but I think this Priest head design looks really, really cool and I hope it gets reintroduced to the game at some point. 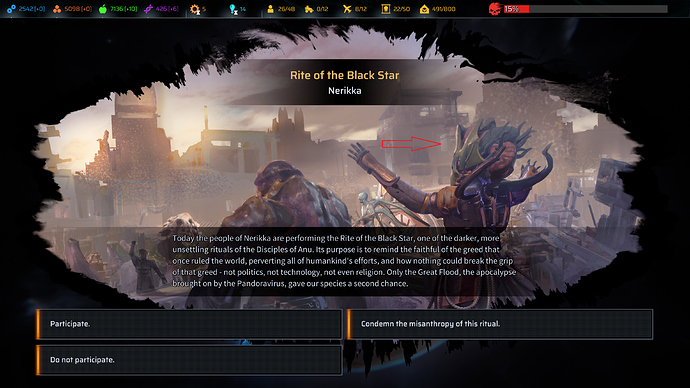 Other than that I see your points and agree.

I agree with all that you posted,

in my opinion Adrenaline should be used only fro single class soldiers , melee weapons not doubts about it, PP Lance I would prefer 1 AP per use, compensating low damage.

Mutogs Venemous is not so bad , 120 DoT using 4 AP, is fine, I think Ramming Mutogs could require a tweak

And about tech, I miss more SR types during early and mid game, Subjugator is a Viral weapon, dangeours, sure, but it is not enough,

you can contain and wipe out lot of enemies without close combat, it is easier to fight Discples of Anu and The Forsaken, beacuse of that, their strategy is viral, acid and speed, also Priests,
but they can’t get close due to Snipers and Heavies killing them without actual risks,

also some kind of launcher, poison or acid, could level the forces

Another thing that the Disciples of Anu have that could use a balance update is the Priest’s Amphion armour. The appearance of the Amphion torso armour gives the impression that it mounts technological devices that are meant to enhance and amplify the Priest’s psychic abilities, not just make the Priests look impressive. The perception bonus that the armour gives is probably meant to reflect this, but it would be good if the armour directly improved the Priest’s psychic abilities in some way, like boosting their willpower stat or reducing the willpower cost of using psychic abilities for example. Otherwise, Amphion armour just isn’t good enough to make it worth wearing for Priests when compared to other armours, bionics and mutations.

By this point it looks as if almost everything that the Disciples of Anu have needs rebalancing and updating. I like this faction, but I dearly wish that everything they have is eventually balanced so that it is effective, interesting, useful and viable without being overpowered. Same deal with the other faction tech trees as well.