We’ve released our latest Hypnos update for the Behemoth Edition on PlayStation and Xbox, which includes some game changes, quality-of-life features, and other fixes. Most importantly, we’ve also increased the stability of the game, improved some frame rate and performance, and included a fix to prevent saved games from being corrupted. This patch number is 1.05 on PS and 1.0.11.0 on Xbox

Full patch notes for the original Hypnos release are here, while the v.13.2 update additions can be found here.

New for this update specific to console are the following patch notes:

After this patch on ps4 i experienced a new problem. When i enter a tactical mission the game open up a window where it say that some files are corrupted and i must install the game again. The game still loads and the mission start anyway, i press abort and the windows closes, while i keep playing the mission.

Do I get it correctly that you can play and just ignore the message? Does the message appear again later? I guess you can play in that case but it might cause some problems later. So to be safe I would rather reinstall as the game tells you.

It didn’t work. I re installed the game but the error message is still there 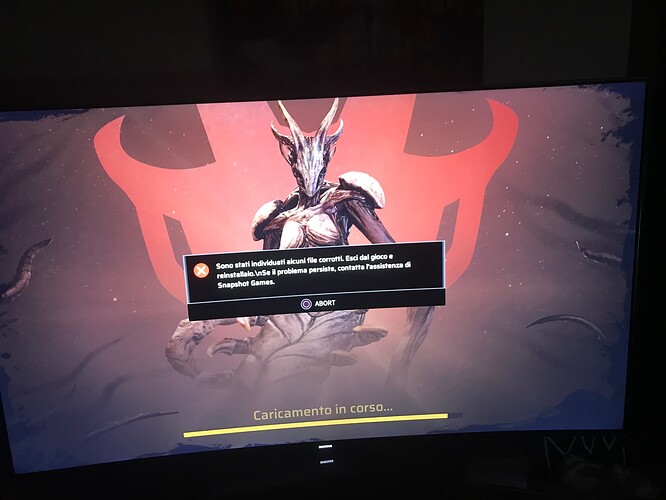 Ps: it’s italian language. If you need a better picture let me know.

Hello? Any reply to that please?

Sorry, I do not know what else apart from reinstalling could you do. You could try to reinstall it once again. Or wait once you finish your current campaign and reinstall it before you start a new campaign if you are going to play another campaign.

So, your patch made something worse than before and the only thing is installing the game over and over hoping some magic will happen? Cool. I didn’t know programming a game involved faith.

If you continue campaign from before patch then error can persist. Reinstalling and starting new campaign is more likely to be without errors. If the error is new, then devs may probably be not aware of how to fix it and may not know the solution for your issue.

So i must restart a game because the patch ruins the previous saves? In a game that will likely take hundreds of hours to finish?

As for making the devs know, it’s exactly why imm writing in the offical forum…

Some bugs which can be written in save game file can’t be fixed without starting new game. That is unfortunate. But this is how it works in Phoenix Points. Many times new campaign had to activated to get rid of bugs or to include new content or mechanics from last patch.

Even more unfortunate will be if bug persist in new campaign after reinstalling. But we probably expect perfection of Firaxis from indie studio as Snapshot Games

Far from it. I’m not asking perfection and i’m really, really grateful for that game that, in manu aspects, is even better than firaxis xcom.
And now that i know more about how patches like these works i understeand. I think i’m gonna keep playing this campaign and if i’m gonna lose i’m gonna start anew, and hope for the best.