So the weapon and soldier stats are all fairly well explained, however I can’t seem to find stats for a few things:

1 . Weapon accuracy is displayed as something like “effective range”.
In phoenix poin, effective range mean “the ability to hit an human size target with 50% of the shots.”

So basicaly, the more the weapon have a high effective range, the more it can shot an unit far away with ease and accurately.

2 . As far i can tell, weapons all do the same noise except the crossbow that is silent. Weapon firing apply an instant malus to your stealth perk, but i don’t know by how many.
Other player - dev input can help here as i can confirm this statement

3 . Oddly, a soldier perception isn’t shown in armory / personal, menu. It’s available during comba if you go in your soldier info tab.

Perception is the ability, exprimed in “tiles”, to detect the ennemy. If your soldier have 20 base perception, it can detect a normal ennemy at 20 tiles away. (according their isn’t anything breaking the field of view, like a wall).
Some perks and equipement boost (or nerf) perception by a percentage, it modify the base value of the soldier.
Stealth is basicaly the direct counter.
A soldier with a high stealth value will basicaly “put a malus” to ennemi perception.
So a soldier (like an infiltrator for exemple) with 50% stealth will basicaly “reduce by half” the ennemy range of perception, and therefore make him harder to detect him.

For the record, most info are displayed ingame, just a little hidden, i play in french so sorry for screen but… 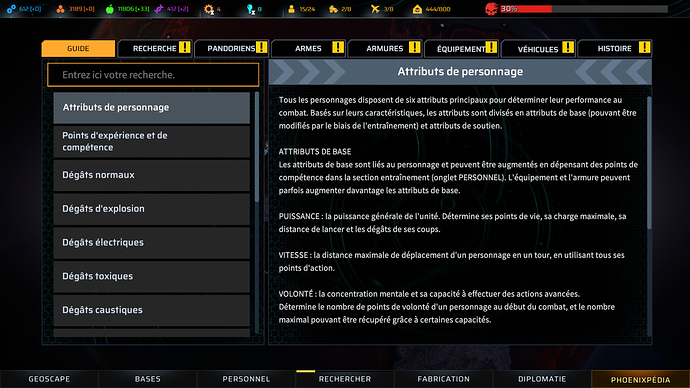 In phoenixpedia (lower right of the screen) then guide -> then “character attribute” (i think? translating on the fly)

You have severall info about player stats, including perception and stealth.

For the accuracy part itself, it’s also show ingame but you can’t actively look for it…
It’s a tooltips that appear at the bottom of a loading screen, but it’s random among a lot of other so you have to be “lucky” to see it XD (a really strange desigh choice, yup)

For the accuracy part itself, it’s also show ingame but you can’t actively look for it…
It’s a tooltips that appear at the bottom of a loading screen, but it’s random among a lot of other so you have to be “lucky” to see it XD (a really strange desigh choice, yup)

Yeah, I literally just saw that tooltip about accuracy/“effective range” for the first time the other day after like 12 hours of gameplay…

Thanks though, I’ll check out the Phoenixpedia. Just wish there were some more in-depth tutorials or something to cover some of these, like how stealth & perception interact and how hearing is different from perception.

Yep definetly agree with you, ui need more info, and the starter tutorial do the trick but in a really too limited way. I hope it will be improved in the future :’)

for the hearing thing, i can’t tell how exactly it work, as their is no “silent” perk to counter the perception one. I guess it’s just flat perception, somehow modified by weapon shooting (except the crosbow), and not blocked by walls. But really, i can’t tell exactly how this work. and as far i can tell, it’s nowhere to be found ingame, except if it’s hidden in a loading tooltip that i may never saw xD