From a Newbie to a Pro, after failing multiple times. now i won 4 time at Veteran and 1 at Hero.

1} PERFECT SQUAD - On a Manticore, have 2 Assaults, 2 Snipers, 2 Heavies. Early on, you’ll cut through Pandorans with this setup.
Assault, Dash and flank to kill em.
Sniper, Aim to arms, with QuickAim ability, you can shoot twice if you don’t move
Heavy, Jumpjet next to an enemy, and with Improved Bash, you can kill them or stun them.

Vs. Pandorans - Use Snipers to shoot at Arms. With 1 or 2 shots you can cut arms off. Shoot the ARMS NOT THE CLAWS OR MACHINEGUNS , by shooting the Arms, eventual weapons or shields will fall off, and add -10 Bleeding

Vs. Pure - Your pew pew rifles wont do a thing against them, but you can use Snipers to
disable Arms, so they can’t shoot, or Heavies to Bash (with added damage passive ability) and 1-bash 1-kill, or use their big guns to shred armor or stun them.

Vs. Forsaken - Same as Pure tactics, except your Rifle can actually do something to Priests or the Green Tentacles guys.

2} SCAVENGE - To have an edge on Resources, do 2 or 3 Material Scavenge missions, 1 Vehicle retrieval for each activated Phoenix Bases to boost their defenses. Do Soldier Rescue missions RIGHT AWAY, as later on they will most likely die and be pointless.

THUNDERBIRD - Steal a Thunderbird from New Jericho early on, using the Snipers to disable arms and Heavies to Bash soldiers will most likely kill em in 1-shot (JumpJet next to an enemy, 1 AP left + Bash = done) Why this ship? Because on your Perfect Squad you will need an Assault/Technician, so you will tranfer your Crew to the Thunderbird, and the Manticore will be your Defense force aircraft.

4} R+R - RECRUIT & RESCUE
VETERAN - Now with an extra ship, recruit soldiers from NJ Havens, they have heavy armor, and better weapons. Take their weapons away and reverse engineer them. NO POINT on doing this on armor. Done this, give Gauss weapons to all your squads, BUT do it slowly or you’ll drain your resources. Just re-arm Team B, Team A will be fine for a while. Rescue Indipendent Soldiers and re-arm them with PP weapons ( or NJ ones ), NO NEED TO CHANGE THEIR ARMOR until later on, remember, their priority is Defense missions or easy one.
HERO - Havens soldiers will have no weapons, so re-arm them with PP weapons. You’ll find new weapons in Havens defense missions from dead Pandorans or Faction soldiers.

5} BASE LAYOUT - Have 2 Medical bay, 2 Living quarters, 2 Research Labs, 2 Production Plants, 1 Satellite Uplink, 1 Mist Repellent, 1 Training Center . Each Activated base need to have 1 of each instead of 2. Keep team B leveling up at base while waiting for Havens defenses.

6} STARVE ( or almost ) - Trade food for material every now and then. Only trade for Tech when needed. Keep like 400 in storage.

7} TEMPTATION - I know, you want to roleplay, save every haven, but NO!
PP Path to Victory - Your focus is to research the Pandora Virus. Focus on Research, use the Factions to get yourself rich, but your main focus is to Research and the Yellow Icon missions around the Globe. Ignore Distant Havens, do the ones close by for Resources and move on. You’ll hear " Haven Destroyed " many times.
Factions Paths to Victory - The opposite
VETERAN - It will be easy to be allied with all the factions. Do all Missions and make a good savepoint and choose which path to follow.
HERO - focus on one faction to be friend with, and steal the others Research.

8} NEURAL - Research Pandoran Containment unit, and trash that Neuralyzer. Use Neural Weapons, by either looting Synedrion corpses, Steal their research, or be allied with them.
Neural weapons can be used from safe distance.
HG 1AP = 4 Paralyzing shots, good for Basic Pandorans or worms or mindfraggers. 0AP with QuickAim.
SR 3AP, 2AP with QuickAim, 16 Paralysis, from a very long distance. Useful for Sirens, Chirons and Scylla.
Paralysis plus War Cry can prevent Scylla from doing a thing after a few shots.
CAPTURE A SIREN, THEN A SCYLLA is mandatory for PP and SY Paths to victory.

9} WALKING AMBULANCE - Remember the step to have Team A 7 soldiers with an extra Assault? the 3rd Assault soldier must be a Technician. Steal the Research from NJ or be Allied with them and Train your soldier for Tech Abilities. Technician with the Robo Arms can restore broken limbs and cure 8 times! a nice Piercing AR plus 2 RoboArms batteries = can cure soldiers 24 times!!

10} SNIPER MADNESS - Now, almost endgame, Train your Sniper with the Infiltrator abilities. Sneak attack will increase your Snipers damage by 100%!!. Max their stealth and keep em very distant from the enemies.

11} BURN BABY - DO NOT underestimate Fire weapons. NJ Flame grenades creates an area of denial where enemies will most likely lose limbs or kill walking mindfraggers. NJ Flamethrower is a beast against Arthron and Triton. one blast can destroy almost every body parts, disabling everything, denying Umbra, and inflict 50 bleeding and up.

12} SPOILERS - During the Final mission, combine Team A&B and deploy 4 Snipers/infiltrator 1 Assault/Tech with 2 Turrets and 2 RoboArms batteries, 2 Assaults, 2 Heavies. I have a couple of good tactics for this, but i wont do any spoilers. You went this far, you can do it!

Thank you for buying this game and supporting Gollop and Snapshot Team, and get gud!

THUNDERBIRD - Steal a Thunderbird from New Jericho early on, using the Snipers to disable arms and Heavies to Bash soldiers will most likely kill em in 1-shot (JumpJet next to an enemy, 1 AP left + Bash = done) Why this ship? Because on your Perfect Squad you will need an Assault/Technician, so you will tranfer your Crew to the Thunderbird, and the Manticore will be your Defense force aircraft.

Much better than a Thunderbird or Tiamat is 2 Helios. Even one Helios gives you the ability to explore quickly and hoover up easy missions (nests, haven defenses where the haven is winning, etc), and two together gives you a full-size squad moving at top speed.

9} WALKING AMBULANCE - Remember the step to have Team A 7 soldiers with an extra Assault? the 3rd Assault soldier must be a Technician. Steal the Research from NJ or be Allied with them and Train your soldier for Tech Abilities. Technician with the Robo Arms can restore broken limbs and cure 8 times! a nice Piercing AR plus 2 RoboArms batteries = can cure soldiers 24 times!!

I think it’s better to think of the Tech as a walking machine-gun nest - while the ability to repair limbs is pretty awesome, I’ve never used it so much that I need 2 batteries worth of healing! On Veteran, I think the only time I ended up reloading them was on the final mission.

But the turrets are just ridiculous once you get Remote Control. You can shoot 4 times in a turn, with the most powerful weapon in the game, plus the free shot the turret gets afterwards. Even Scyllas will die in a few turns to that level of firepower. (The only problem is if the turret is destroyed, so bring a spare if you’ve got the strength for it. But even then, any turn that the turret is getting shot is a turn your soldiers aren’t!)

I agree with all tips given, including that Engeeners best ability is indeed turret placement (and rellocation

Just to add to the mess, there is a strange Steam achievement of being allies to NO one (only Phoenix path). This would be interesting, since essentially 3 base defenses would offer one raid chance with no penalty, so thievery and raid is a must there since never all tech will be given to Phoenix

So, in Phoenix Point, it looks like the keys to success are to be fast with scavenging resources, quickly gaining Reputation with the Factions to try and get better weapons before the Pandorans “out evolve” you?

I am on my second attempt and I think I dragged it out too long. The Pandorans were throwing more variants of every type at my guys and wiping out Faction havens left and right and I kept running into the problem of not having enough Tech and Material. To make matters worse, the three Factions were warring with each other and helping the Pandorans wipe each other off the Geoscape. It came to a point where the whole of South America was literally covered in Mist and it was a dead continent.

Just to add to the mess, there is a strange Steam achievement of being allies to NO one (only Phoenix path). This would be interesting, since essentially 3 base defenses would offer one raid chance with no penalty, so thievery and raid is a must there since never all tech will be given to Phoenix

It seems to be enough to simply research the Virophage Injector, after that the reputation for all factions drop about -50 rep, so you’re definitely not longer allied with anyone.

For this achievement, it obviously doesn’t matter that you were allied with one or more factions before the end, otherwise I can’t explain to myself that I have it. I always ally with everyone and also in the campaign where I went for the PP end:

@rasvoja
You can actually be Allied with everyone, achievement is actually misleading you. I had everyone over 70% and researching the Virophage Injector didn’t get me at war with anyone. The Achievement just wants you to do the PP ending

@NeoHunter
It is not about “Out Evolve”, but to be smarter than them. Check carefully the PERFECT SQUAD section. I got my PP Squad with regular guns in my actual playthrough, and I’m like mid-game, already killed a Scylla.

At some point, I’m gonna post a big video on my YTB Channel and I’ll post it here too.

This Pic was on my pre-patch Hero Playthrough. If a bunch of Bandits can capture a Scylla, anyone can! 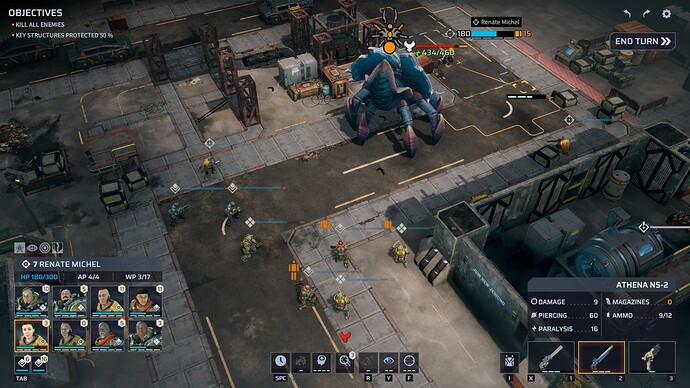 Another “bug” with steam achievements,

I got that achievement without actually alliances in game at any time, just aligned status

Then I would rather say it isn’t bugged.

It’s supposed to get “without allying with any faction”.

Researching the virophage injector decreases the reputation of all factions for 50, so after finishing this research the player isn’t allied with anyone. Though you still can research their techs (I consider THIS as a bug), but in diplomacy overview its states “supportive” (<50) or “alligned” (<75).

Well, different interpretacion , if you get an alliance, that should prevent the reward, no matter if you lost that status before the final mission, not defending their havens, defending other factions or just researching the injector

Yes, it is a matter of interpretation. But it is still not plain wrong

to me it is very clear, but it doesn’t matter 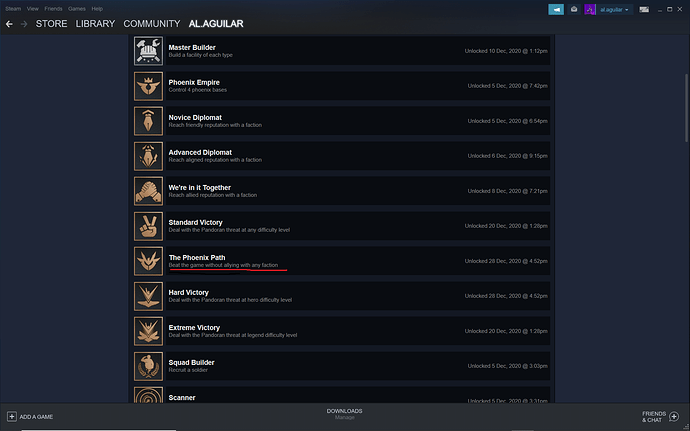 but it doesn’t matter

I personally don’t bother about the achievements, I would rather like to have a better game as it is now