Funniest moments i had in the game so far

Just wondering what hilarious situations other players encountered when playing the backer builds.

In a nest, I had a triton come next to one of my soldiers and shout at him. This soldier was an assault with return fire and a shotgun. It was so funny, like if the triton scared my soldier and his reflex was to obliterate him.
Also, it was the first time I saw them do that so I was also surprised by the shout (applies paralysis).

Also, it was the first time I saw them do that so I was also surprised by the shout (applies paralysis).

I had something similar except the first triton i met went invisible and attacked my shotgun wielding assault who had return fire. The end result was just like yours.

Any time I manage to destroy a roof where an enemy’s standing and it comes crashing down to the floor.

Bonus points if my soldier’s standing at ground level, I see it as kind of an Aliens-motion-tracker-scene-reversal, in the movie the aliens surprised the troops by attacking from above, and here it’s the humans surprising from below.

No, the triton can yell something and it applies a debuff (I think it was 7 paralysis)

Almost killed one of my soldiers trying to remove a parasite with buttstrokes. 'Cause the game selected him by default 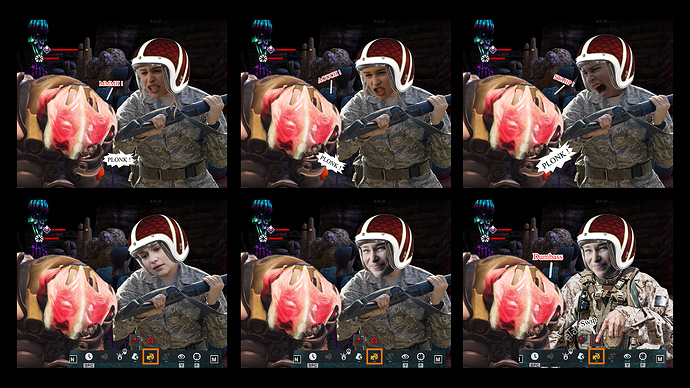 Shotgunning a Siren with an Arthron just behind. The Arthron shot her with its return fire.

Yay ! And when you break a limb with a snipe, excedent damage goes to the target behind it. This morning, broke a crabs arm AND a (already damaged) sirens tail with one bullet

Just a few minutes ago, three opposition heavies in a mission decided to form a line.
When I saw that I thought … sniper rage burst.
Three heavies down.

Happened in BB5. Was on a way back to the base to ditch scarab and took a mission. This was first time playing against a bunch on NJ soldiers on Anu map. As I’ve tried to evacuate scarab as soon as possible, I’ve proceeded to expend rockets in a general direction where some enemies where scouted. Little did I know that this heavily crippled 3 heavy NJ soldiers who where now unable to shoot back. The end of the mission was 3 of my guys chasing weaponless heavies around the map, they didn’t evacuate and where sort of keeping their distance. My assault with his assault rifle was useless against heavy armor so had to use sniper’s pistol. My heavy run out of grenades and was just getting as close as possible to do some damage with a shotgun. This was the most anticlimactic mission as it was suppose to be rather hard but turned into a Benny Hill style comedy.

Had a field setup for overwatch and return fire trap in an early mission against machine gun toting crabmen. First crab took the bait, flanked one of my lead assaults and tapped him with machine gun. Assault returned fire, then the next guy, then a third when the crab was just about dead… Of course my third assault winged a small fuel barrel, which just happened to be by several other small fuel barrels and lead to a chain reaction taking out the nearby massive fuel barrel. My trap backfired, the crab survived where my 3 assaults did not. Did learn they had put explosive barrels in at that point.

Today i saw New Jerico declare war on and begin decimating Synedrion havens. Something like 8 havens fell in less than five minutes before i decided to save one nearby Synedrion haven. Went into the battle prepared to take on something like a 28 strength New Jerico force, who i had not yet fought against. Pushed a few guys forward a bit and saw an armadillo and lone assault belonging to New Jerico. One of my snipers shot the assaults arm to disable it, everyone else was around a corner in an overwatch trap. Figured both the assault and APC would rush in. Instead they decided to retreat… strength rating lied, it was only one guy and APC on the map. Surprised me to win with only a single shot fired.

Another amusing scenario: Today i went to defend a Disciples haven from an attack led by a Scylla. Took out a pair of chirons that started almost right on top of my squad before i saw the scylla across the map. Moved up to try and take it out but couldn’t get an angle or line of sight with the snipers to weaken it, so it was down to a pair of assaults with shotguns and dash to try and make it work… Dashed the first in and got stopped by a triton and arthron. Fired off the assaults shotgun one time and retreated into a building, second assault i setup nearby to try catching either the triton or arthron in overwatch. Didn’t work out as i planned, the scylla acted first and fired her cannons to take out both the arthron and triton for me (not sure what it was actually aiming at there) as well as managing to maim her own cannons. The following turn i ha both assaults dash in and unload shotguns into the cannon arms which had no armor, dropped the scylla in one turn.

Another funny moment today. Went on a haven defense and dropped the hostile Scylla in first round with my snipers disabling the arms to lower armor then a shotgun assault finishing it up close. Jumped my heavy on the roof to give a shout lowering hostiles AP. Everyone else i spread out a bit to catch the enemies i hadn’t uncovered. Of course nothing went for my overwatch guys, a couple of tritons moved in close to my overextended assault then one arthron moved up and brought out its machine gun. I see it lining up the shot and knew my guy was dead. Luckily he wasn’t completely without cover… the two tritons took the bullets and caused a mass panic for the pandorens.