I’m playing the “Retrieve Evidence of the Antediluvian Civilization” mission and I can’t select the target square that allows me to complete the map requirements. Possible, due to an enemy that was killed next to it.

Please see the image attached. (notice the X in the mission square) Also, note that saving and reloading the save doesn’t fix this issue. 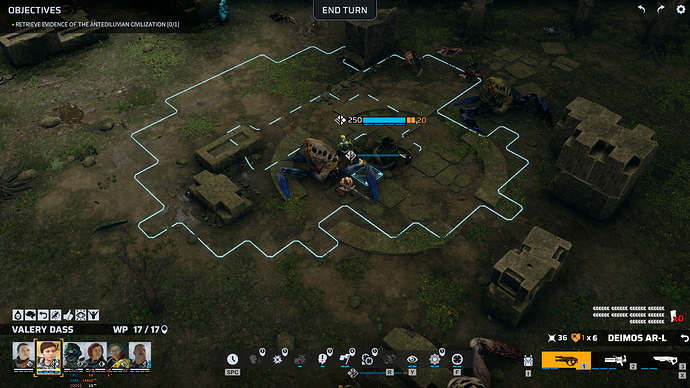 The only solution in this situation would be to shot the leg with a Hel II Cannon. AFAIK it is the only direct fire weapon that can destroy almost any obstacle like this killed chiron body or at least parts of it. This way I got one of my melee soldiers out of the legs of a dead Scylla. Just free aim on the leg of the dead Chiron and it should disappear. Maybe explosives will also work if you have no Hel II with your team.

grenade launcher and other explosive weapons also works in many cases (just try more than one explosion), sniper rifles too. But yes, Hel is I think the best for such job.

I reloaded a later save and was careful not to kill enemies near it.

Unfortunately, I’ve overwritten the save when this issue occurred and can’t test it shooting with Hell II would fix this. In any situation, maybe the dev team can include a fix for this kind of issues (maybe clear any alien body that lays over the mission square after 1 turn). I agree, it’s mostly just bad luck, but it can be upsetting after such a hard mission

If an enemy dies and their body falls onto a square on which a soldier is position, then you can’t move the soldier - restart time. So there’s a common thread going on here with the larger bodies.