Hi, I wonder how exactly fire works. I see it can put enemy aflame for current and next turn. But I hardly see any damage there. Are separate body parts affected or it only applies for whole body and general HP? It also prevents any unit from entering tile with flames for 2 or 3 turns.

Visual effect is great, especially when you try to aim with soldier standing in fire, but aside from spiritual joy what is the purpose of this kind of weapon? I barely find it useful comparing to other grenades or heavy weapons. Damage is minimal to enemies, which I have encountered, and fireworm looks like being immune to it. It can stop enemy movement at choke points, but still I would prefer to use grenade to kill enemies over stopping them for a while. And range is minimal - grenade works like other grenades but has worse range than rocket launcher or grenade launcher, and flamethrower has worse range than even machine gun, not to mention heavy cannon or grenade launcher.

Do you guys have other experiences with it?

You can’t target bodyparts with the Flamethrower, I can’t tell you how it will be calculated with the life, maybe it will be clear if you burn something with many life.

The Flamethrower is useless like any low range 2 handed main weapon. Range and damage makes it very useless, so double to triple the dmg and/or increase the range.

Like I wrote in my BB Feedback, I would love to see these Flamethrower, the animation looks amazing in the picture. I also love the HUD from the old pictures more. 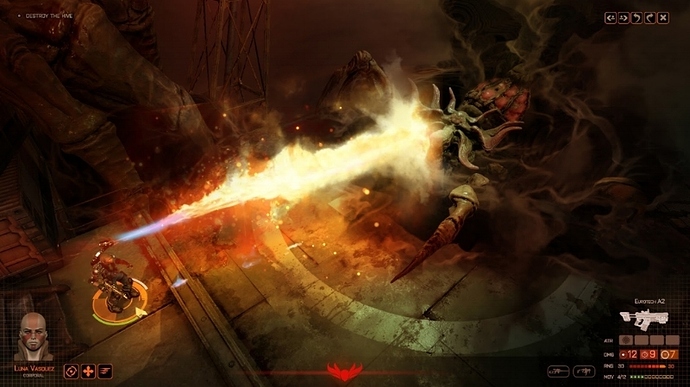 Ok, I take it back, that fire make small amount of damage…

I can’t figure out how it works. But I suppose there is initial explosion damage (2 points or something like that) and then effect is applied to some specific number of body parts (maybe all, maybe less) and there is set random number of turns it will do damage. Am I right? It is affecting body parts and starting to do random damage (up to 6) to them instead of main HP pool - this is why I though it makes small damage. When damage exceed body part HP then it makes damage to main HP pool. If many body part will be disabled at once it take only the highest number of exceeding damage. Overall It will take out enemy by disabling it’s body parts and bleed effect.

Or this is incorrect observation? I’m really tired after work and nurturing small kid, so I may be wrong. But a moment ago I hit Crabman with full HP and in hist turn he lost some body parts and started to bleed, main HP was partly damaged but not so much as body parts, but in next turn he was gone.

PS. I love to pause my gameplay with free aim pointed out on fire in Phoenix Point. It makes so cosy atmosphere in my room when those flames rage on the screen. 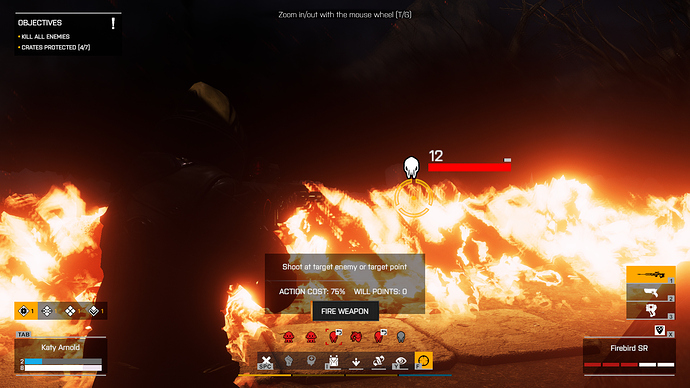 OK. So from my observation this mechanic looks like that when using incendiary grenade:

I still may be wrong and armor may take part in the calculation, or some number may be more random than i think. But my 3 tests I think worked like I have described above.

So if the randomly generated value will be 6 then we will apply like 11 damage to all body parts in just 2 turns. That is huge amount for one grenade.

But if value will be 4 they damage will be like 8 for 2 turns.

And if value can be 2 then it will be only 5 damage in 2 turns, which won’t even take many body parts (only crabmen arms and head and whole mind fraggers are endangered in this case).

So far, seems like damage sucks. It will not hit anything right next to you. The main use currently seems to be area denial, as anything you set on fire, enemies do not want to move through or stay inside of. While this is something that SHOULD be useful, in practical use, you’d be better off with a shotgun.

Yeah. I fully agree. But maybe incendiary grenades purpose was not to deal massive damage to instant kill.

Definitely it works more on body parts than full body. Also looks like omitting armor. Maybe this is OUR equivalent of enemy poison or acid attack to do other type of damage than struggling with armor. So I see two uses here.

Now I wonder if fire effect stacks. Will 2 grenades inflict double damage or not?

And will there be New Jericho Fire Extinguisher ‘Neptune’ item just like medkit?

Given the theme naming, it is more likely to be a PX fire extinguisher.

Not NJ? It is them who use fire weapons.

So they also should have means to counter their weapon if something went badly.

Oh they’d have a fire extinguisher. They just wouldn’t call it the ‘Neptune.’

You are right. I forget that PP uses mythological names.

One of the major things with fire is that it caps burning units’ Willpower at 1. This happened to my Technician when he got lit on fire. I can’t actually tell if it sets it to 1 or just gives them -5 max Willpower, but he had only 1 will point (and it was his entire white WP bar) while ablaze, and it returned to normal after it ended. I guess this is to highlight the fact that no one is gonna be able to concentrate properly enough to use such exerting or complex actions when their skin is cooking off. Perhaps this can be used as an easy way to Panic enemies, by lighting them up and then dropping their will a little bit more?

OK. I still didn’t figured it out completely, but it more likely works like that:

Enemy turn if enemy doesn’t move or is at border of fire and move out:

But if enemy is moving through the fire:

So despite my previous speculations, armor prevents damage from fire so using it on heavily armored enemy won’t make anything substantial to him.

If you will throw second incendiary grenade in the same place effect will apply again, but I think it won’t increase damage done later (so doesn’t cumulate).

So it is deadly to lightly armored enemies and can easily finish some enemies or at least nicely cripple them. And if Setokaiva finding is true the we have another purpose to use it. Enemies who panic are really welcome addition to enter that pool of fire

Thanks to both for playing around with it a bit. The willpower gives it a secondary use, but it seems primarily to be a way to put up a barrier vs small, fast, melee enemies such as huggers and pincers. Hopefully it will be expanded on a bit, as at least flamethrower wise, it’s a very high risk weapon.

I love it when they BURN… 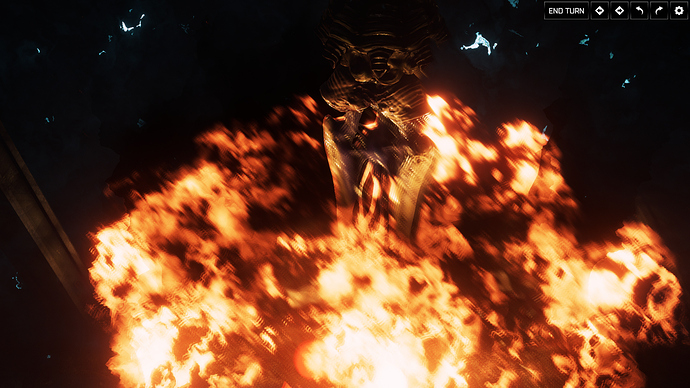 Btw. This is some kind of bug here or fire effect is quite powerful. Just look at that 47 HP Siren disappearing.

Interesting. Fire seems to apply to all limbs at once, deals damage on hit, then at start of alien turn, then again when they try to move out of fire… that’s a good 10 (2 + 4 + 4) damage or so, but that didn’t look to me like it should kill the siren. Not even with the limbs that might have disabled. The head alone has 16. And armor is supposed to reduce damage from fire, I think? So yeah, this looks like a bug to me. I’ll have to toy around with fire weapons more to know for sure.

she had armor reduced by acid from another siren

and that acid probably did some damage to body parts, when she moved she inflicted another fire damage which took her arms, thus reducing her max HP, then again that damage was applied to reduced main HP pool. But still I’m not sure if it should kill her, unless there is some logic that kills enemy instantly if couple body parts became disabled at once - I suspect something like that becase sometimes my snipers kill enemies which should endure sniper’s shot, but my sniper manage to disable 2 body parts at once and that enemy dies. But of course that logic can be also a bug.

That’s weird… When I tried to flame a Siren, she completely ignored it.
I’ve assumed Sirens were immune to fire ever since.

They are not. UI shows 0 damage when they move through it, but their health bar shrinks quite nicely when they do that.

BTW. Flame works only when it hits the ground.

With Incendiary grenades it is not a problem because they always hit something and their blast radius spreads fire abound that hitting point.

But with flemethrower you really need to pay attention to the firing cone - if its border doesn’t show on the ground you won’t see any flame and Flamethrower shot will be wasted.

In my opinion it should put aflame any ground tile below targets in the cone. So even if you will aim up with Flamethrower and in the cone will be something high like the queen or Crabmen standing on the next floor level then tiles below that target should be put in flames, so in example, ground beneath the queen or floor beneath that ‘higher’ crab should catch fire. It should even put aflame ground in the tile before any obstacle so if there is a barrel or crate or wall in the cone then tile before it should lit up.

@UnstableVoltage can you pass idea to development team how to improve Flamethrower? Because right now it is highly inferior to even Incendiary grenades and as heavy weapon it is definitely worse than all other options (even Deceptor).