Base defense mission should be harder and have big consequences when lose!

Player is advised to defend the base 24 hours before, allowing him to put 18 soldiers waiting for Pandorans to slayer them and win experience for rookies. And Pandorans all appear in hangar doing like target practice. So i sugere much more Pandorans in the attacking force (at least double, and all at same time). 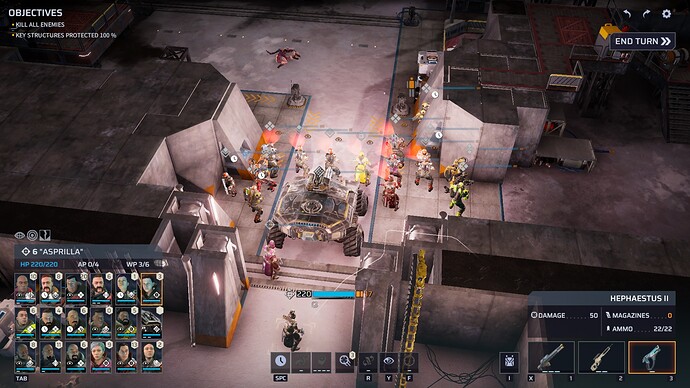 In this case, being that well prepared should give you the easy win, but I agree it could be made a little harder. Though, double the units and instant span is a bit overkill for normal sized teams.

My suggestion is to have multiple points of invasion. So, not only from the front, but one/two attacks also comes from another part of your base. You’re forced to split your troops and likely some nasty pandorans will trash your rooms. Killing them quickly would also be important.

That’s how it was in the Backer Builds and it was a nightmare! You could never get to the rooms in time to stop them being trashed.

Given how many complaints we get on this site from people who can’t rescue Squaddies or Civilians in those rescue missions in time, imagine the howls of outrage if this was implemented on Bases.

That said: there is an argument for increasing the difficulty of Base Defences on Heroic and Legendary Difficulties. I’ve argued before that the devs should double the number of Pandas coming through the main entrance and maybe have 1 breach in a room set along the outer wall of the Base on H&L.

That would also mean you’d have to think slightly harder about where to position your most valuable rooms (and imagine if destroying the Containment Facility unleashed all the Pandas imprisoned there onto the Base!).

I would love to see that second breach happening not at the first turn, but at some later moment of the mission!

As for the destroying Containment Facility it would be a super cool feature! Although I would not unleash the Pandorans all at once, but maybe one per turn (and tritons should go unarmed).
These missions have potential to become so interesting with squads of Pandorans going to Containment Facility, to Power Generator, etc.

It would also be great if we had an option to upgrade rooms with stationary defenses (something similar to engineer’s turrets but stationary). And to prevent spamming these defenses in each room of the base make them consume +1 power from the base generator for each upgraded room. It never hurts having a bit of Tower Defense in a strategy game))

Yea, you have to be very careful how you balance this, because the BB Base Defences were impossible to defend.

Imagine how pissed off most of this player base would be if every BD ended with 1 or 2 rooms getting trashed with the consequent cost of repair.

So the BD has to be challenging whilst not devastating, otherwise it becomes another rod to beat PP’s back with.

In a recent game I actually activated the base in Australia. It is too far away to reliably defend, and there would be little value in doing so anyway. After 2 or 3 assaults there was nothing left to destroy, but they kept coming anyway since everything else was destroyed already.

While they are a bit boring usually, they are a helpful source of SPs and food. What would make them harder is if they also attacked from the lift. There are 2 ways into any base as they currently are. In XCOM original they came in through the hangar as well.