I just finished Litany of Flesh research, but the Anu’s final mission didn’t trigger. Is this a game-breaking bug?

Are you sure that you did not finish Virophage Injector research? Once you get an event “Knowledge is power” (which is after “Virophage injector” research) you cannot access other faction endings. All last missions are at the same site and currently, Phoenix Point ending can overwrite other factions endings but other faction endings cannot overwrite Phoenix Point ending. This is, by the way, something we plan to change in the future in a way that you can access any ending anytime.

Apart from this, there are other requirements for Anu in order to trigger the last Anu mission:

0 -> Confirmed I didn’t finish Virophage Injector. After I completed Litany research, what happened was: description of completed research, < nothing >, then Virophage research resumed at 25%. I am expecting the < nothing > part to be the mission trigger.

1 -> what is Leviathan Chamber and how do I check if this is ever built?
2 -> Yuggothian Receptacle Research? PX finished this, not sure about Anu.
3 -> Not currently at war I can confirm.

Currently I am in similar boat (where bugs are eating at the hull). I have done every research (except the ones that trigger the endgame mission). For Anu, I did the Temple of Eanna, which I understand should trigger The Schism mission. I have fought off the ODI for 5 in-game weeks, after the other factions’ final missions were triggered.

For what it’s worth, I did submit an F12 bug report.

You need Pandora Key after the Schism and Pandoran Telepathic Nodule, but I guees you know that

The Schism is the mission that is not triggering. So I can progress any further with Anu.

If you go back , before last mission research, you could trigger it with a different faction: 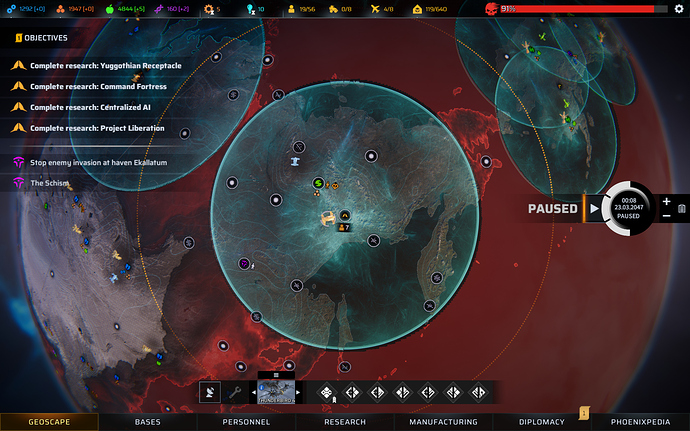 Project Liberation is on the queue, and I could complete the Schism

Also I can share save file , but I did not play last hotfix, just before

No biggie, as I’ve already done the Anu endgame a number of times. This time I put all endgame triggers on hold, in the hopes of have a save with all 4 possible endings.

I don’t know about that, but I did not defend anything since ODI 88 or before, just researching full speed, Liturgy of divine Flesh and Project Liberation at the same time, you pick your poison,
look at the screenshot, 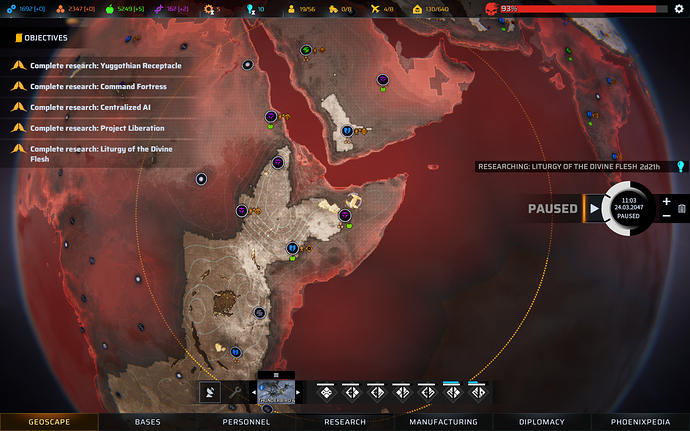 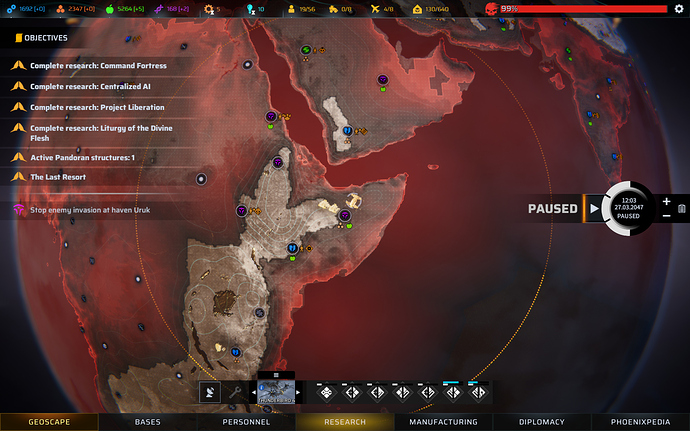 Okay, this is either a bug (or it’s by design), but some penultimate missions just don’t seem to trigger. I am in another campaign and even though I did all of the research for all 3 factions that should trigger their penultimate mission to progress to the endgame, I have 1 faction with a “failure to launch” (literally). Weeks have gone by and Synedrion will not build their launch site.

I am beginning to suspect that if the “predetermined” haven for the penultimate mission is destroyed, it can’ be triggered.

I have just re-encountered a bug that I F12’ed some time ago (and just did again). I am informed that The Schism mission is now available and is supposed to be added to the Geoscape. However, it is not on the Geoscape, Objectives or Anu’s diplomacy missions.

There definitely seems to be issues with the various penultimate missions for all factions. Anu is the only one where I have been informed is available (but doesn’t show). For the other missing ones, they are not generating the mission nor the notification.

I don’t understand, I will start the Schism now, it worked perfectly, it took 5 days to complete the Temple in the haven, then I received the notification 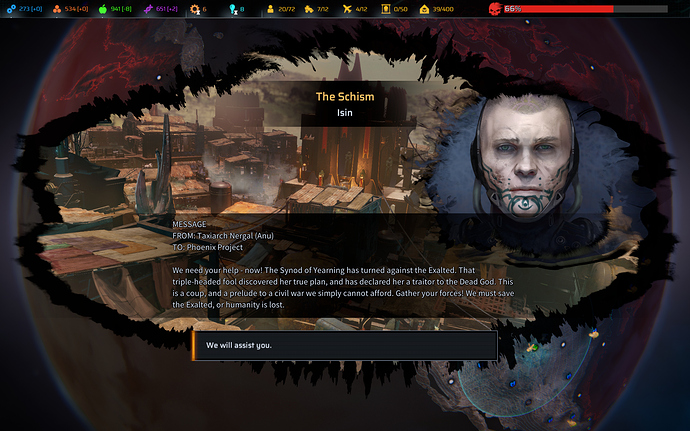 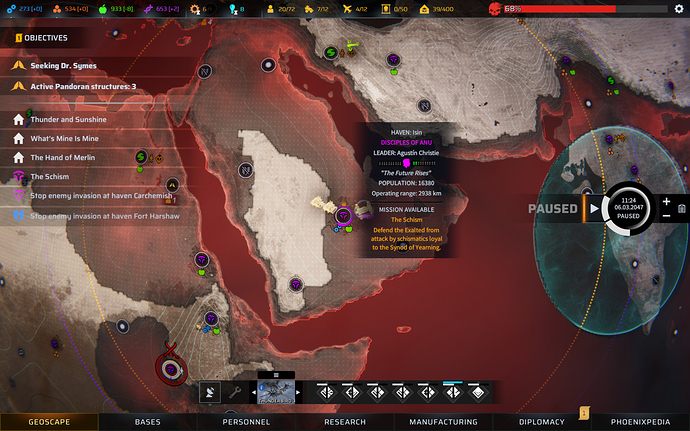 I think the problem (at least this time) is that the Exalted’s Temple was constructed in a haven that had it’s own side mission active (In the Name of the Father). I never did this side mission, so I assume that The Schism couldn’t be placed there as there was already a “mission” at this haven.

EDIT: So I decided to set the Wayback Machine back far enough in time for me to do the side mission prior to the temple getting completed. That did the trick. With the side mission out of the way, once The Schism triggered it now shows up on the Geoscape, Objectives and as a Diplomacy mission.

Definitely a bug where certain criteria are not checked to protect this from happening.