Late game research does nothing (spoilers)

I’ve noticed a couple of the research options later in the game appear to do nothing, or nothing noticeable.

See the above point, doing this research makes the boss structure. But if you complete the Anu DNA deciphering research nothing happens, which tells me either the palace for Phoenix Points virophage injector mission is the palace and I simply no longer have an option to do Anu’s end, or there’s multiple palaces and multiple Yuggothian Entities. Maybe that’s a plot twist I haven’t reached yet, but considering how buggy this things been so far I’m just assuming it’s bad design.

I was also stuck in this. I finished Syndirions Research before NJ research, which locked me out of NJ final mission. It forced me finish the game with Syndirion. I wanted NJ way. I think it’s just bad game design or simply left unnoticed in such a rushed conditions.

Vivisection (not late game but still) appears to do nothing. A phoenix point AR in the hands of a troop without any other damage upgrades cannot penetrate armour 30 of creatures that have been vivisected.

I guess that “0 damage” stays “0 damage” whatever multiplier you apply to it.

It all does what it claims, it’s just either not what you were expecting or too subtle to notice with game speed being what it is.

I guess that “0 damage” stays “0 damage” whatever multiplier you apply to it. 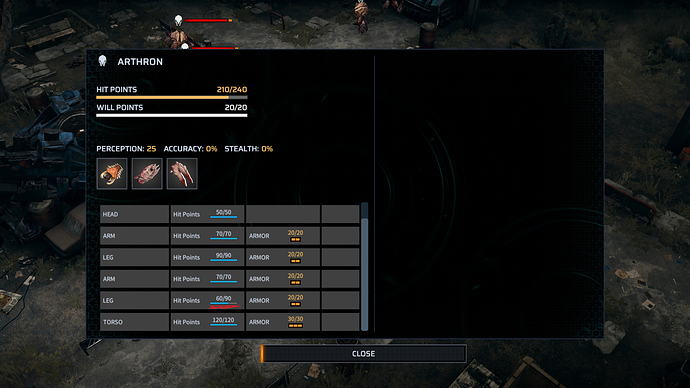 This is a the damage applied to an Arthon after being shot with the Hephaestus II pistol, which does 50 damage. Not sure if I’ve just taken your joke too seriously, but if it’s not a joke what you’re suggesting would be that this modifier applies post armour, which is different to every other modifier (sneak attack for example allows you to take down things you couldn’t even get through the armour of without it). But just say your suggestion is correct and Vivisection isn’t broken - that would mean the damage applied to the leg should be 34.5, not 30.

It all does what it claims, it’s just either not what you were expecting or too subtle to notice with game speed being what it is.

See above Vivisection reply, it quite clearly does nothing.

Every Haven assault has been at a strength of 30. If Project Domovoy did what it claims prior to researching it, which is roughly a 20% reduction in the strength of their attacks, at least some of the attacks on sites protected from mist would be at 24 - but no either these consistent attacks increased in strength at an exact value when completing this research to render it pointless (which is a fancy mechanism to make the research do nothing) or the research simply does nothing.

Without rehashing the point again, same applies for Walls of Jericho. The bug may be present for that because I stole it rather than ally with Jericho, but none the less it has made no change.

The flight speed one is hard to gauge I’ll grant that - but the in game stats of the aircraft have not changed, and the fact even with that upgrade, and all the other defensive upgrades, havens are assaulted and die before I can get halfway across a continent shows they’ve either allowed themselves to starve and have no defense, or this upgrade has as the in game stats would indicate - done nothing, or it all works, and the game is just poorly designed to make havens impractical to keep alive. I’ve got a little short of 1 aircraft per continent (Australia is on it’s own) which I’d think should be plenty to defend them. Either way, there is a problem here that needs to be addressed.

In deed, re-reading my comment seems sarcastic.
My guess is indeed that it may be applied afterwards. Therefore you get 0 damage x 1.1, still 0.

I haven’t verified myself, had forgotten about vivisections. It would be nicer of course if it worked like infiltrator’s 100%.

Give it a test yourself. That screenshot as mentioned shows a shot with a pistol that is meant to do 50 damage base doing exactly 50 damage to an Arthron. Armour 20, 30 damage applied to the Arthon, therefore there is no 10 or 15% modifier (can’t remember which it was meant to be) before or after damage.

I’ll see in my campaign, but indeed it seems that it is not applying at all with your pistol shot.

“Walls of Jericho” research states that it’ll reduce the strength of attacks on my havens by 1 - it has not. It also appears not to have helped New Jericho either.

I am also not seeing any reduction in enemy attacks on my bases. If anything it actually seems to be the opposite.

Project Domovoi (whatever it’s called - reduction in attack power of colonies in range of a mist repeller) does nothing - their attacks on havens are still at the exact same strength. The description for this research is also unclear on how it works so who knows, maybe it only affects colonies built outside of the mist where they can’t be built…?

From the horse’s mouth:

… can disorient the Pandoran forces, disrupting the communication and making it harder for them to coordinate their attacks.

This would mean that for a haven to be attacked inside a mist repelled zone, the enemy base would be within range. Or does it mean within range of the actual repeller haven? If the latter then Mist Repellers are basically useless, other than preventing an enemy base to be created in the range of the repeller.

Thanks mcarver, that’s exactly what I’m talking about.

I have picked up the game again post the acid damage increases, it’s interesting to play for a big but again you hit late game and it’s too much the same - without research doing anything the late game is no different to the mid game, it just drags.