I am unable to load any saves. I get, “An error has occurred while loading the game level”.

I’ve tried 2 dozen saves into the past. The first attempt gets that error. The second attempt crashes the game.

I uninstalled and re-installed the entire game, and re-downloaded the cloud saves, and repeated the process. I even used saves that worked 2 days ago when I last played, but now reproduce the error.

What happened? Here is a screenshot of the error: 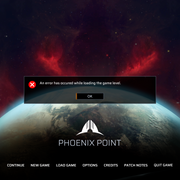 So I tried a bunch of things, including the cloud saves suggestion. Nothing worked. What finally seems to have fixed it… I started a new playthrough and saved the game.

I saved it as “New Play”, and then went back out to the main menu. When I selected that same “New Play” save to load. Instead of it loading me into the new playthrough, it loaded me into my old playthrough - the save just below it that I could not load and always got an error for if I tried loading it directly.

I don’t know why that fixed it. I just hope it stays “fixed”.

If your campaign started before the cthulhu patch, it’s best to start a new one. This patch changed a lot of things and older saves may break in a number of ways. The newest patch may have made things worse for these older campaigns too.

Nah. This campaign was started 2 days after the Cthulhu patch. I made sure everything was there. I bought the new DLC as well. And then I started a new playthrough.

Did it stay fixed?

Fortunately, it seems to have stayed fix. I’ve encountered nothing weird since the above “fix”.

Good catch then, I hope this also helps others.

Can you recruit soldiers after last patch? I see only white figures next to havens.

Normally white figures means that they are building the training facility but it isn’t ready yet. Sometimes this happens simultaneous on many heavens when they have recently researched their special classes (Priest, Infiltrator and Technician).

If you have this on ALL heavens then it is probably a bug (that doesn’t happen to me).

I’ve been able to recruit soldiers both at havens, and from the personnel recruitment tab.

I’ve updated the title of this to make the issue more searchable if anyone else runs into it.