Aliens move too much, free-aim misses

It’ll be obvious to you once you realise the bell curve you’re thinking about is the integral over concentric circles, whose circumference grows linearly with their radius …

@JMPicard
Between this and your other post it’s quite clear that you’ve got a very good understanding of mathematics, which I clearly lack, hahaha. I don’t know if you’re studying it or whatever but I really only have a basic understanding of maths. I don’t think I really understand the relationship between the theoretical calculus and it’s practical application, which is why I have no idea what you’re saying since you’re talking pretty much exclusively calculus.

(either that or you’ve cut it in half down the middle and placed it end to end, where the centre has 33% chance and the outermost extremities have 33% chance. This also wouldn’t make any sense though. Why would the very outer edge be as likely to have bullets land in it as the centre of the circle?)

This would make the developer’s comment was wrong: “The spread within the cone works on a bell-curve with highly inaccurate shots being as unlike as highly accurate shots (meaning that most rounds will tend to fall somewhere close to halfway between the red circle and the bullseye)”

You also say at the end “After all, this is such an intuitive way to implement inaccuracy I’d be highly surprised by any other choice”, which suggests that you’re assuming this is the way they did it since it seems to be the most sensible way to do it in your eyes. However this doesn’t necessarily mean that this is the way they did it. From the developer’s quote it seems very likely that they actually do it a less sensible way, where bullets very rarely hit the targeted enemy or body part and instead are far more likely to hit around it.

or you’ve cut it in half down the middle and placed it end to end, where the centre has 33% chance and the outermost extremities have 33% chance

The spread within the cone works on a bell-curve with highly inaccurate shots being as unlike as highly accurate shots (meaning that most rounds will tend to fall somewhere close to halfway between the red circle and the bullseye).

Nobody “officially” said that the “center (yellow line) has 33% chance”. There are numerous “bell-curves”, and mapping that to a target-circle makes it interesting.

You have a small circle and a big circle. You can compare their radius and their area. If the [smaller circle] has a smaller overall area than the [big circle minus small circle] (so the “band” between outer and inner circle) but each bullet still has 50% chance of hitting the inner area, you have a (relative) “accurate” weapon, while if the area of both is the same, you have a “less accurate”.

We can compare the radius of both circles, but while that will tell us the same, it’s harder to imagine for most ppl, because we’re comparing a circle’s area to a “band’s”, which is hard to visualize accurately in your head.

The chance of hitting inside the circle is the sum (integral) of the area (between the curve and the 0 coordinate…line? I’m not native to english math…) of “the” bell-curve from one side to the middle, if the middle is the inner circle. There was nothing saying that you will hit dead-center the most with an accurate weapon, but that 50% of the shots will be inside the inner circle.

Saying that aiming with the inner-circle as “accurate” is a good idea is misleading. If you imagine the inner circle’s area as lots of circles, and every circle has x% chance to get hit, you must calculate with the length of each circle (circumference) too.

So I’m just saying that working with a bell-curve is not necessarily bad, if it’s done right. And we should have faith in the devs, we backed them for a reason.

Well I mean one can have faith in the devs but that doesn’t mean that one has to agree/like everything they do. I’ve somewhat covered this in my feedback thread about the system, but I’ve used a similar system in another game (something like 20% of all shots were guaranteed to hit the outer most circle) and it wasn’t very enjoyable. The bell curve is also counter intuitive for aiming but I’ll cover that later when I’m not on my phone and can get some in game SSes to illustrate my point.

Ok, yeah, sorry. There was no reason to think it would be 33% or anything like that. I think I was using it as an example earlier and got it muddled up with fact later, haha.

I understand what you’re saying about the area of each circle and how that translates to more or less chance when they have 50% each. When it comes to visualising the graph and the area under the wave as a bullet spread pattern it can be a bit hard to visualise. The way I understand it is that the first half of the graph is aligned with the inner circle’s (the yellow circle’s) radius and the second half of the graph is aligned with the red circles radius. So that the crest of the wave falls on the point where the inner circle and outer circle meet. Conversely the trough of the wave would therefore fall at the centre of the inner circle and the outskirts of the outer circle. The area under the wave at any given point would be the percentage chance for the bullet to be shot in that direction. This would all be divided by 360^ to give the bullet that radial spread instead of it being on a single axis.

Hmm, my issue isn’t the distribution of the shots. I’m fine with 50% being in both the yellow and the red, however at the moment, with the way I understand a bell curve and the way it would be integrated, it seems like the majority of shots will land on the meeting point between the yellow and red circles. This might not be so bad if, as you say, it’s only taking the very top portion of the bell curve so that the percentages are much more spread out rather than going from 0% to 50% it goes from 20% to 50% or something.

This might not be so bad if, as you say, it’s only taking the very top portion of the bell curve so that the percentages are much more spread out rather than going from 0% to 50% it goes from 20% to 50% or something.

We don’t know exactly “which” bell-curve they use. It may be possible that the difference between Inner Circle and halfway between inner circle-bullseye is 1%. It may be 50%. We don’t know. And that’s my problem. people tend to imagine the “worst possible”, not one which may provide a fun game after balancing/tuning.

Isn’t it possible to have animations freeze in a default position when aiming and taking shots? Animations are good aesthetically, but having to wait until the animation has the enemy the most exposed before taking the shot really drags the pacing of the game.

You are still thinking 1 Dimensional. To make it perfectly clear here: no it does not (necisserly) mean that it will be most likely to land on the yellow line. That fully depends onyour definition you choose.
It might be more likley to land somwehre on the yellow line but that yellow line is a lot bigger than a point isn’t it?
So what they try to tell you here:
NO YOU SHOULD NOT AIM IN A WAY THAT THE YELLOW CICLE WILL BE ON THE POINT YOU WANT TO HIT!

I know I suck at explaining and this is not obvious or easy to get so I guess tha is why everyone faild to explain it before me. However In shots to random @lompabo pointet it out excellently.
Here is an image from what he uploaded on git. (I hope I may use it here?) 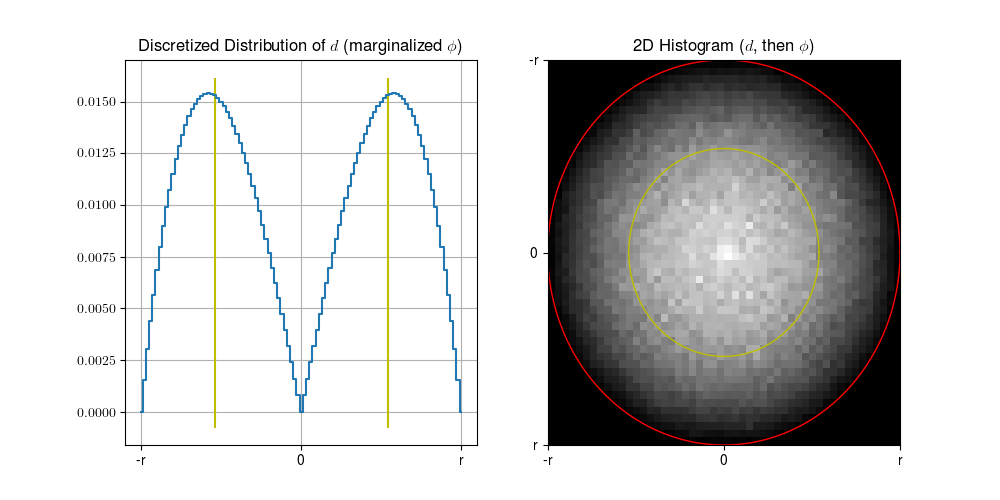 Darker areas are more unlikley to get hit. as you can see it’s most likley to achive a hit if you aim for the center. (right figure)
Even so the curve it’s run on is exactly as @UnstableVoltage explained. (Just look on “half” of it, for example the poitive one as the other half is semtrical you can achive it by making your angle go from 0-360° (full circle) instead of taking 0-180° (basicly yoou get two half circles which is still a full one)).

This is how you too want aiming to be like if I get you right.
However it is still posible to not hit the center, infact most shots will not hit close to the center (which ist pobably why you feel they are son inacurate), but it ist still the most likliest place to hit if you compare it to an area the same size.

I hope this helps you somwhat!

I can confirm this bug. I shot a Pistol with my sniper at the Queen’s leg, she unexpectedly stepped it to the left, and the shot went wide and missed.