Another bug with points not being given out for successful completion of a mission goal. 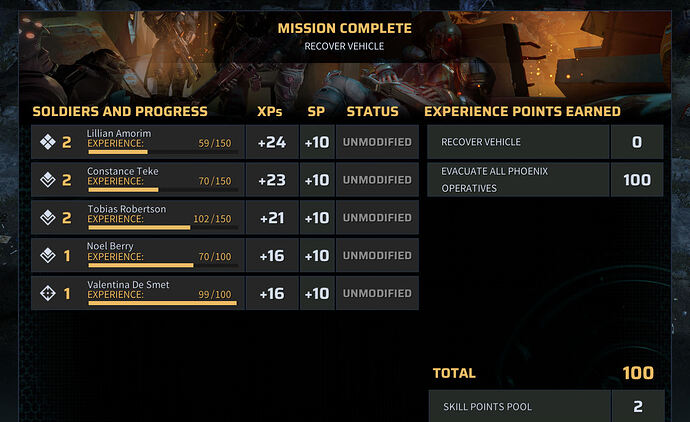 This is one of many that I keep discovering. Without being able to report the issues with F12 anymore, do you know what we should do?

Other than posting here one can also post in the Discord Phoenix Point “bug_reporting” channel. The devs are just discovering that F12 is not working for some, but it still works for others. Hopefully they can track it down pronto and roll it out with the next hotfix.

I’m sincerely a bit disheartened. After a month of not playing, I was hyped to go back to it, but found so many new bugs just by trying the new stuff that I quit without even playing. Snapshot should increase their testing efforts, this’ll go very badly with the steam crowd.

Need to wait some weeks more for steam launch.

I can only hope that, with the Steam launch, they eventually unlock the workshop so people can start modding it, so we can get people to fix all the crap they don’t want to fix themselves.

So it’s a known bug. Ok, I’m just confirming that this still an issue.

I encountered this as well, and I think I know how to reproduce it:

It happened to me when the vehicle was the last ‘soldier’ to evacuate. The ‘Mission End’ trigger apparently fires before the objective is checked, and so it remains uncompleted and you receive 0 XP.

When I went back (I made it a habit to manually create ‘autosaves’ at the start of each turn) and made sure to evac the vehicle first, the objective completed, and I got the XP. Hope this helps!

Recover Vehicle should give your 300 EXP.
Once I had a Rescued Vehicle being the very LAST to exit the map and got ZERO exp for the Recover Vehicle. Maybe that was what happened to you. It even said FAILED when I exited the last vehicle, thought the debriefing screen said I succeeded.