What does Phoenix Point do better that Xcom 2?

I only played Xcom 2 (and not the other Xcom games). I really like Xcom 2. This Phoenix Point - what has it to offer that is better than Xcom 2, and would I like it if I like Xcom 2? I know you can’t tell if I’ll like this game, but maybe some of you like Xcom 2 and also like this one, and can tell me why I should support it, although there isn’t much of a game yet.

Well, I think Phoenix Point will be a different game than Xcom2 (or the Firaxis-Xcoms), not necessarily better or worse, this is up to you to decide which one do you like the best.
The major differences will be the implementation of “physical” bullets, insted of a priori chance determination for shots, and the more strategically relevant geoscape gameplay, more similar to the UFO series (old Xcoms), with multiple bases and so on (not much is known about it yet).

I suggest to go and check the video and press threads on this forum which have a collection of material about Phoenix Point which may be more precise than what we -invested supporters/players- can give you.

*At personal level I recommend you RetconRaider, who made quite a few videos about Phoenix Point, trying to analyse what we could expect to see in the game and the lore from the short-stories

I loved XCOM: Enemy Within and XCOM 2, but honestly, even with just the tiny second demo I’m enjoying the battles in Phoenix Point even more. I really think it may be the greatest planetary defense simulator of all time, but I say that a lot. So here’s what I like about it:

1: The TU system isn’t as complex as it was in the original XCOMs, but much more granular than in XCOM 2 (which is just move-attack). It’s really appealing, best of both worlds.

2: Actual modeled individual bullets and free aim, so you have to worry about friendly fire, but also if you position yourself well enemies will hit each other, which they didn’t usually do in XCOM 2. Also the free aiming system is so much fun IMO.

3: Body parts! Instead of just enemies (and player units) which are living/dead, in Phoenix Point you can wound and disable everybody, which really makes the gameplay more complex and engaging–even if a shot can’t kill a foe in one hit, if you aim for its arm well, you can knock out its weapon. Very cool, IMO.

4: Modular enemies! This is what I’m most excited about. In both the original XCOMs and the Firaxis XCOMs, there wasn’t that much replay value–you’d see essentially the same Sectoids, then Thin Men, then Mutons, etc. every playthrough. In Phoenix Point, however, every part the enemies AND bosses have is modular! So you might see crabmen with grenades one playthrough, guns the next, shields occasionally, and so on, and the same with bawsses: The big Queen right now is just a melee unit, but in the actual game she’ll have all kinds of different spider legs, claws, heads, and even biological cannons that will change from playthrough to playthrough–IIRC, there’ll be like 200 different variants of her that can be created from different parts (legs, head, arms, etc.) so no playthrough will be even remotely similar!

So yeah, those are the gameplay reasons I’m excited about the game. In terms of plot, there’s a diplomacy feature in the game where you have to interact with different factions far more in-depth than you did in War of the Chosen, there’s a TON of awesome Lovecraftian lore (that the Firaxis games didn’t really have), lots of independent havens, an ability to sort of set your own goals during missions instead of worrying about satisfying funders, and so on. I’m really hyped for this!

My favourite tactic is to sniper the machine guns from the crabmen so that they walk around all useless. Cannot do that in the NuCOMs.

Also with regards the the number of variations of monsters, a crabman can have 3 heads, 3 torsos, 3 left arms, 3 right arms, and 3 legs, or 243 variants.

The pincers and legs are the same I think (i.e all the legs are the same and the claws are the same type, i.e she’ll always have dual claws, dual cannons, etc). So 3 heads, x 3 torsos, x 3 carapaces x 3 pincers x 3 legs is 243. Not quite 729, much less 531k, buy still, 243 queen variants alone is more than the total number of enemies of Oldcom and Nucom put together

Think of the diversity when all the minor enemies and other boss types are included!

you forgot the abdomen, aka her butt

OK, I couldn’t keep my hands away form it :)

So far, so good

Which sadly are still just 2 crabmen and 1 queen…

There’ll be a TON of other enemies, though. Juggernaughts, Chirons, Sirens, Floaters, Pianists (mind-controllers), and so on, and so forth. This game is gonna be BIG 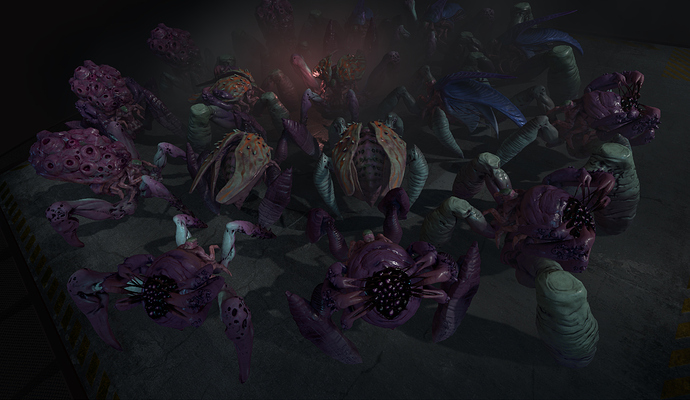 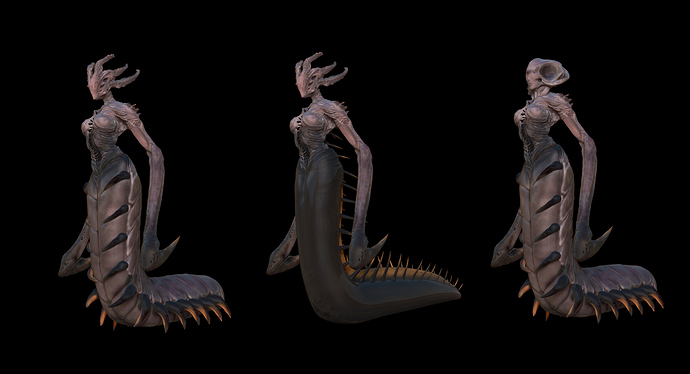 And a lot more!

Vanilla XCOM was pretty good about sticking with a gritty-ish resistence versus an established, numerically/technologically superior force.

Then came the Alien Hunters DLC, which encouraged dressing your soldiers up in campy snake-suits. Then there were the robots of Shen’s Last Gift. Then War of the Chosen came out, and the XCOM soldiers were now superheroes, some of which could annihilate half a dozen enemies in a single turn with a sword like a n anime character.

None of things are bad in of themselves, but XCOM 2 suffered a little bit for having half a dozen tones slapped together.

Phoenix Point, on the other hand, seems to have a better idea of what it wants to be. It’s picked a tone (lovecraftian horror) and a few themes (the fact that everyone wants to do good but cannot agree on what “good” is, ideological differences preventing people from working together, a struggle to make sense out of an increasingly insensible world, and good old-fashioned strength in the face of adversity) and it seems to be sticking with them.

And few more things that were announced and, I think, not yet mentioned here:

Also with regards the the number of variations of monsters, a crabman can have 3 heads, 3 torsos, 3 left arms, 3 right arms, and 3 legs, or 243 variants

I was wondering if the game should distinguish the variants with the automated enemy labels? So you could see on the battlefield there is an Agile Crabman Machinegunner Grenadier, Heavy Shielded Crabman Brawler etc. or there will be all Crabmen to the player.

The names that the various variations have will be named by the player.

I think alien types might be labeled “???” or “Enemy Unknown” (heh

) until the player performs an autopsy on them and names them. However, for players who don’t want to go through the trouble, it would make sense to have an auto-generation feature for names.

I think alien types might be labeled “???” or “Enemy Unknown” (heh

) until the player performs an autopsy on them and names them. However, for players who don’t want to go through the trouble, it would make sense to have an auto-generation feature for names.

If I remember correctly, in one of the videos they said the aliens will have random names, like type123 or something like that, and then you can rename it if you want.