What am I doing wrong?

These may be noobish questions, but I haven’t been playing the BB’s just to be completely blown away on release. And I was, for sure. The game is awesome and I really enjoy playing, but it seems that I’m stuck.

My current game status is:

So I’d say i’m 1/3 into the game, but my issue is. How do I get new equipment? I’m still using basic PP weapons, the enemies are hard as nails and I just don’t feel like I’m making any progress. I know I should be friendlier with the factions, but currently they’re all at war with each other (NJ is obliterating EVERYTHING) and I don’t want them to turn their heads towards me.
I have access to the Priest, Engineer and basic Synedrion weapons, but I can’t do anything with it.

When will I get better pew pew’s, some better armour, anything? As of right now when I meet a Arthron I have to focus 3-4 guys and MAYBE I can kill it (or at least disable it’s arms), Tritons one shot me after coming out of stealth. The sudden difficulty spike is just harsh… And the sirens, omg the sirens give me nightmares. Yeah sure I can deal with one of them with one dashing guy with a shotgun, but then he’s all exposed.

Also catching live specimens gave me absolutely nothing, as 10% more damage is silly to say the least.

Also NJ wants me to sabotage Synedrion, but Synedrion has these awesome antifog technology. They don’t like me, but I still want them, is there any way to get this?

Any tips? Should I start over or keep on going? I enjoyed the game so far, but last few hours gave me a headache.

this thread on reddit has some excellent advice for new players

You can raid a faction’s Research Center to gain technology, or Ally with a faction and they will share all their tech with you for free. Just click in research and it is instant. If you capture two pieces of tech you can also reverse engineer it. Also you can steal aircraft as well.

Well guess I need to be a bad boy to win this game, a bit shame you can’t all play together. Thanks for the tips guys!

oh well you can in theory befriend everyone. It’s all about how you deal with texctual choices and political moves.

Saving as much haven as you can and you’ll up more reputation with factions that you’ll loose with other, so in time you’ll raise them all. ^^

Still, the’ll end up fighting eachothers (i don’t think it’s avoidable but i may be wrong) and i suppose latter on they may just destroy eachother, witch isn’t much an issue once you have all their techs ^^’

Another question. I’m hitting the lair mid game. I’m trying to be cautious and deal with it slowly and steadily pushing on. I’ve already killed 3 sirens, a Chiton, about 5 Arthrons are dead, 2 Tritons, one Terror thingy too.

About 6 more Arthrons are waiting, two more Tritons, they’re all panicked, but still I get a bit swarmed. The map layout doesn’t help with advancing much and I feel like it’s FUBAR as I took too much time and they’re spawning every turn. Am I right? Are they spawning? If so… then this is unbeatable.

Yeaah, this is totally fair. 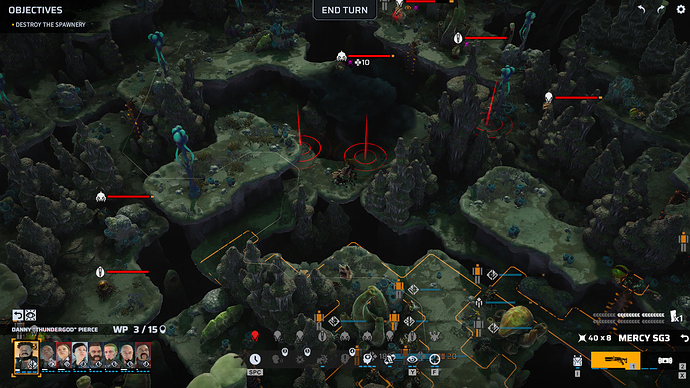 yep, they do spawn at almost every turn, it’s mission intended to be a push through ennemy nest instead of the more common “wait in overwatch and see how it will evolve.”

In nests you have to act quick, take some risk, use furtivity if you have, or use and abuse jetpack of heavy armor to just skyrocket in two - three turn right into the nest spawnery, then make it boom with a canon / gatling shot ^^

I’m so screwed then… Well back to the drawing board.