War against other human faction never happens unless human play dumb for it!

Devs should turn it in a real possibility.

Actually you have another way triggering war, instantly.

For City Upon a Hill and the Schism, you start the mission, but you evac, you don’t kill the enemies, that has consequences, permanent war.

In theory it is the same with Moonshot, but it is bugged. 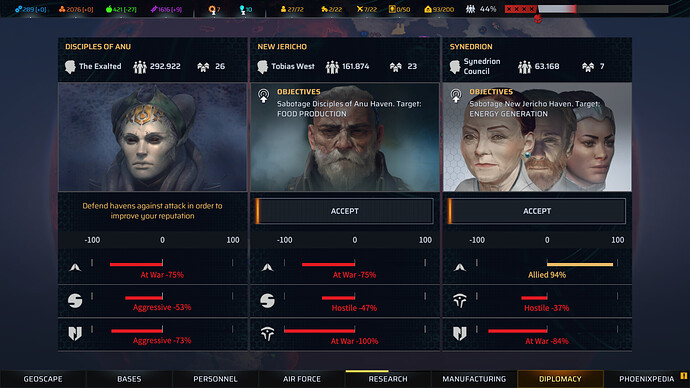 Yup, I hear you. Right now we have comedy western: “These bandits…! They have raided saloon again, drink all the whiskey and steal the cattle… Eh, but thank God they keep indians at bay.”

A lot of nice ideas. I don’t agree with everything as they orbit mostly around reputation and faction relations, but they feel at least pretty solid. For me, “raid a lot” should never be an option. You raid? You don’t just get bad reputation, you get a faction enemy and immediate retaliation(s). Want to befriend them again? Survive retaliation and build up trust again. Raid again too soon and be damned forever. Early craft steal shouldn’t be a neglible diplomatic faux pas, but declaration of w…

Well etermes, that situation are in endgame as you know better than me… that not affects much in that part of game and it is almost impossible to happen (not kill an enemy and evac!!!).

What would be great was in begging of game, if player abuse of attacking one faction (steal more than 1 aircraft and 2/3 raids of resources/tech for example), they declaring war on him.

I asked the same in the past but I have the feeling devs don’t want to implement hard consequences, in general diplomacy is disappointing in this game

I agree with you. But i am expecting they implement hard consequences on attacking other factions in the planned patch they announce at Canny. Attacking faction havens should have worse consequences | Voters | Phoenix Point