I miss the Bugfix of the “Thief”-Perk.
If you buy it, you will get only the Movement bonus. The 25% Stealthbonus is never received.
Neither before Tactical Combat nor within. Not in the InfoBox and not in Game. My Soldier with Stealth was earlier seen (75% Stealth, should be 100%) than another without Thief (85% Stealth)

It works as intended, I have no problems with Thief and I use it always when I get it.

In the Info screen in personal tab out of tactical combat it shows 75% because the 25% from the base Infiltrator class perk is only added in tactical when he is not revealed, so it is not a static value:
Base line stealth factor is 25% as long as the character isn't revealed

In tactical an Infiltrator with Thief perk has of course 100% as long as he is not revealed and equipped with stealth armor/augmentations: 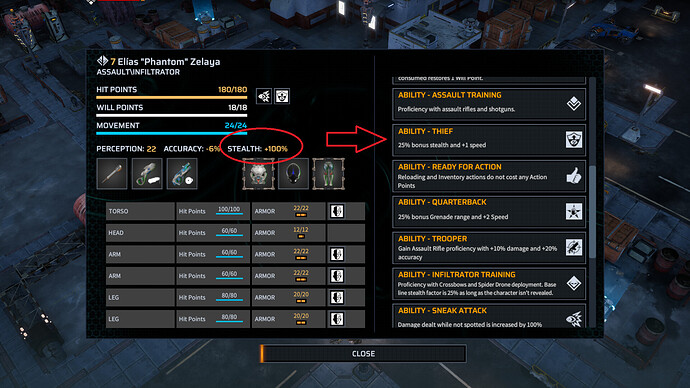 Edit:
Don’t misinterpret the 100%, there is an autoreveal at 5 tiles distance regardless how high the stealth is. The only exception for this autoreveal is when the Infiltrator used Vanish, then he can go direct adjacent to any enemy (for instance for melee attacks).