The Dash nerf is the final straw

I can somewhat understand the need stop dashing multiple times in the same turn, but the way it was changed in the latest patch completely changed the game-play, and I dont like it at all.

Before the nerf you could use dash in to advance and double shoot with wither an Assault Class or Sniper (Using Quick aim). Now that Dash costs 1 AP, you are severely limited if you need to ensure a kill, and can only use Dash offensively if the enemy is a sure one shot kill.

Such a small change with such a huge impact on gameplay.

Combined with the insanely frustrating Lair missions, I have just had it - Its not fun for me any more.

Phoenix Point it was a nice try, but ultimately you failed.

I still haven’t played the game, just checking forums occasionally to monitor progress of patches/balancing. So just from reading stuff, it looks to me like dashing, that is running around on the map, did not cost any action points before the patch.

Did this mean you could potentially dash unlimited times per turn, basically moving around the whole map in one turn? That sounds absolutely ridiculous. A turn is supposed to represent a certain amount of time. How could soldiers just warp time and teleport around?

So, that dashing should cost AP seemed kinda obvious to me and I can’t fathom why it didn’t before?

We where asking the same question. The only limiting factor was Willpower but as you can recharge it by killing or stepping into the point of interest you could theoretically keep dashing till everyone is dead. On some particular builds it wasn’t even a theory.
I understand OPs frustration but imho how it was before might look powerful at first but eventually leads to boredom.

You still can run 300% further in a single turn while using dash, it’s just that you won’t have any AP left. But this on its own is too much in my opinion. While it’s a not a high end ability for assault, it still a bit jarring that a rookie is somehow 3 times slower than a level 4 (?) soldier. A bit too gamey.

I suppose that Snapshot Games made a mistake providing Dash in it’s form in full release. Players get used to run all over the map and make 2 shots, as it should be guaranteed for any combination of classes with assault.

Dash is 2nd level skill which should only let your assault move that small additional amount of space to adjust your line of fire.

At least I think about it like that. It should not be used to charge toward enemies, put holes in them with a shotgun or heavy cannon (or sniper rifle), and get back to your safe position.

Now when all the nerfs will happen (in recent and in next patches) players will shout that it is no longer fun to play the game. That is happening when you let the players to become unstoppable and then you take it away.

“Dash” in its old form (and the even more OP forms before that in BBs) removes a lot of the tactical aspect in the game. With enough willpower, you can simply go kill someone without taking risks.

In FiraXCom for instance, when an assault/ranger uses “run&gun” (equivalent to dash, move, shoot). But he doesn’t have the possibility to “dash” back if there are other enemies nearby. So it is a high risk/reward choice that needs to be weighted.
Here, no risk, you go for the high reward, if risk appears simply dash back (it is partly paid in WP by the kill you just did).

I find dash still very powerful in its new form.
Next stop:

As you can read in this post, I am enjoying the game again after last patch: Just had a fun run in a Lair!

Regarding dash, I don´t use it yet, as I have not muliticlassed much, but you could still dash in and shoot up to 3 times with an assault/sniper using quick aim on your shootgun … just a choise of how to spend your skill-points. Then your Will-points will limit times of use.

Not quite shure OP-holes have been closed. But anyways, may main point is, so far (23-gamedays into it) I am happy with latest patch (and its possible change to balance of Dynamic Difficulty).

Thanks for your replies, and I do actually agree that to old Dash was OP. But, there is a but, I am sorry, from my perspective as a relaxed non hardcore gamer: I find that nerfing Dash (and Rageburst) without addressing the major RNG difficulty level problems that this game has, was a foolish idea.

There are so many problems with RNG, some times mission are ultra easy, other times they are almost impossible, all depending on which random enemies that spawn.

I am the not the nerdy type of strategy gamer, I never fully comprehend all the detailed aspects of every enemy/ability etc., and typically end up with a few ways to overcome each enemy, and use them a lot, and I have fun with that. I relied heavily on Dash and Rage burst, but they are now nerfed, but the Pandorans are still, with a few small exceptions, unchanged.

Currently I am failing at defeating a Pandoran Lair, that has multiple Sirens, and a Plasma Bomb Chiron, with a Level 3-4 team, if I at any point get hit by a Bomb volley, my troops loses several limbs = no two handed weapons = combat inefficient. As I have no Technician among my troops there is no way to recover. Without the mobility that Dash gave me before, I cannot see how to complete its mission.

It is just a possibility, but perhaps your use of Dash in the past has raised the Dynamic Difficulty of your current playthrough to a level of Pandoran activity/evolusion, that you will now have a very hard time to fight … I restarted game after patch. Not sure it scales down IF there was a change to balance.

Edit: I am not in any way supporting the fact that PP was released in a state that requires so big changes, that players may have to restart thier games, just suggesting it may be the reality!

I cannot see how to complete its mission.

You need to wait for further “nerfs”. This time mostly on alien side, but on player side too. You need to consider current Phoenix Point as the game still in development and that there may happen huge changes. Even so huge that it will require starting your campaign over again to “bring balance to the force”.

Before it was easy to rely on it for nearly everything, and now it’s got its specific circumstances where it shines. Dash+Cannon, Dash+Sniper, Dash+Shotgun+Dash/Move to cover (where you can still Rapid Clearance multiple enemies nearby without moving if positioning well enough, and enemies are weakened enough either no armor/shredded + good talents to buff the dmg), Dash to hide, Dash+PDW(SelfDefS)+Rapid Clearance on weakened enemies is still similar to the old version with shotguns.

I’m liking the change, feels more properly balanced. I’m not using it all the time, but still using it quite a bit.

Yeah. After starting a new campaign and testing these changes, I like Dash better now. I’m not basing all my tactics on Dash anymore, but it is useful often enough. The only thing I’m not entirely sure of is the Willpower cost, I feel like it could be slightly lower. Currently, pushing yourself to run farther than you normally could takes more Willpower than using newly-learned psychic abilities to cause panic in alien creatures.

I like the new Dash. But it is just harder to use the shotgun without too many risk. Run to an ennemy and cripple him is not enought with arthon. You fail to destroy the arm you get killed with return fire. You destroy it and can’t flee, you get killed by two poison attacks. Before you could get away more easily. Now you cannot use safely the shotgun if it is not a reliable kill.

SR should take down a target at long distance and should have the best accuracy compared to other weapons. What I like from previous version of SR is that they can shoot target at tiny gap/hole between objects, now…most of SR second shot is suck. - sorry OOT

Current game now is like Run & Hide than, Run & Gun.

I totally disagree. Magic willpower teleportation was definitely useful, but rather silly. Regardless of how fast you move, you’re still taking time to cover ground, so spending an AP is totally justified. Yes, it changes gameplay, but in a good way. It’s still super useful — I just use it differently. You just can’t use it to bail yourself out of a bad position anymore. 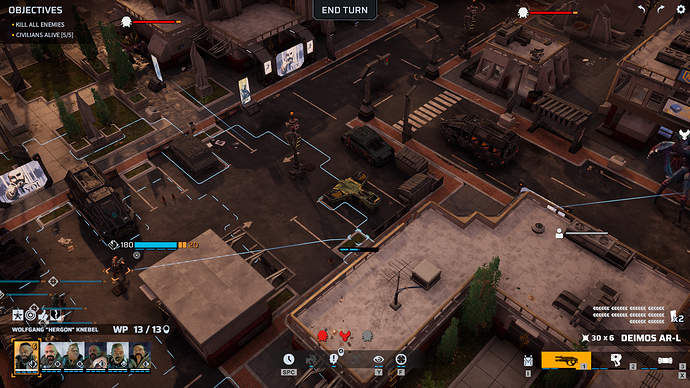 This is a shot of the opening situation, no moves have been taken yet.

My team are all huddled in the lover left corner. They are within view of two Explosive Bomb Chirons, and one Spitter Head/Mindfragger Birthing Scylla, that has an effective spit range of 20 with Poison and Goo. The map in 50x50, and the buildings are destructible.

If I enter a building I get bombed and it gets destroyed in 1-2 turns, if I dont I die.

*have had building a collapse around me = die, and even before that the Scylla spits goo and poison though a window.

I have been gooed and bombed trying to reach one of the taller building in hope it would last longer.

What is the point???

So how would you survive this without loosing any troops?

First, I wouldn’t have tackle an extreme threat level mission with 6 soldiers. Run away!

Next, they won’t alert until you shoot at them. Get into the buildings ASAP (dash is good for that) and they may even end up moving away from you. They definitely won’t fire until you’ve been spotted.

Finally, some missions are just not worth the risk. I might bail out of that mission even with a full 8 person team. Brutal set up. It doesn’t happen often, but when it does, discretion is the better part of valor.

Me also. I like that it now requires AP to use, but I think the 50% boost to movement was already more than enough.

This is a shot of the opening situation, no moves have been taken yet.

Where was retreat area, close or not?