I only just start playing 6 weeks ago or so. The soldier selection screen on mission deployment was just but then disappeared. Now that side of screen is just blank so I can see list of soldiers and any equip icons. After ctuhulu, still blank on that side of screen. Any ideas? Not a big problem now but will be when I get to point of having more soldiers at a site than allowed so I have to pick and choose who to bring.

Did you verified installation in Epic Launcher? Do you have any mods installed?

I’m playing on XGP. Crap, I just realized that it’s the personel screen that is blank everywhere, not just squad deploy. I don’t see any other reporting this so it clearly just me, but boy that’s weird. What would cause this? 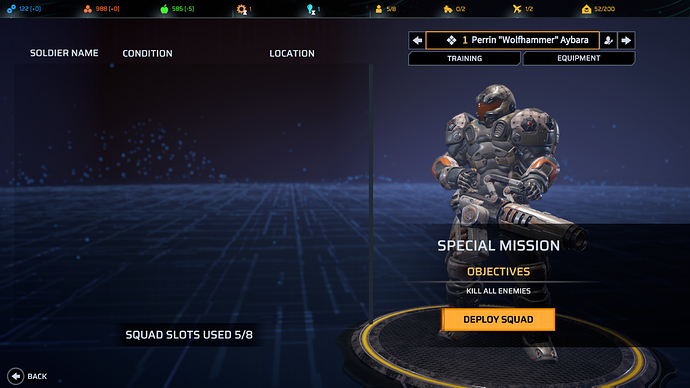 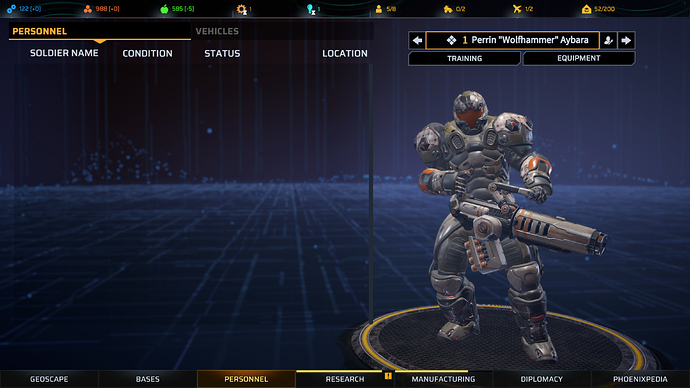 Maybe this is happening to many more b/c I guess it’s rare to not check Personnel at some point before deploying.

Whenever I resume my game, if the first time to display squad list is the deploy screen, then squad list is blank and also blank everywhere including personnel tab.

Not for me - I usually quit right before next tactical mission, which means deploying is usually the first thing I do after loading. Are you positive that the game just didn’t finish loading yet. for me it takes time after initial load before personnel/inventory loads - However, that has to do with assents (character models) and I don’t remember manu itself ever not displaying.

Well I can definitely say that once I have a blank screen on Deployment, the squad list screen is always blank forever, until I exit and then continue game again. What kind of time are we talking for loading all the assets? 15 seconds? less or more?

Well I can definitely say that once I have a blank screen on Deployment, the squad list screen is always blank forever, until I exit and then continue game again.

Yeah no, it definitely looks like some kind of odd bug. If you can, trigger it again, and report it via F12 in game.