I’ve had a few bugs since playing two days ago, two of which can be problem to the player. I didn’t know about the bug report tool in-game at the time, so I’m writing here. 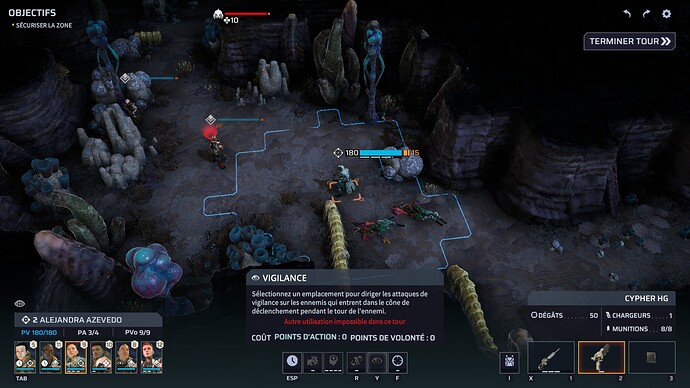 In red : “can’t use again this turn”. As I have written, I didn’t use it during that turn, and I had sufficient AP to use it.
It’s the second time this bug happened, but I can’t remember how it was the first time.

Do you know of the bug-report by pressing F10 it should be now?

AFAIK these have not been reported before.

Please report them via F10 next time it happens.

Are you running any mods at all by any chance?

I used the overwatch ability with my sniper, and was able to kill a pandorian this way. Two turns later, I wanted to use overwatch again with the same character, but the game wouldn’t let me.

F10 away the next time and hopefully the team can find a pattern and get it fixed for the next hotfix.

As I wrote, I learnt about the report tool afterward. When I read through the Steam forums actually. I will do accordingly next time, worry not.

I think you are right, I did shutdown the game after starting the mission, to do IRL stuff, and loaded it a bit after. I’m not running mods.

Also, not bug related this time, but the french translation of the assault rifle mastery is in fact…in german. The nerves !

This happened to me, but only after loading a saved game. Initially it worked and the anemy did not shoot the overwatch shoot, after loading the game he did.

It happened again, so I submitted a F10 ticket detailling the process.
The bug seems to happen ONLY for marksmen/snipers (whatever is the term in English), as every one of them is affected by the bug when it happens, and no other classes.

It must be the extreme focus skill (the LVL2 skill)…

So, this may help. I noticed it is not only an overwatch or skill bug. If you save and load the game, all the disabled members appear enabled again (This happens with all your soldiers, and human enemies at least). So if you lose an arm in battle, save the game, load it again, and you will be able to use your 2 hand weapons again… Hope they fix it, but I may actually miss this bug.

How this was not noticed before?

If you did not save the game when testing it, we may be having 2 different bugs at play. Test it, and if we are talking about the same thing, you should change the post.

Interesting.
The bugs related to overwatch that I encountered only seems to happen for the turn during which I loaded the game. It fix itself the following turn, but not I save and load once again in the same turn.

As for the arm related bug, I don’t remember well, but I may have loaded the game on the same turn indeed, as I sometimes play I short burst.

There are definitely bugs that are introduced by loading a save mid-mission. Another one is that some units can not go into OW (even with full AP) on the turn the load was used.