Having reached the long abandoned base, I thought I might record some of our ‘adventures’ along the way, especially since our commander has decided that whenever possible, we should conduct our tactical missions at night. He seems to think we hold a small advantage there. Let’s hope he is correct.

Against some out of control NJ soldiers. The team:

[One assault as well as the heavy have the Thief perk which should allow us to show some differences in the darkness of night. As well, the other assault has the increased perception range perk.]

While we could not see them, their body movements could be heard. 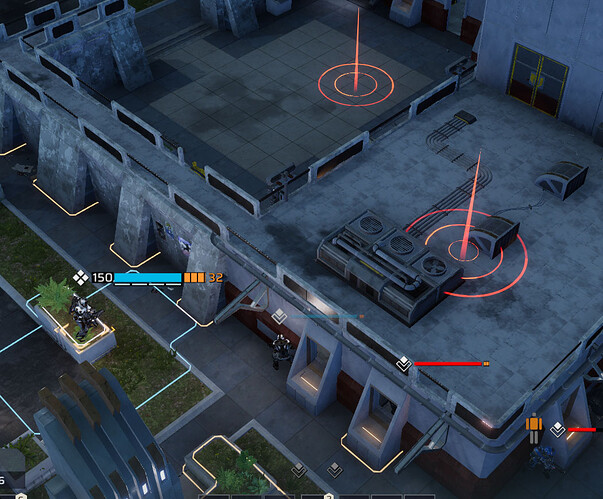 The mission proved safer at night, esp. against the NJ soldiers who seemed to all have Return Fire as a trained skill. Their range was actually manageable at night! 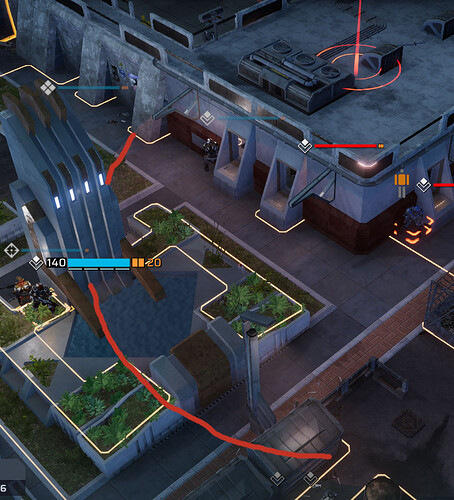 The usual crippling arms w sniper shots helped but the Anu priest at the end caused mass panic three times before we finally managed to gun him down.

A nice little night maneuver. While NJ could see as well as us, the reduced Return Fire made a tremendous difference.

[A bit more about sound. In the first image, two NJ operatives start in the front courtyard, near Phoenix start positions. One was indicated by the sound ping, one was unknown at NJ turn start. They both move through doors and windows, allowing Phoenix to follow their movements to the back of the map area, regardless of distance.] 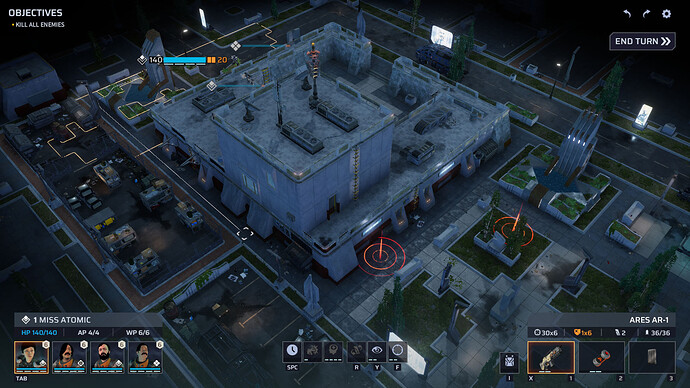 [On the next NJ turn, Phoenix still can follow the two blips at the back as they move a bit, but they both disappear at the end of the NJ turn. A new blip appears when a door is opened on the 2nd floor by a 3rd NJ operative.] 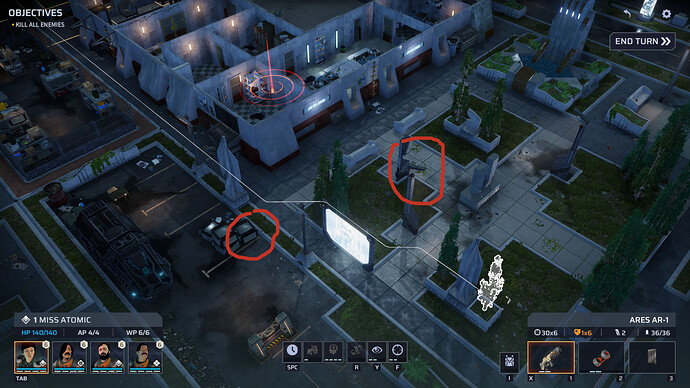 [So, if trying to sneak, don’t jump through that window! I think that NJ doesn’t know of my presence yet because I’ve not made and detectable sounds and no NJ operatives have come within 5 tiles of me.]

Jan. 01 The Second Mission: Scavenging In the Dark

Just a brief note. Since every Pandoran we encountered was of the melee type, and since as soon as our feet hit ground our rifles opened up on the Mist Sentinels, it mattered little about darkness or visibility. They knew where we were by the sound of our guns. We’ll have to adapt tactics if they ever learn how to use firearms. I wonder how much noise a club would make?

Symes Retreat Under the Stars

[Demonstration of variations in night perception.] 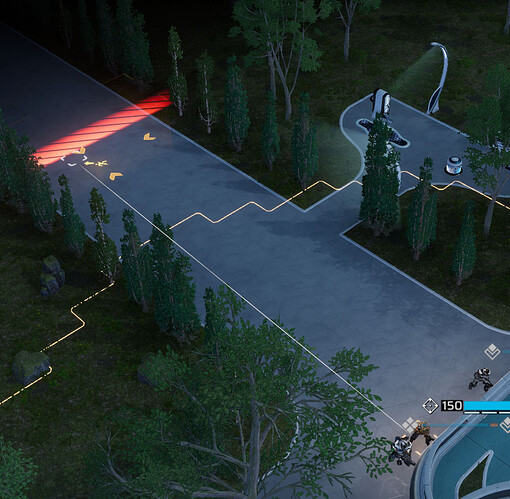 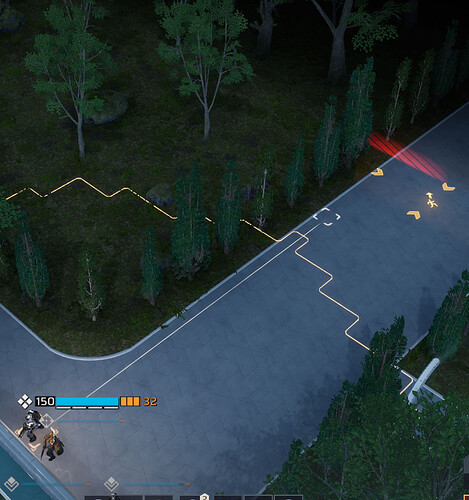 [The sniper moves first, trying to scout. Spots a triton.] 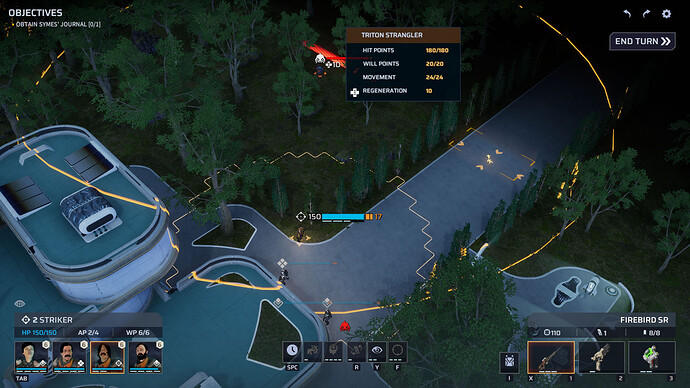 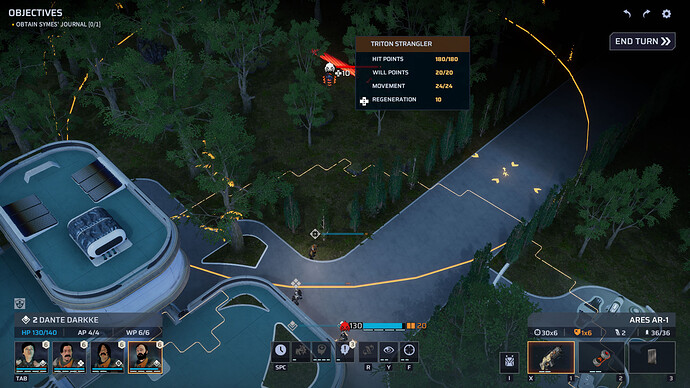 [Moving the other way, the sniper spots an arthron.] 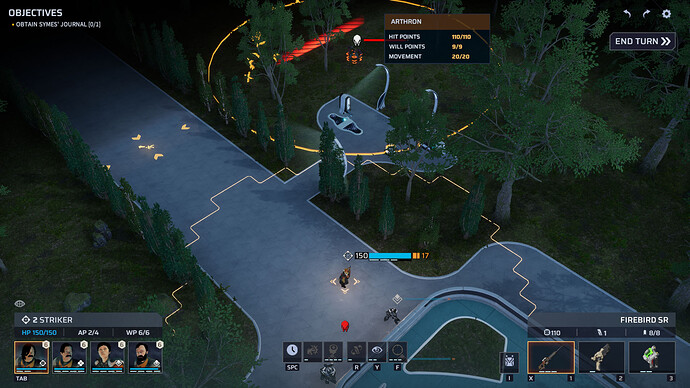 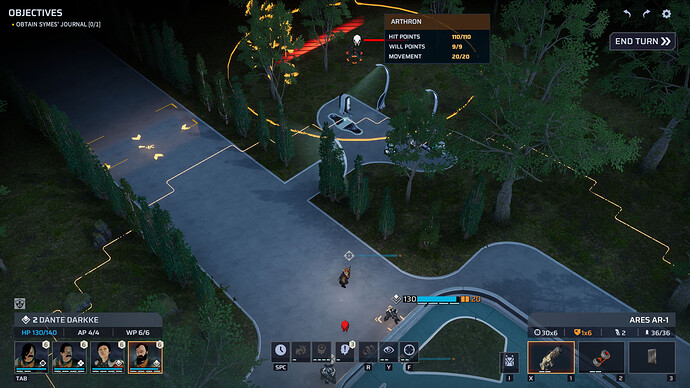 [Were the arthron to have machinegun capability with Return Fire, the assault could move just out of visibility and overwatch.]