We raid everybody + steal everything we need. Human survival is at stake and only the Phoenix Project knows how to end the Pandoran menace!

Inspired by etermes going over to the Dark Side and the fact that I have been playing Hypnos so long, always trying to keep factions up in diplomacy so that I get the research at +20%, and +30%, etc. But I do miss all those faction tactical battles and the human factions each offer unique combat challenges. I suspect many battles will be planned for night!

Jan. 01
We start in central Asia.
 First location found is an NJ haven with some crazed soldiers. A bit of luck, and an incredible shot by the heavy up through a hole in the ceiling at an NJ soldier up on the roof, turned the tide. Loot: 350 materials
 The 2nd location is NJ Fort Purity which we raid for materials; night time should help us. Atmospheric Analysis is not even completed yet! We luck out and 3 crates are near but 4 NJ operatives cover them. We nab one; our sniper takes a glorious shot through railings and takes out NJ sniper arm; heavy grabs second crate and we run for it! Minimal enemy fire mostly misses out derrieres! Four rookies acting like they are on some sort of sorority raid! Loot: only 5/15 but we bring home 500 materials + a med kit and a couple rifle clips [3 level ups]

Jan. 02
 3rd location NJ haven; raided for materials. It’s daylight and one of us is still in diapers, so The Wimp Patrol grabs two easy crates and runs for it. The heavy jumps over to the ‘far’ crate and everyone else grabs stuff from the 2nd. Sadly, one assault is STILL at level one afterwards. Loot: 6/18 only but 600 materials + 2 med kits and a couple clips [Now, if we had any tech to speak of, we’d build something!] 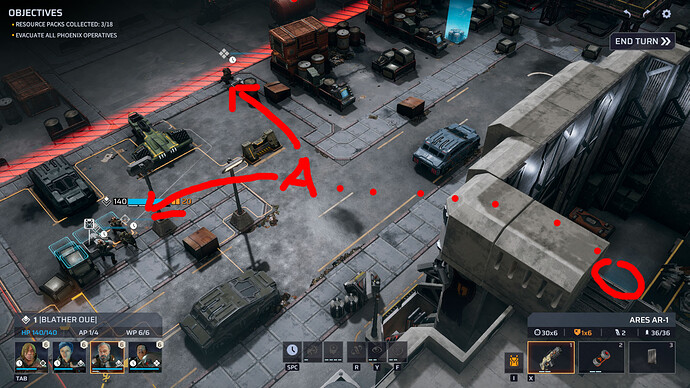 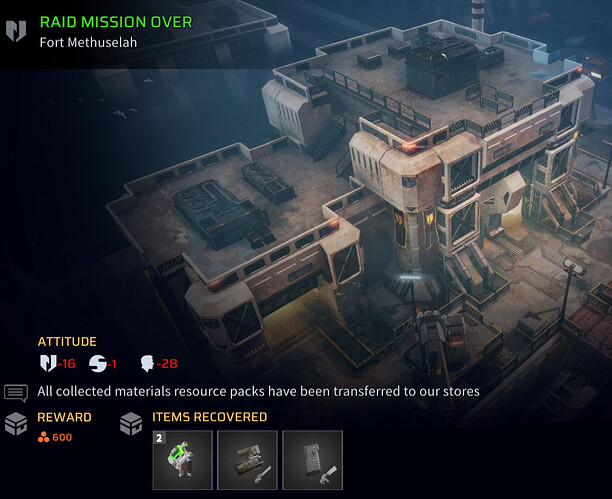 On route to the 4th location. 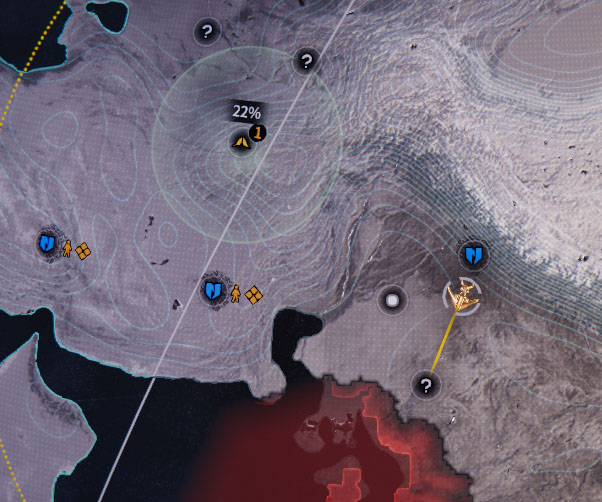 I’ve tried this once already, to end of January, and there are a couple tricky things to deal with. One: The only research you will get is what you steal, but research centers are few and far between! Two: Food can start to pile up; you have almost nowhere to trade it. [I say almost. IF there is a haven friendly to me (at this point, 2:19 a.m. on the second day, NJ is at -27% and hostile) I’ll trade with them while I can. I may be back later to take something else! (At this moment, the 1st haven is still on good terms since I helped them out so much.) But food tends to pile up. So we will take a page out of Evil Etermes’s Book and recruit into a haven with a training center or two, to draw on to replace casualties.

(More to Follow)
P.S.
That first ‘still friendly’ haven, with the heavy operative looks VERY tempting to nab before they learn just how evil we are. (P.S.S. That’s from the Blather Book of Evil; etermes wouldn’t be caught with his hand in a haven pocket!

Turns out that 4th location IS a Synedrion haven! We do the thief mission and claim 150 tech. That let’s us start construction of a 2nd Manticore. Still 8 hours away from Haven Trading Protocols and then we will research NJ + Syn and then the Archives. Hopefully then a 2nd base with a Fab.

Of course we only PRETEND to leave and we sneak back in for a food raid! If you have never raiding Synedrion for food, you are missing out on a gorgeous map and new tactical moves. There are so many levels to the buildings and not always easy ways in or out. And, in typical Syn fashion, everything is a window!

Our heavy jumps to the roof and drops down only to land beside a Syn sniper!. He takes the hit, survives, lets out a warcry, and 3 turns in, the sniper is dead. But it was an interesting surprise. The others head up that stairwell to the 2nd level and a crate. Eventually battling another sniper in the stairs. Two more wait outside as the Wimp Team runs for it with all of 4/13 crates of food and some odds and ends. But in truth, our 4 ops wouldn’t be able to carry too much more, so it’s not worth creeping in the buildings looking for one more crate. 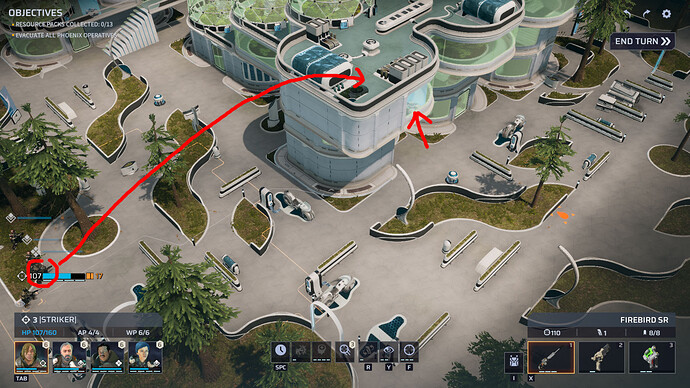 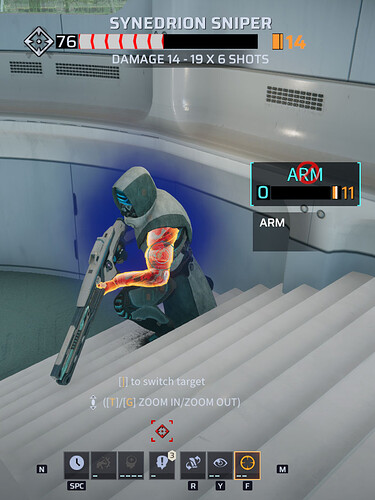 We come upon an Anu haven + help them with some worms. Even better than the food they give us, we notice a research center! Excellent! We will visit again but are in need of some rest and recuperation back at base before we can do that! It’s 07:00 Jan. 03. That’s 6 missions in just over two days. Interesting ones too. Different that sitting around waiting for a haven defence. Which is really the point here: Why not experience as many different tactical battles as possible? 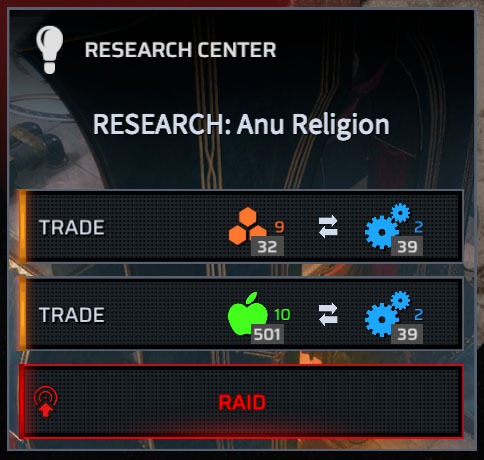 Second base established as well (China). Need a bit of rest after those 3 missions in a row.

Jan. 06 + 07 spent circling north-west-south of the base, exploring. Recovered an Aspida, 3 operatives about to be made in Pandoran snacks, a couple bases, and a scavenging site (still to do). It’s night so that will help.

Quick Update (School is back in-class tomorrow so greatly less time for this fun!

We spent up to the 9th exploring around the initial base, waiting for the 2nd Manticore. Then revisited the lone Anu haven with a research center. The dilemma is: Do I raid for Tech (in very short supply) or for research? It’s Anu Equipment so we steal the research. The assault armour is nice and those Anu shotguns have been terrible, causing havoc from far too many hexes away! You’d think they were laser guided! Now, with the two teams active, we’ll spend a couple days exploring. That Anu haven is researching Mutations, but without containment and and and, it won’t help in the short term. 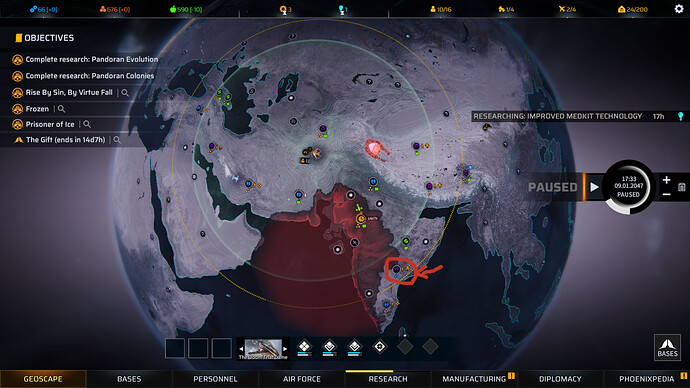 Nothing unique to report other than an observation: One nice change that raiding for research brings is you have to get TO locations, survive there two turns, and then get to an evac point. Usually, a Pandoran haven defence just means kinda moving here to there, blasting Pandorans as you go until their force breaks or you kill them all.

Getting TO the location depends on who you are facing. There is no way you can be out in lines of sight when facing Synedrion or NJ. The snipers will nail you. How do I get to the hack points without losing heads? A unique challenge. Against Anu, getting there is a bit easier but surviving…

So I have enjoyed that aspect. I just uncovered three Syn havens, all with research including infiltrator, Sentient AIs, and…(I forget the third one! Olde age!). We’re going for Sentient AIs to help speed up research. I’ve not seen the map before. Something like 7 hack stations are all in one large building on three different levels.