Is there a tech and item tree? Progression map?

I’m in my first campaign and even after several hours, I feel like I’m just stumbling across the map not really knowing what I’m doing. I randomly research this or that, build items, do missions. But I have no idea what this is all leading to. Most research does not even seem to do anything except showing me an info text.

I guess I’d find out about everything by just stumbling around for another 100 hours or so. But I generally prefer to play games in a way that I feel like I know what I’m doing. I wonder if there is some official or unofficial material showing us the progression of tech and items in the game?

In XCOM, you have conventional weapons, then you upgrade to magnetic weapons, gauss, then plasma. In PP, you also start with conventional, then get laser weapons from Synedrion, Gauss weapons from NJ, Virus weapons from Anu. Is this the progression? It feels more like variants so far.

The many different weapons add confusion but don’t seem to actually be so different. The differences that there are, are hard to utilize. Like if a weapon has higher armor piercing. But it appears that I’m meeting the same enemies in missions but sometimes they have a lot of armor and sometimes they don’t. While looking the same and having the same names. Not sure how I’m supposed to plan for that. Especially that there is nothing like the Shadow Chamber giving me hints what I’ll be facing in a mission, at least so far.

Even the basic info on a mission about the ‘threat level’. This level does not appear to have a consistent meaning. I’ve seen it being either low, medium or high from the very first missions, but some ‘high’ missions have been very easy, others extremely hard.

The tech and item tree really depends on the faction(s) you ally with.
New Jericho will go towards armor piercing and missiles, rockets, boom stuff.
Synedrion is more about stealth, accuracy & paralysis.
Anu is mutations, acid & virus.

Then PP can adapt some tech based on two factions (Gorgon Eye depends on Syn-LaserTech & NJ-Technician).
I’m currently working on the research tree and still missing the “rewards” part. It takes time because I want to make it automatic each time a patch comes out or DLCs.

I hope it will stay unnoficial. This would be strange if we were able to foreseen each next research on the research tree (how would you even know if there are some branches ahead?)

For me, not knowing what research is coming was part of the fun on my first play through. Firaxis XCOM was the same, you only know the tree once you’ve played it through (or looked it up online).

The faction versions of the assault rifle, sniper rifle and pistol are unequivocally better than the Phoenix Project ones but they’re not necessarily better than each other, just different. For instance, the Synedrion assault rifle is very accurate but is inferior to the New Jericho one against higher-armoured targets. Same goes for their sniper rifles.

You do get slightly ‘better’ weapons later on though.

As for the ambiguity in interpreting the threat levels, I think that’s intentional. You just don’t know what you’re going to face, because your scanners are only capable of giving you a rough estimate of numbers. This is part of the fun (for me, anyway).

And that’s exactly what the enemy intends. Their strategy is working!

One tip though: from mid-game onwards, if you plan for all enemies to have high armour you won’t go far wrong.

Yes but there should at least be categories or actual branches instead of the current completely unorganized list. It’s not like scientists researching antibiotics will suddenly end up with discoveries that lead them to building better batteries for laptops.

There was plan to allow players name their enemies based on discovered mutations. Like we see it wasn’t implemented, yet(?). I will surely address in mod this thing and more info about enemy threat on the mission.

There isn’t really a tree though more like a bunch of rocks. Pick up the rocks that interest you at the time.

As long as you’re completing items on the main objectives list you’re on the right track game wise.

There was plan to allow players name their enemies based on discovered mutations.

Oh gawd that’d be freakin’ awesome! I hope they do that.

In XCOM, you have conventional weapons, then you upgrade to magnetic weapons, gauss, then plasma. In PP, you also start with conventional, then get laser weapons from Synedrion, Gauss weapons from NJ, Virus weapons from Anu. Is this the progression? It feels more like variants so far.

Actually I like that part in PP. Weapons were always the pinnacle of human development. Basically laser rifle and gaus rifle are the best that human technology can produce. I see no valid reason why PP research should be able to produce some miracle weapons in short time. In UFO and X-Com we had aliens who were the catalyst for development and their weapons was reverse engineered. Here in PP we don’t have alien weapons to research and copy. Pandas carry human weapons. Only exception from this is virophage weapons.

It’s some soldiers upgrades but not much, at reverse it’s a lot of choices.

Here is a link to a text document containing the full research tree: https://1drv.ms/t/s!AtHhKpFtfXhYiTZYO8HSV9n8hRZR?e=bjrV93

The format is really RAW but hopefully understandable. I can generate this just by starting a new game, but to put it in a nice graph form is not part of my short term plan. So here you go.

Cool, with one graph per faction, I wonder what would make it more clear, there’s even “or”. Such logic requires constantly check all rules, even if it’s probably possible to reduce constantly the pool, it looks not much efficient, but neglectable with modern computer.

I haven’t tried it, but it seems that the factions can’t start their research before you do the research for their faction. I’ll try in my next game to do only the Anu research to see if NewJericho and Synedrion stay weak (no infiltrator, no tech, no Fury, …).
If they can’t research, they can’t trigger the events that impacts negatively inter-faction relations => no wars.

I haven’t tried it, but it seems that the factions can’t start their research before you do the research for their faction. I’ll try in my next game to do only the Anu research to see if NewJericho and Synedrion stay weak (no infiltrator, no tech, no Fury, …).

I doubt it, I had NJ blocked at 49 because of a bug, at least it didn’t stop elite, for drops it’s more ambiguous, looks like they can appear before the research is done.

No, what I meant is the research that is available once you find one of their havens (the one that triggers a cinematic for the faction once you complete it).
It seems to be a pre-requisite for their research tree, even for them.

It seems to be a per-requisite for their research tree, even for them.

I am currently working on a custom device/gfx/spreadsheet system that will provide comprehensive details about every Trees (PX+DA+NJ+SY) possible. With various gameplay facts (Storyline pathways, Indy Missions, rewards, bonus, etc) exposed as direct elements of the Techs flowchart.

Stay tuned.
Here’s some quick sample of the PX status… 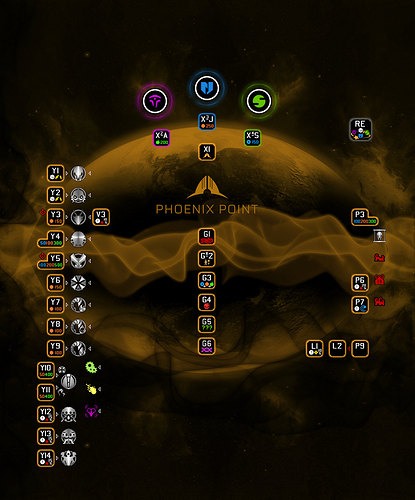 In fact… @Sheepy on the Discord #spoilers Channel has already created something worth minimal infos that i’ve often referred to when developping my own stuff.
Check out this early customized file… 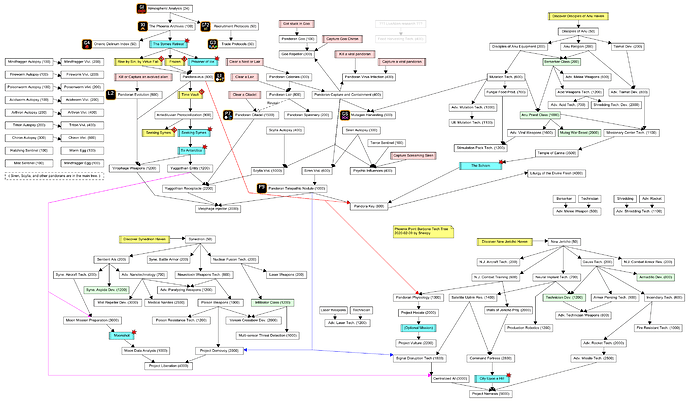 Well here is the graph then.
However, I’d like to make the generation of the graph automatic.

Well… i have to confirm that my XAJSI mod has been released on Nexus.

Get it from here ; https://www.nexusmods.com/phoenixpoint/mods/41/