Is height advantage a thing in PP?

In almost every game, standing at a higher elevation than your target provides some kind of advantage, and/or units firing at someone who has the height advantage suffer a penalty. Is this the case in PP?

I have the impression that it’s not. I’d expect that there’d be a bonus to accuracy and range, and a penalty when shooting at someone higher up, but I don’t see it.

Actually, going to a higher position appears to be a negative, because you give the enemy the opportunity to blow up the floor under the unit and make it fall down and take extra damage.

Also, the rails on the edges of buildings very often mess with your LoS when firing, especially for heavy weapons, while providing almost no cover.

It’s another thing that seems to punish tactical movement. I hope the game will be balanced so that moving a sniper to an elevated position really provides an advantage.

Actually, going to a higher position appears to be a negative, because you give the enemy the opportunity to blow up the floor under the unit and make it fall down and take extra damage.

That’s my experience too. If enemies have snipers half cover on the roof is a deadtrap.

Now, the biggest problem is that the half cover you usually have blows away with a single bullet and the following bullets touch. The floor breaking because of a grenade … I don’t know if real grenades can do that.

By going up, you see more and more see you, so snipers are a threat, but that’s true in real life too and has nothing to do with height advantage.

So I think that apart from the scenery high destructibility, high ground has the real benefits and drawbacks.

Actually, high ground in this game gives you the real bonus that every other game only simulates.

I think the real advantage of high ground in real life is it making prone position vulnerable for those at low ground. There is no point to lie down next to a building if there is a sniper right above you!
However we don’t have prone position in Phoenix Point, sigh. I remember using it a lot in X-Com: Apocalypse))

Is it? Let me phrase it this way:

Now watch if you have any advantage over these bersekrers, mutogs and losers with pistols

Now, the biggest problem is that the half cover you usually have blows away with a single bullet and the following bullets touch. The floor breaking because of a grenade … I don’t know if real grenades can do that.

As others have said, yes but not in the way you mean it. There is no arbitrary bonus to hit/penalty to hit.

The primary issue with elevation in PP however is the inability of soldiers to lean over the blasted railing. Railing screws up LOS as a result. Also the inability to kneel or lie down to lower the sniper’s profile negates some benefit of higher elevation.

An other bad thing when in high elevation is that if an Arthron grenades you, you go through the floor.
The big problem about this, is that if there is no free tile on the floor below, you just die.
Fall on the floor ? You lose a bit of health for the fall.
Fall on a table or a chair ? You die. Even if you were at full health with 300 HP in Anvil-2 armor.

This is one of the cases where I hit the “restart button” for a mission (an other one being dying at the end of a jet jump - hasn’t happened in a while now - maybe corrected in a patch).

the only thing I use roofs for, is for jumping up with a jetpack, and then lauching mounted rockets and using grenade launchers.

you can sit in the middle of the roof, not needing LOS, in perfect safety, and constantly launch rockets and grenades from it. then just jump to a different roof if you need to reposition.

but yeah, in this game roofs make absolutely terrible sniper locations. far worse than being on ground level, which is indeed different than any other turn-based tactical strategy that I have ever seen. you are basically just making yourself an easy target with little to no advantage to your offense.

Why is having the high ground an advantage? Do bullets go faster downwards?

Just because it is in other games doesn’t make it realistic and this isn’t simulating a medieval battle.

They may not move faster, but one has a better control of the “drop” of the bullet path when shooting from high ground. On the same surface as the target, one has to adjust the elevation based on distance of the target. High ground affects that adjustment and should make for more accurate targeting. The opposite should apply to shooting from low ground at a target on high ground.

difference is not signifcant to implement it in the game.

Using a bullet calculator there is no discernible difference in point of aim from aiming at +45 deg to -45 degree at 300m, a distance longer than anything represented in game, using 5.56.

At the same distance, the round would be going approximately 0.6% faster aiming down.

technically, yes, the bullet goes faster. not significantly, but gravity is gonna help it a tiny tiny bit.

ANGLES is the point. the idea of being on high ground as an advantage is that you have better angles to shoot down through cover, and it makes you harder to hit because you can lie prone on the edge. but of course, cover has no angles in this game, and you can’t lie prone so… yeah, I think it is something they can and should add to the game. the ability to defeat cover by angle of attack, and being able to manually change your stance.

I am still a bit fresh to PP (as if didnt play it much) but shouldn’t it work just fine, with giving attack from above superior protection and better attack angle?

Standing on the roof without a cover isn’t particularly smart thing to do.

I do hear, that one would be likely to lie down on the roof to minimize exposure and shoot that way. Perhaps even is “low/high” stance was manual rather then automatic it might make open rooftops more desirable as well.

You can’t lie prone on the edge of a building a fire down, even assuming it has a perfectly flat roof with no wall around the edge. What would that even look like lol? Are you hanging your elbows over the edge?

This picture is correct and is already pretty much simulated by the game. This is the sole benefit you would get in terms of aiming from having the high ground (at least in terms of the ranges we are talking about in the game), but assumes you have some cover. It would be better in PP if the game let you raise your weapon higher when next to low cover (something that Gears Tactics does with heavy weapons).

Edit: I should add in real life you would not want to do what is shown in the picture. You would not want to put your faith in a narrow wall of bricks protecting your lower body, which may be penetrated by 5.56 and above. Plus it would be very obvious to the enemy where you are. Really, you would stand several feet back into the room.

Really, you would stand several feet back into the room.

Which is what experienced PP players do. It’s the same as standing 1 or 2 squares back from the edge of a wall, to take advantage of the full cover.

Then you step up to the edge in your turn, take your shot, then step back again.

The key ‘problem’ with PP’s simulation is that because heavy weapons fire from the hip, they are severely restricted on higher elevations, which blocks their line of fire. Ultimately one hopes that the devs will figure out a way of giving you a ‘roof stance’ that allows you to rest the HMG on the ledge, but at the moment they have many more fish than this to fry.

No I real life you would not go near a window to fire out, at least not in an environment that is not secure. You would stand back from the window and fire from that point. A guy leaning out a window would be spotted instantly.

This picture from American Sniper shows what I mean: 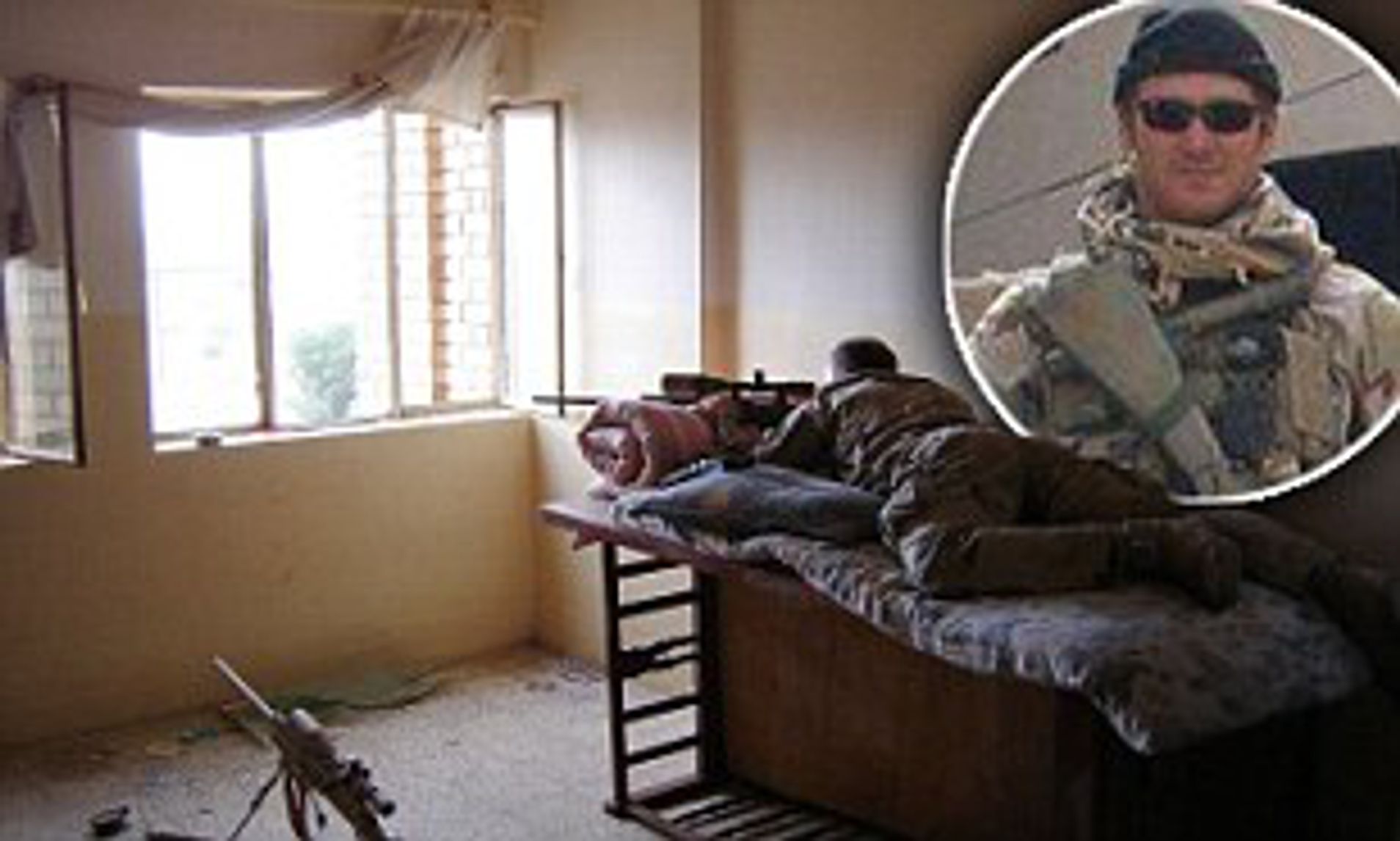 a picture which shows the sniper taking advantage of high position, by lying prone and letting the wall in front of him block LOS from lower angles.

exactly what I said.