Hi, I made two saves during a mission and I cannot load either one of those. 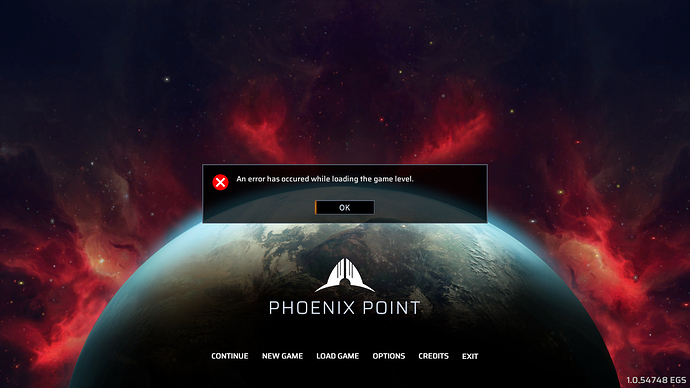 Nothing you can do unfortunately. Just load the autosave before the mission and try to do the mission without saving

Hmm I loaded the game in Geoscape and started the mission again and seems it is not working. It has been loading for over 5 minutes and nothing.

In case you didn’t, clean by computer restart. Check your drive sanity. Check game files integrity, I think Epic has one like Steam.

at least for now

I’m willing to bet the mission was a Haven defence with a Scyllia?

Hello, On both occasions, the save file corruption (unable to load, and I get an error message) happened immediately after the death of a Scylla due to bleeding - this seems to be a very specific condition. After a bleed death, I can continue playing, but anytime I save, it will be unloadable. I’ve killed a Scylla in another mission by blasting it to death, and my save wasn’t corrupted. So it seems there is a bug which corrupts the save file after a bleed death.

The update has just downloaded and updated the game but now when I try to continue my game it hangs on the loading screen. Both the autosave and the 2 manual saves I have experience this. It is like the save loads and the background sounds change to the level but the screen stays on the loading graphic. Anyone else experience this or can suggest a fix?

I was in mission of def Syn base from Pandas, but at the end of battle I decided to load five minutes ago save and… the end… I can’t load save in battle - it gives an error of loading… I can’t start this mission from map - endless loader… I don’t want to skip this mission… Guys, can you do the game without unplayable bugs?

As the title of the thread says, some of the haven defences are bugged so that if you save you can’t load that save: you just get an error message and get back to the main menu. Also trying to load such save makes it so that if you try to load any other save after that, the game just stucks on loading screen. Only way to load another save is to close the game and try again, this time not loading the broken save. I have sent couple of bug reports of these. At first I thought that the fault is in…

the same bug has been reported a few times in here over the last few days.

The scylla was also present in my corrupt save, but I shot it to death with a turret. Though it was bleeding at the time.

It was also an Anu haven defence.

Similar situation here, during a haven defence, every save before the scylla death will work, but when I try to save after its death, that save gets “corrupted”. Also trying to load a good save game after I got the save game error message will freeze the loading screen.

I had a variation, end of mission, screen without UI, perhaps a Mutog dead. Interestingly the autosave right after mission reproduce the no UI bug. Otherwise haven’t get yet broken saves.

GREAT! Worked for me too!!! Can load if i First destroy the specific Part on the scylla. When no mindfragger appears if you Kill a scylla then savegame load is possible.

Just take a look, works for me. Perhaps it helps you also.