Hey, so I’ve finished the game twice; first with Synedrion ending and second with Phoenix ending. After defeating the last boss and using a certain item by activating the objective tile, the cutscene plays. After the cutscene, a defeat screen comes up saying Pandorans colonized the world. 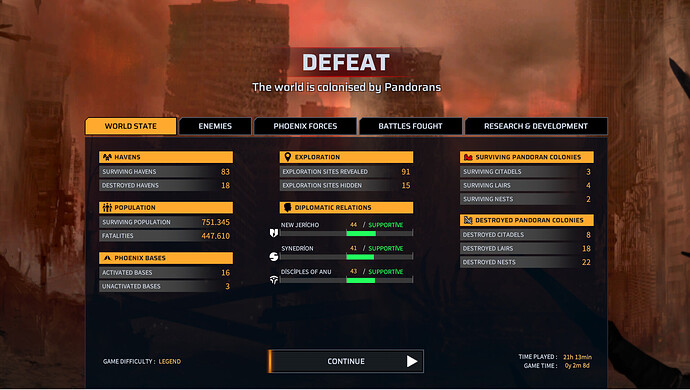 I wonder if this is the intended result?

I’m playing the Steam Year one edition; same happened to my GF who played the same edition.

Sounds like a bug to me - I’ll pass it on in the Council.
If it happens to you again, please f10 so that the devs can see the game state that triggered it.

is it PX project Ending?

I have completed NJ and PX , both are victories

I already went and reported through F10 but wanted to check the forums, since nothing similar existed thought might as well create a topic myself.

I’ve completed both PX and Synedrion endings, both resulted in this. I mean, it’s just the ending screen it does not affect the gameplay at all but it’s something to know.

That is the way, I have reported a lot of bugs during this year.

I think I will complete the other 3 endings next year, I will check in case I see something like your “defeat” final report