when i start the game, there is a message that tells that there is a conflict between the cloud archive and the local archive. any ideas to solve it?

i had the same problem, cloud synchronisation seems not to be done autocamitaclly you have to force it when you quit the game and got back to Epic Launcher so in the end i deactivated it because i was tired of the synchro question popup…

Yes seems to be a big issue actually and it don’t matter which one you use my game still does not function correctly after! At first it did not do this choice 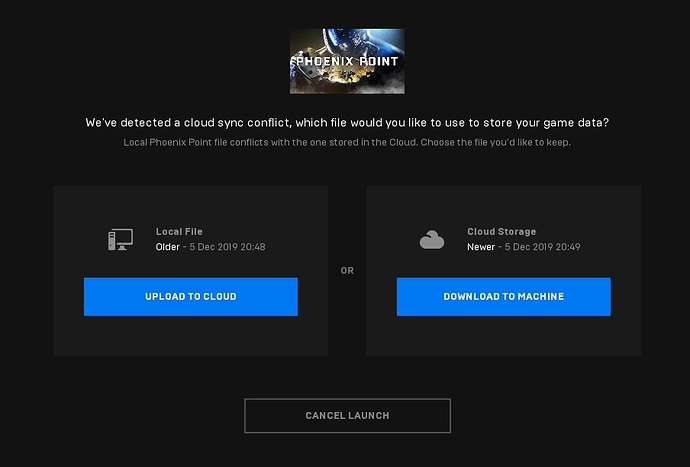 Error904×613 49.2 KB
but has just started and the game worked fine for a while. However, there are so many bugs happening right now it is unplayable… Should have been another backer build… I can live with the BB being buggy but it really irritates me when its is the “official” release! May need to put this aside for a year or so till it is sorted. PLUS… There were many major bugs I reported with the F12 in the BB but they are still here, seems they don’t really look at all of them?
1 Like
Papagizmet December 8, 2019, 9:22pm #4

I have the same issue, but I did notice one thing. I had no issue until I downloaded two DLCs for the game, I think they are music files or something. Once I did that I started having this issue, up till then I had no problem.

My solution: Epic -> Library -> click on 3 dots next to Phoenix Point -> turn Enable Cloud Save off.
Honestly I see no reason other than playing on two separate PCs to have this on. Yep, indeed, it doesn’t fix the problem, but searched a bit and a lot of people recall same problems in other games on Epic. Thus it won’t be rather fixed fast.