Hope my English is good enough…

I play the game (release Version) in Borderless Window Mode, but every Time when i click in another monitor for google or something else The Game moves to the TaskBar and the Desktop shows up… but i want that the Screen remains in the game an not at the taskbar…

I’m with you here - I also think it’s a bug, pretty irritating one to be honest.
The borderless mode is designed this way, so you can indeed switch and do something on your second screen while waiting for loading to complete or pandas to finally move around the map. Funny thing is that it doesn’t always minimize itself - try to click on other screen when the loading screen appears and the game won’t minimize. But after few seconds, if you click another time, then it will, so it’s something strange happening here.

Yeah it wasn’t like that in Backers Builds. It was changed in full version. I hope they will revert this change.

Yeah this is annoying and should be a simple fix for them.

Indeed in that it’s very annoying for multi-monitor setups. I notice that certain things like cutscene videos, loading screens and such are fine. It’s only when in the Geoscope and Tactical combat that the game always minimises when another window becomes active.

Been a while since I fiddled with Unity but back when I did it was a simple PlayerSettings variable called ‘Visible in Background’ or similar that needed to be toggled within the Unity Editor before compiling a build.

There is a simple temporary fix:

You can now play in borderless, and it will stay visible when you switch to the other monitor.

The epic launcher doesn’t allow you to provide options to the game (as far as I could see) – if Phoenix Point taught me one thing, it is how crappy the Epic Launcher is --, and the shortcut it creates doesn’t allow that either. Nor can you jump to the install location through the Epic Launcher, so you have to find that location yourself on the Explorer, create a shortcut from the application, and add the option to it. That kind of pushes this solution out of the “simple” category in my opinion, but thank you for pointing it out!

However, you can open Steam, go to the “Games” menu on top, and select “Add Non-Steam Game to my Library”, and you can set the “-popupwindow” launch option from the game settings in Steam.

But for this to work properly you need to move your saves to a different location, and Epic cloud saves won’t work.

Epic saves location (with a “random” name for that last folder that will be different for you):

Wait… if I launch the application through a shortcut like I mentioned, it doesn’t save to the same place as if I launched it through the epic launcher??? What’s the CLI parameter to change save location, then?

I don’t think there is such a thing.

However, you could make a “hard link” of one folder to the other, so that they point to the same content (meaning they are always synchronized), look up online how to do that, backup your saves first.

Here you can add a command to the start of an Epic Game : 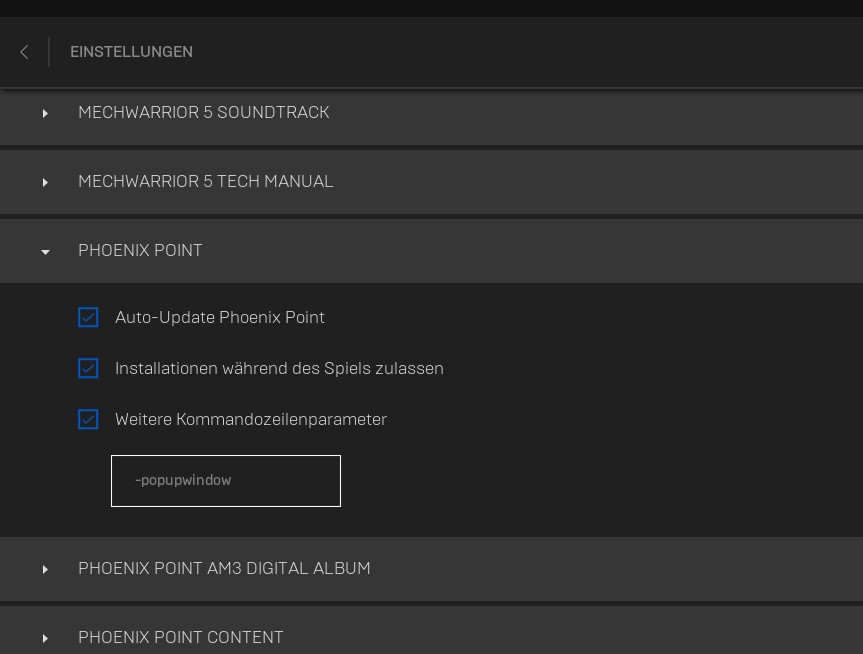 so under Settings in EGS when you scroll down.