All is in the title. Don’t know if it is a normal behavior but, as I chose “close quarters specialist” since I lost my mace on my berseker, I found it strange not to be able to equip an iconoclast on it. It just says “not proficient”, in complete contradiction with the skill description (see images).
Any information on that?

As a new user, I can’t post 2 images in one topic, so I put the second one here: 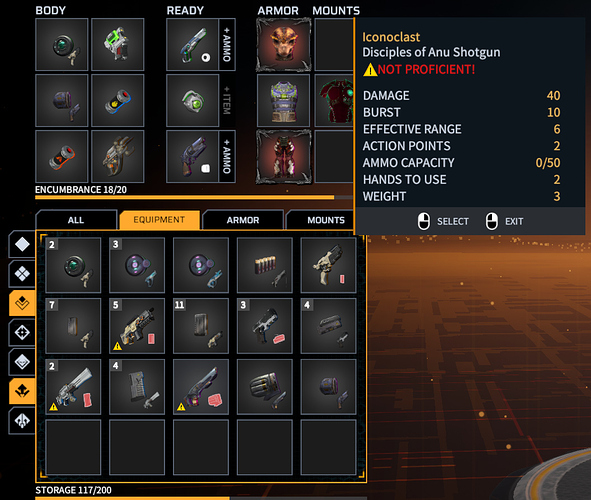 The rocket launcher “Fury-2” is not attachable to a soldier with heavy as secondary.
I think for the same reason. If this is the case, it’s not only a visual bug.

No, with heavy torso it works (but the misleading triangle symbol is still there).
Thanks.

Is somewhere a hind that you need a heavy torso for this kind of attachments ?

Mounted weapons require a mounting point, which are only found on heavy torso armor.

The UI looks horrible. Can’t they outsource it to make it look like the icons are not these placeholder ugly icons if they can’t design stuff themselves?