[Backer Build 5] The character loadout screen could use streamlining

Hi, I will say that the UI generally serves its purpose well and it’s been improved quite considerably since previous builds, kudos! However, I think that the UX could still be improved, with my most notable gripe being the character loadout screen. It’s uncomfortable to go through with the placement of the buttons and the size of them. Here and there the buttons are small versus a very big font. It kind of hurts my eyes. I think it’s redundant to divide leveling and stats from the loadout menu.

Here’s a Frankensteined example of what I think would be an improvement. 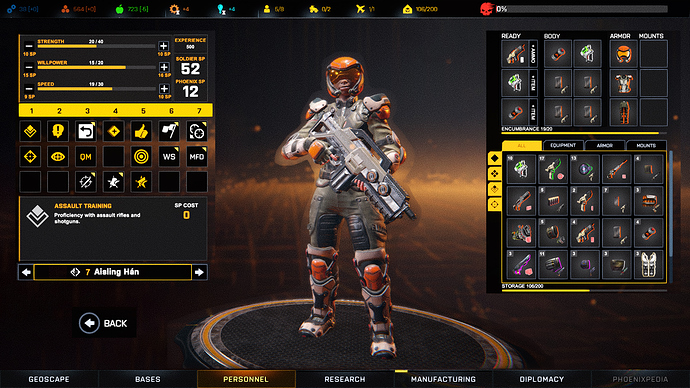 Agreed, looks cool that way. No need to switch between “training” and “equipment” tabs.

You have my vote. Same thing should be during mission where you could easily check soldier abilites, mutations, armor attachements etc.

Much better, I would also transfer the soldier switcher panel somewhere to the top

My vote as well to you, sir.

+1 though I don’t know why you need to see the character at all, given that they all look the same as each other.

I don’t know why you need to see the character at all, given that they all look the same as each other.

But they won’t look the same in december release.

Other than that I suppose that even when they look similarly you still can see at glance what kind of soldier is that and re-supply him accordingly.

Other than that I suppose that even when they look similarly you still can see at glance what kind of soldier is that and re-supply him accordingly.

You could see that with a small portrait though, or even a label saying ‘Heavy’ or whatever.

Fair play, if there’s going to be more customisations upon full release though.

It establishes a somewhat personal connection (and of course, this varies per person) and removing it would just reduce the troops to stats and numbers. With or without customization, getting rid of that would add nothing to the game.

I have to agree, that swapping between the abilities and inventory is pretty annoying.
Otherwise, I love the menus themselves. They remind me alot of shadowrun returns, which was one of the subtle things i appreciated alot in that game!

They remind me alot of shadowrun returns, which was one of the subtle things i appreciated alot in that game!

Now that I think about it, it really is more convenient to have stats and equipment on one screen. I’mma pass this on to folks on Discord ;o

you got my vote really nice GUI

While we’re on the topic, there are a few small features that I feel would be fairly easy to implement, and while unimportant, they would be fun.
1: Bios / longer names
Some text field for backstories and a ‘real name’ entry would contribute absolutely nothing to gameplay, but a lot of people would probably enjoy it anyway. People like that sort of roleplay element.
2: Customisable appearances
Twitch streamers and the like are going to want to name troops after their audience, and regular players are going to want to put themselves and their friends in the game. Giving players control over the appearance and gender of troops, or at least the appearance and gender of new recruits, would make this a lot easier and more comfortable.
3: Medkit button
Troops can use medkits in combat to restore their HP, but they currently can’t do this out of combat. A ‘medkit button’ in the soldier loadout menu would remove the current weirdness of putting off victory while everyone whips out medkits for some last-minute triage that absolutely cannot happen 5 seconds later.

This is pretty good. It would also need to show where soldiers are deployed. That will be critical information when you are worldwide and running multiple teams.
What about mutations?

Currently, healing from medkits is not persistent, meaning that even if you heal a 145 hp soldier back to 200 before the end, by next fight it gets reset to 145 anyway.

Was that in a patch? Because for me, the healing was always permanent