What happened to the Scylla with the human face - not in the game? We need that horror vibe back

So one of the best selling points for Phoenix point was the horrifying Scylla monster with the woman’s face.

Like that battle was dark and terrifying and it made me want to play.

What happened to that? She doesn’t seem to be in the game and the new Scyllas are so much less cool.

It’s like they walked back the cool human/monster elements when they should have dialed them up.

I was so eager to fight that and now I’m just a little let down. Great game… it’s just so much more generic without that stuff.

Like it would be so much cooler to see human elements in all the enemies.

I wish they’d dial the horror and atmosphere back up.

Don’t get me wrong I love the game but… man, that pre-alpha gameplay and the pandorans they had before are truly amazing. What happened to that level of character?

Totally agree, that’s why I backed the game too. Game is great but now my rule34 art is less accurate

selling points for Phoenix point was the horrifying Scylla monster with the woman’s face.

It was just character in the menu. She wasn’t anywhere in the game to be met. And I’m not sure what you mean by

that pre-alpha gameplay and the pandorans they had before are truly amazing.

Enemies are still the same as in pre-alpha. Unless you talk about concept art pictures - then well they never made into the game. Thus they never were truly amazing.

Dude you need to watch the pre-alpha boss fight against her.

She was in the game, and the level she was in with the tendrils everywhere was amazing.

They totally changed the pandorans, there was a much bigger horror vibe originally.

Here’s Julian’s video on fighting her and she was amazing. Can’t imagine why they’d replace something so iconic with something as generic as the new scyllas. 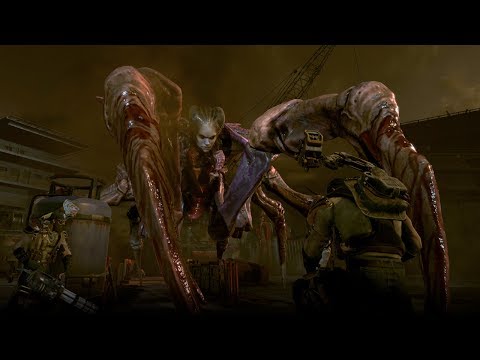 This and Fort Freiheit map, and first trailer were just promotional elements. They were not planned to be in game.

They should be. I dig Phoenix point but stuff like this would take it from great to amazing.

The scyllas we have are just unimpressive.

And of course they were planned to be in the game, it’s not like they created something entirely against what it was meant to be to sell the product. They were showcasing the build they had of Phoenix point.

Just not sure why they backed down from something so amazing in favour of the more generic less horrifying scyllas we got.

Unfortunately, a mediocre generic game that targets a wide audience will still have better sales than a great game that targets a niche. Snapshot was quick to walk back on the body horror elements that they used to secure public funding. The “finished” game differs greatly from that which they touted during the Fig campaign in many ways.

It is clear that their design philosophy was numbers-led.

Or hampered by trying to actually code the original vision and get a product out the door.

(…) it’s not like they created something entirely against what it was meant to be to sell the product.

Yeah, but they did. And it was a dickmove magnitude bigger than anything else (even including the hate over Epic timed exclusiveness).

For me Fort Freiheit was better game than PP is.

I really dig Phoenix point and I have faith in what Julian is doing, and hopefully that’s where it ends up. If not in the original than in the sequel.

I just don’t know why they removed her, maybe the censors thought the original designs were too much or something but they ARE what made Phoenix Point such a draw.

And I don’t think great enemy design leads to reduced sales. It’s just a really puzzling change is all.

The scyllas we have are just unimpressive.

If you talk about visuals, then it is probably for rating. With more human-like enemies younger audience would be outside of allowed customers (not that it should matter… but who knows).

If you talk about how they behave and how big danger they pose, it is all case of bad balance. Player has too many toys to make Scylla easy bug to squeeze. In early builds, soldiers had not all these fancy skills (which big pool of audience love).

And of course they were planned to be in the game,

If we talk about maps then for sure not. These few in early builds were just hand-crafted to draw the audience.

But game for the whole time was meant to have procedural generated maps - which can’t have too much of a mood when there are many pieces assembled together.

With hand-crafted maps they could make great lights, great shaders, great props all over the map. But that was not meant to be in game. Some objects were transferred to the final pool of elements creating the map, but not those who made that specific horror theme.

It’ll never be as good as it could be without the horror vibe.

And I’m definitely talking about the visuals.

Nothing in the game is as cool as she is.

I agree. But unfortunately game was not planned to be like that… Or even if it was then it was quickly abandoned. Second map which was showcased had Scylla already similar to current ones.

This is the feedback section. I’m giving them this feedback.

I dig Phoenix point but there’s things like this, that would make to go from good to spectacular. And hopefully they’re listening.

Maybe for second game in universe.

For me Fort Freiheit was better game than PP is.

Yes, unfortunately handcrafted, scripted nature of FF probably sold better the fiction then the final game. From what I understand soldier skills weren’t in the game yet at that point, so major balance issues didn’t pop up yet.

PP didn’t live up to the pitch in quite a few ways. It is what it is.

I mean I hope they’ll continue to develop into year 2.

But wow, the pre-alpha arthrons with the human faces were so much creepier.

They need to bring that style back a little more. Fog, atmospheric noises, that’s what would elevate PP to one of the best in the genre.

It is too late for that. Game is almost at the end of development cycle, and going back to models and animations scrapped at the start of that cycle would be dead end.

I would prefer them to focus on their next game and then come back to Phoenix Point 2 with proper approach.

The next game will be a long long way off, and I’ve seen some games go from okay to great after their initial release.

Sounds like you hate the horror vibe but I think a lot of people don’t.

And it’s not done the development cycle, dlc is still coming.

Look I would prefer horror vibe above what we have now. But:

Of course there is small chance for that but it would probably require sacrificing part of the team, which is no longer needed for next projects, to go back to old project and make there some fancy adjustments which were not planned.