I though, whilst awaiting Cthulhu, I’d maybe do a bit of a highlight on how to fund the effort to destroy the Pandoran menace.

I can recruit easily enough from havens, the odd event, and now, at my own bases. So finding recruits isn’t a problem. Having enough food (Legend) is a bit trickier.

I have enough types of weapons and gain more either by having factions support me with their research (willingly or otherwise) or reverse researching them from examples recovered from encounters (or brought to us by armed recruits). Building the weapons is a bit trickier not only because of resources needed but also because of fabrication needs.

There are 4 types of flying ships available from havens (willingly or otherwise) or built by Phoenix methods and they come in various flavours to suit just about every need and/or play style. Actually building them is a bit trickier not only because of resources but also because of fabrication needs.

So it seems, from many campaigns, that the main ‘stumbling block’ (if you want to call it that) is funding. Specifically, having enough resources to recruit/build and along with that goes having enough fabrication facilities so that build times are not incredibly long. I can have a 2nd team recruited (Legend) in about 6-8 days, and I could even provide them with a ship (courtesy of an unwilling haven leader). But I can’t equip them. It takes days to build armour and weapons.

So, a look at dealing with those two concerns. Any comments/suggestions/condemnations along the way are greatly appreciated.

I usually just scan at Phoenix Point first, but flew down to the site since, with a bit of luck, the scan will cover the entire subcontinent (and hopefully reveal something over there on the eastern horn). 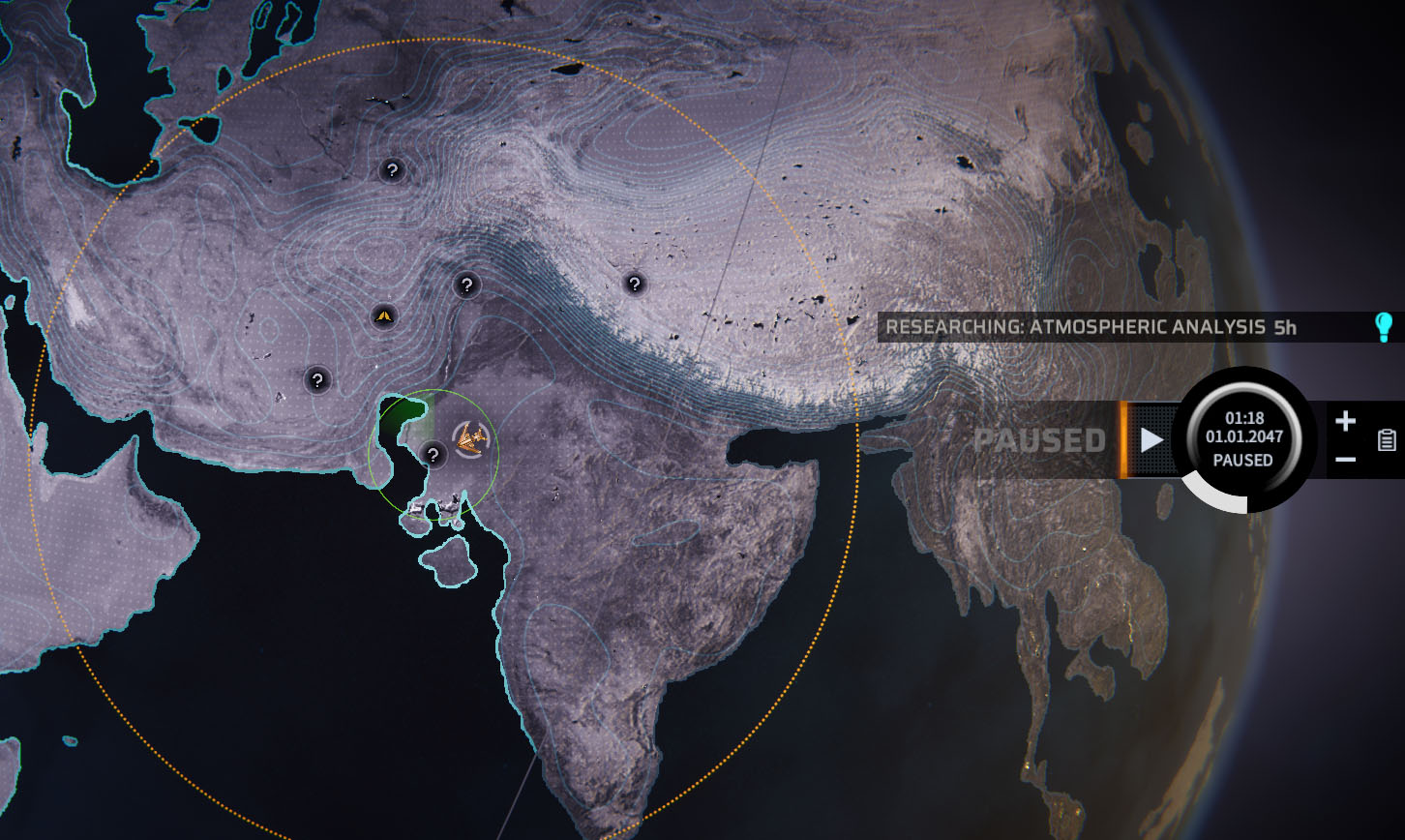 Starting resources (Legend) give you enough to feed your operatives and craft some ammo supplies, medkits, and the ever essential grenades. Beyond that, not much will be happening. No building of facilities in the base.

So, we start to explore.

The first exploration site reveals a scavenging for resources. Excellent! Just what everyone wants to do with newbie rookies. 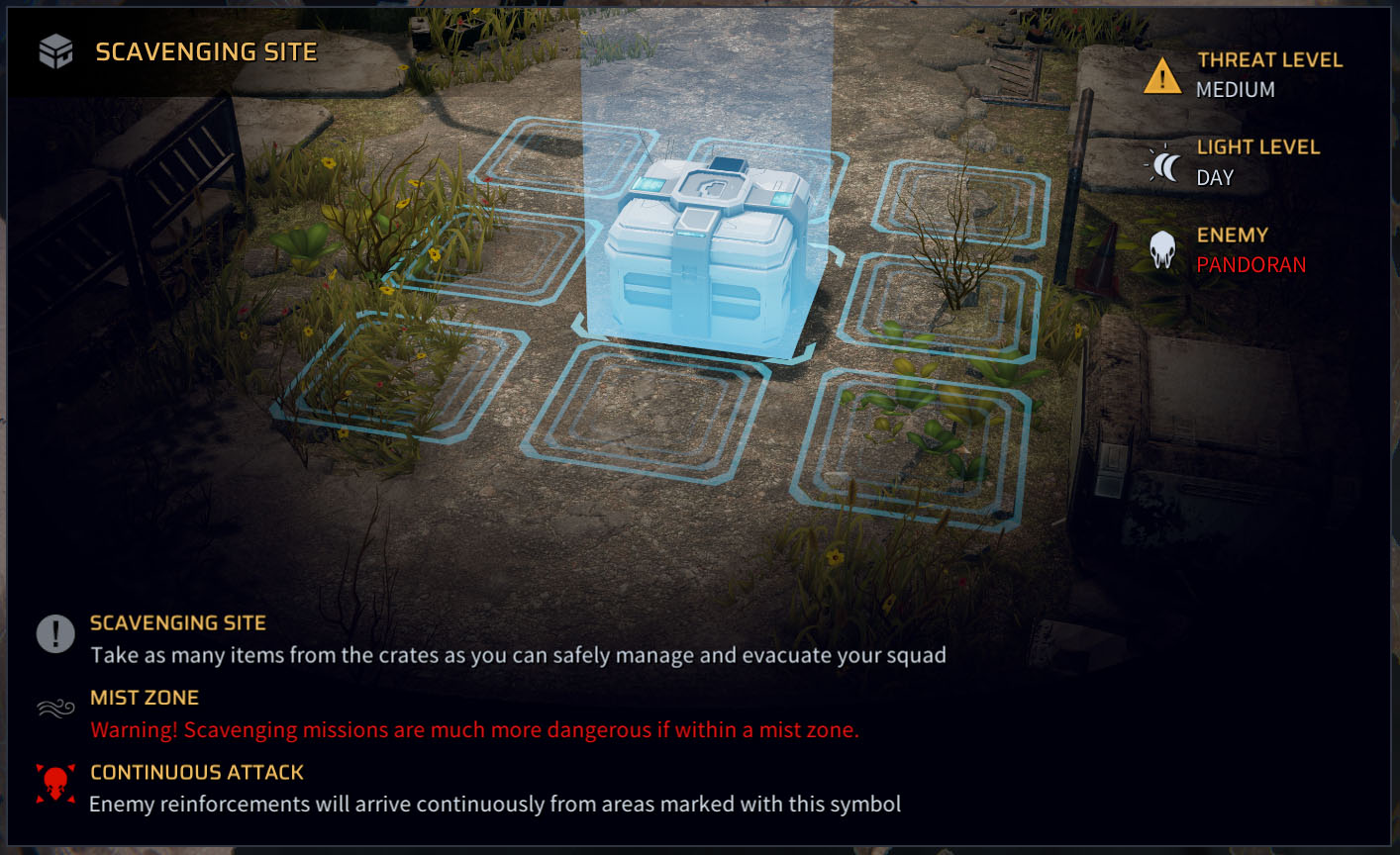 With the change to these, just how difficult they are depends on who you meet. At the moment, only Pandorans come in an endless stream, so that makes them the worst to face, esp. early on when you can barely hold a rifle straight and the accuracy of that heavy cannon just astounds the world!

Keep in mind you want to pick up as much stuff as possible (forgetting about carrying strength). Make sure you leave lots of room in that backpack!

Everyone goes on grab and carry duty!

This particular map doesn’t exactly look easy. I’ll go for the 3 marked crates but all that open ground doesn’t feel particularly healthy. I think, if I can actually get up to that third crate, I may call the operation at that point (although it will depend on Pandoran types partly). That’s an awful lot of open ground to cover for those other crates, esp. on our first mission. 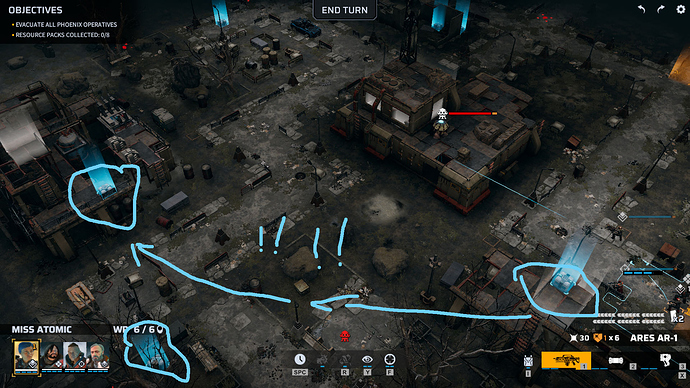 If facing Forsaken or Pure or bandits, you have more of a luxury of going around after you have eliminated them all and picking and choosing from all the crates.

[I’m assuming, even though we have not revealed the Mist yet, that we’ve actually landed in an area of Mist (see message on load screen). Never had that happen before! Great! Let’s see if we can make it to 3 crates without getting heads blown off.] 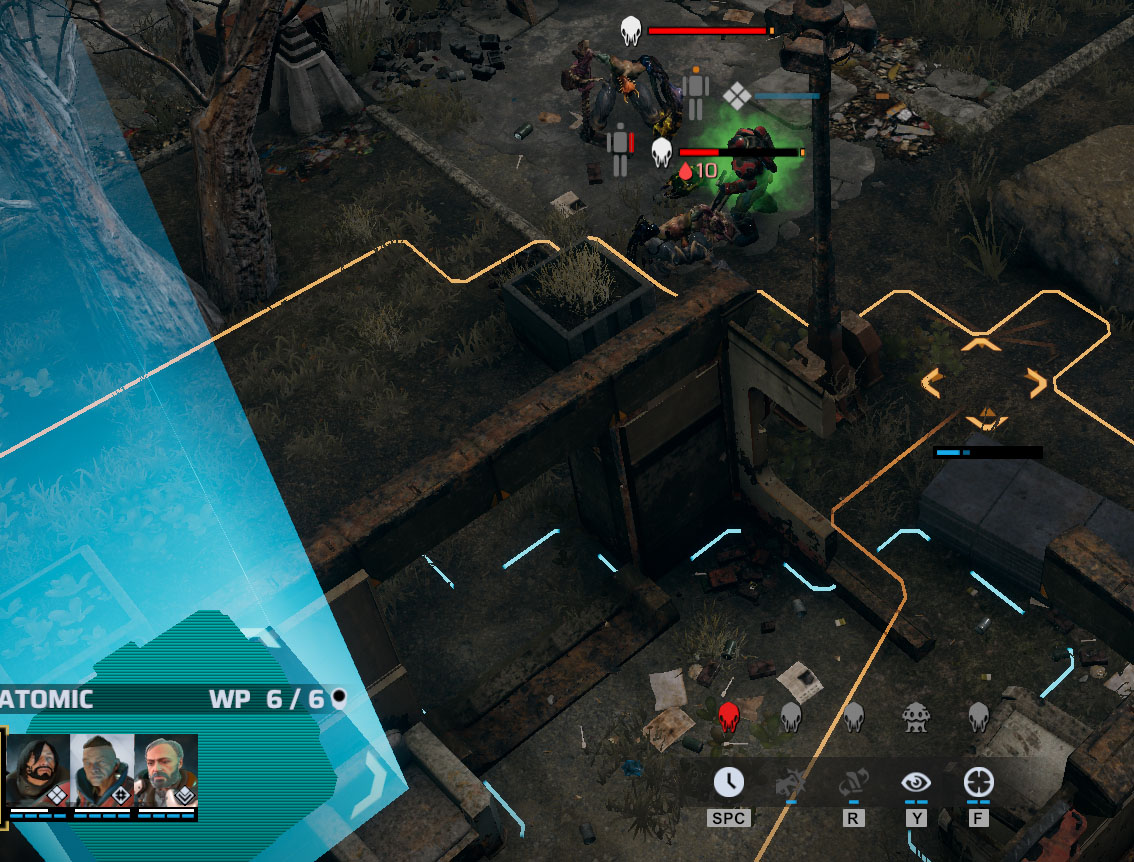 The arthrons go down easily from sniper + assaults + heavy bashing. 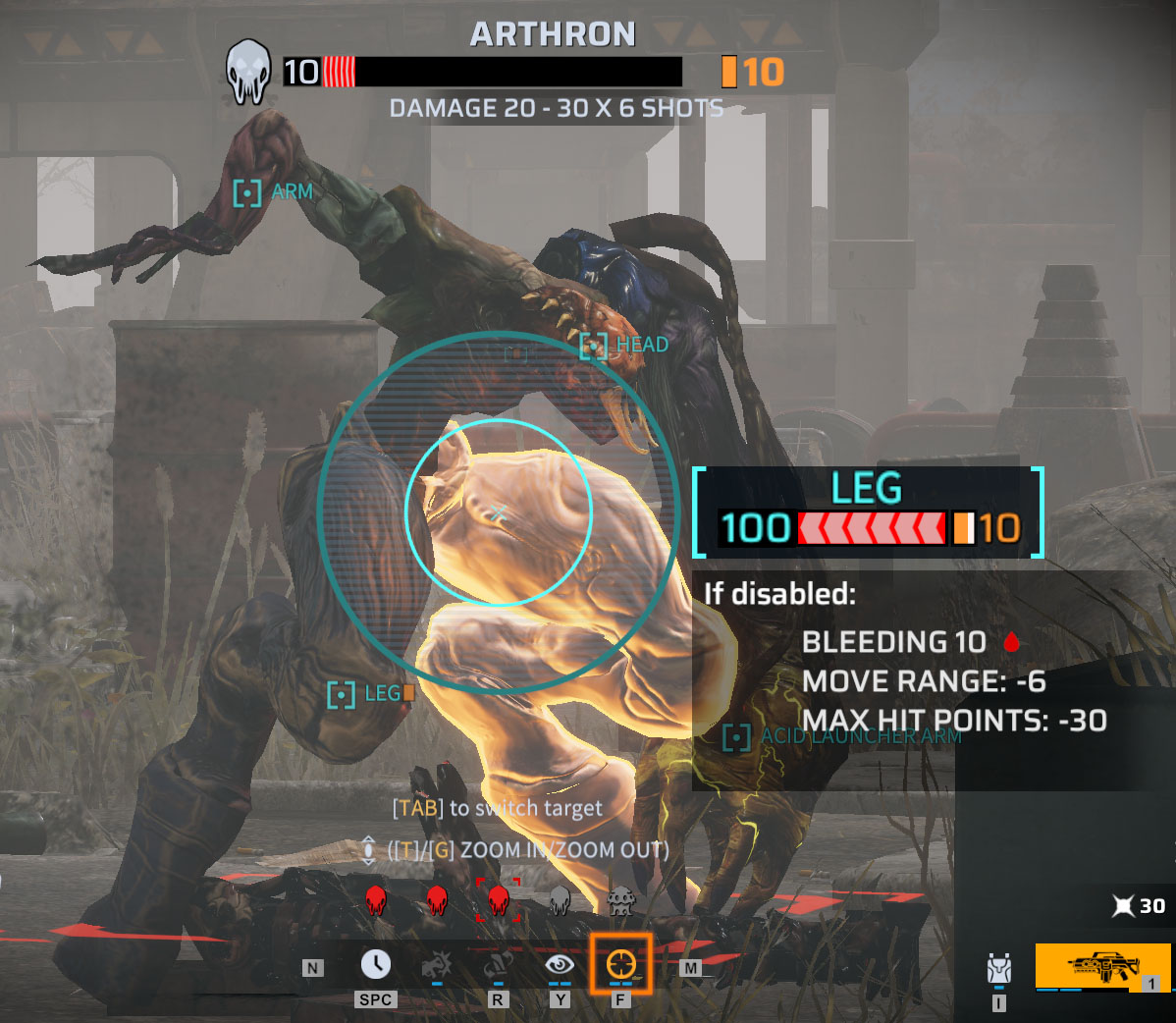 The snipers goes up and checks out the crate. We also see a couple more arthrons, a couple tritons that like to shoot clear across the battlescape, and even a facehugger coming up on us. We’ll keep moving to our left, after the second crate, hoping to keep the enemy coming across open ground at us. One problem will be the tritons shooting from a distance and cover being scarce. It’s important to take the ammo clips and such as well. You can scrap them for additional resources.

The heavy jets over to the second crate. We’ll let him jet to the 3rd one in a turn or two, grab what he can, and then get out of here. He’ll have to recover some will points first.

The position at this point: 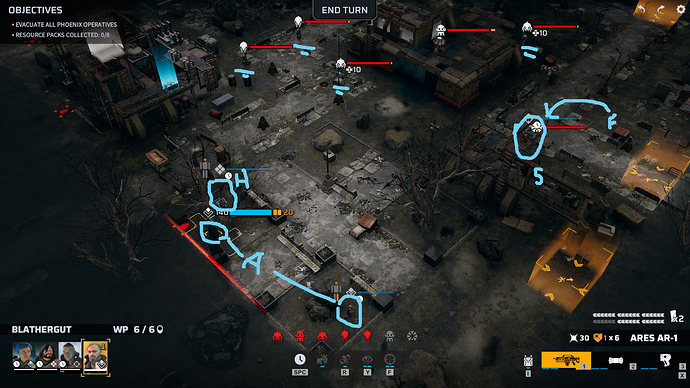 Turn 4: The heavy makes a third jump. One assault runs back and deals with the facehugger. The sniper grabs everything from the crate and fumbles his way through overwatch fire and jumps down beside that facehugger. Other assault grabs what he can from the crate. The Pandorans are getting thicker and we’re not killing any. 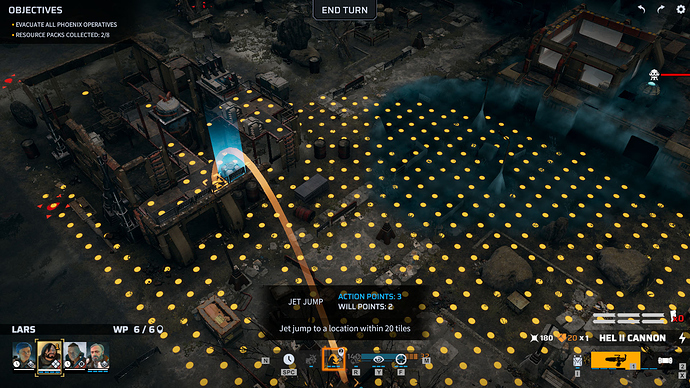 And in the crate:

So now, can we get out of here?

Another facehugger appears out of Mist. Hopefully the sniper (down to almost no health left after taking two bursts from a triton) can kill it AND move 1 space and evac! 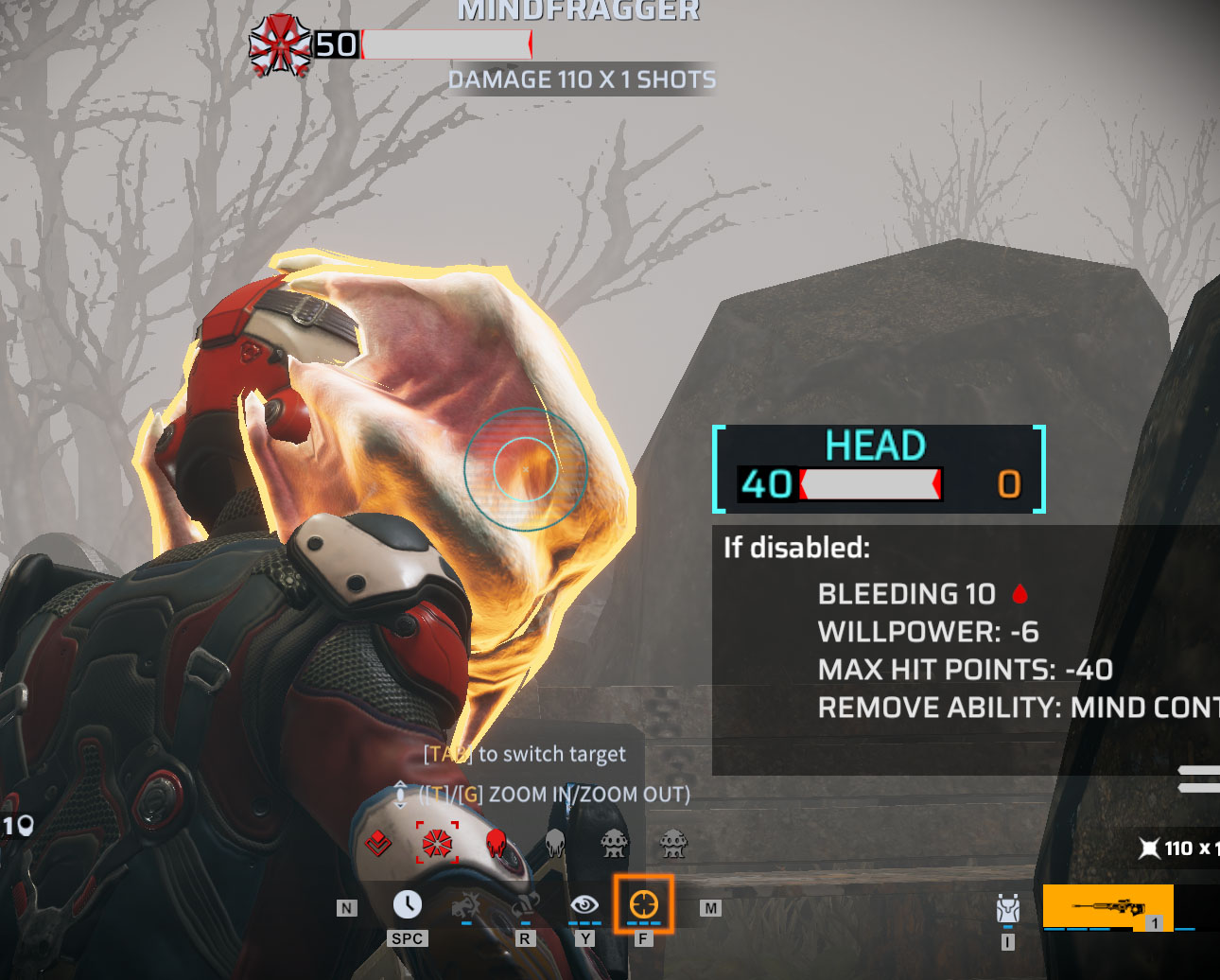 A pistol shot takes out the facehugger but the assault has to stand there for another turn. The heavy jets back again to the evac zone, the sniper evacs. Next turn, badly wounded but alive, one assault makes it out while the other comes up 1 space short! Survives several bursts from distance and evacs next turn. 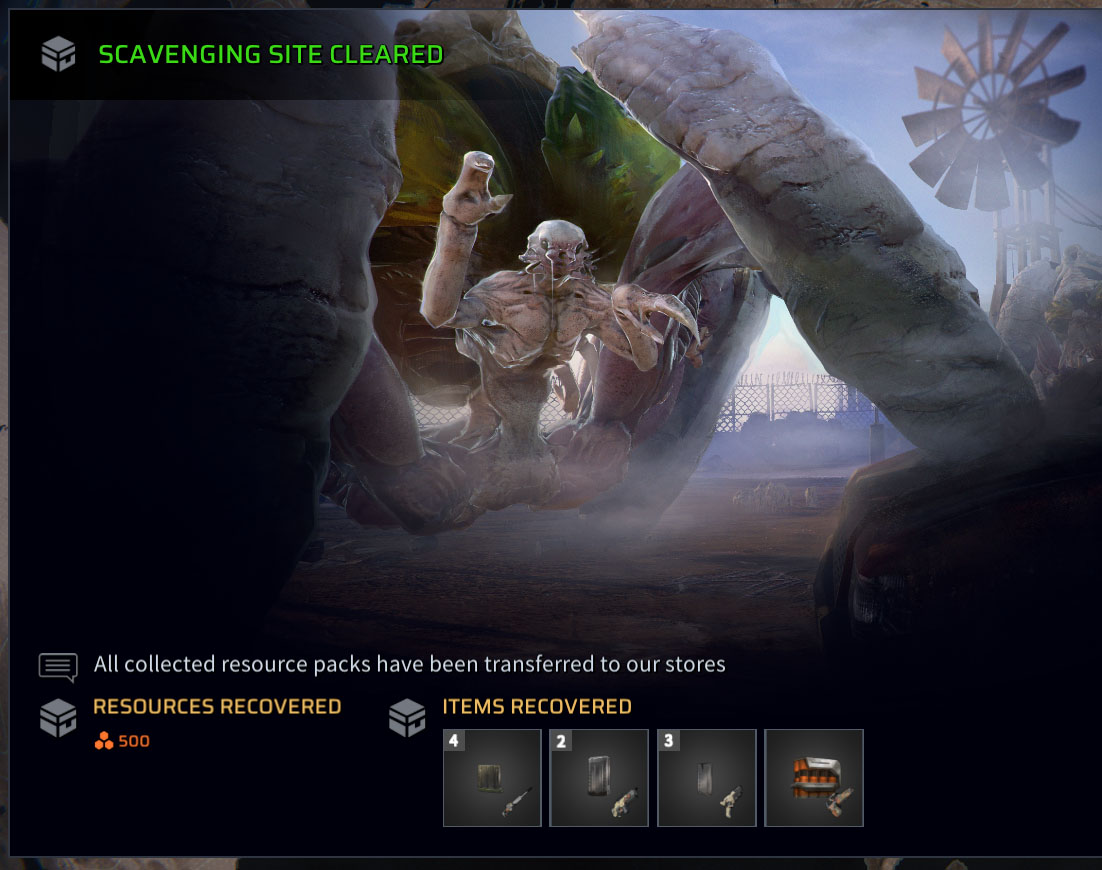 Definitely worth it, though we did get banged up badly, but then, turns out it was in the Mist! Not bad for first mission.

Conclusions: Scavenging missions should be done at all times. They are a major (but often rare) source of income. With a bit more firepower and a couple skills (Quick Aim, Dash) it would have been a bit easier.

FOOTNOTE: It was indeed in the Mist! First time for everything! 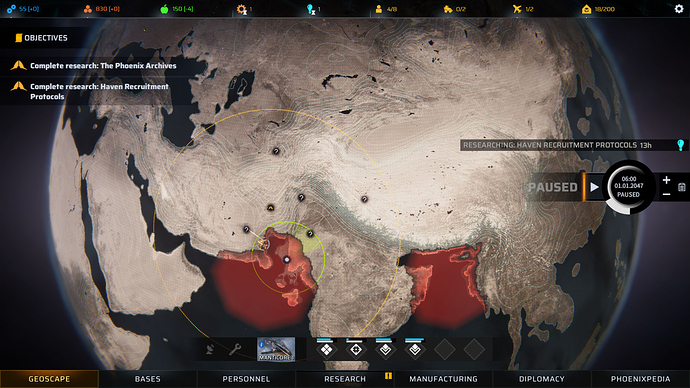 Easy to comment on this one: Don’t do it!

On Legend, it’s doubtful a food production would ever break even let alone gain you a substantial amount of materials or tech. In all my play throughs I have never built a single food production plant. But I mention it since it is a potential (sort of) source of resources.

Third Funding: Encounters on the Geoscape

Random encounters can provide resources as well. They can be minor or sometimes quite rewarding. They are random, as in, when you explore each one the result is random. That location will always be an encounter. Loading a saved game changes the outcome.

Again, not a prime source of resources, and there are a finite number of these on the globe, but very useful, esp. early on when every single resource counts. 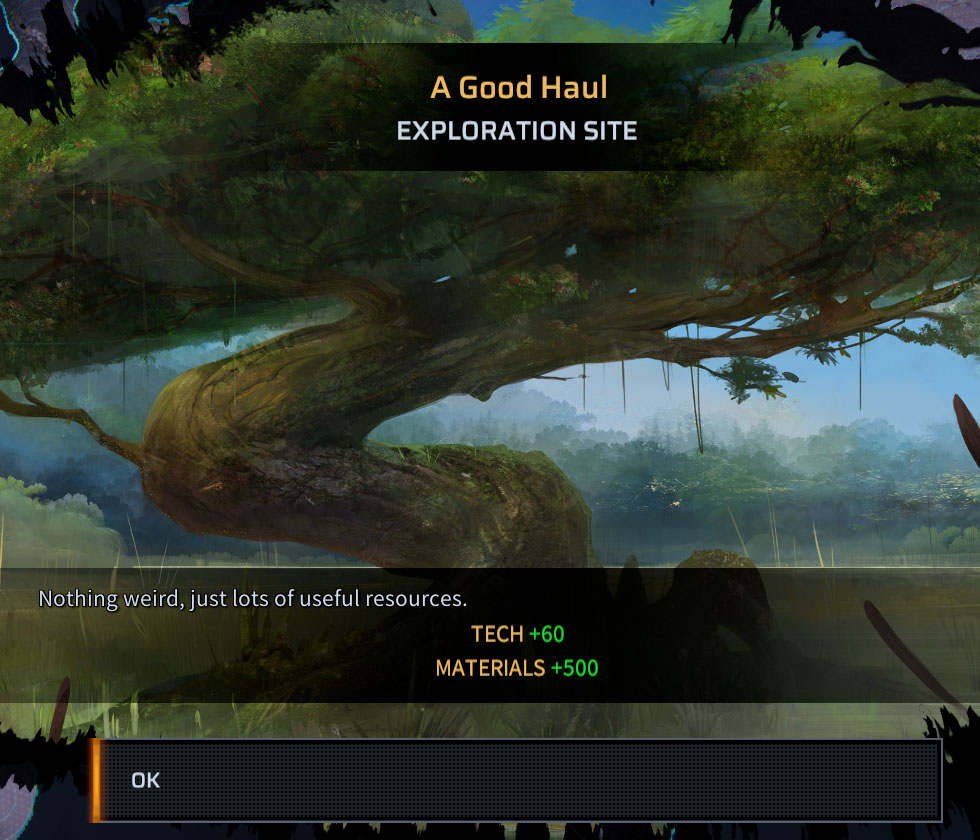 On Legend, it’s doubtful a food production would ever break even

It takes under 12 days to break even with the Anu tech, at 4 apples to 6 gears.

Rare but lucrative! Tricky in that the map is so long and it takes (especially a rookie) a long time to get to the vehicle. But, you can ride in comfy style back to the evac area! 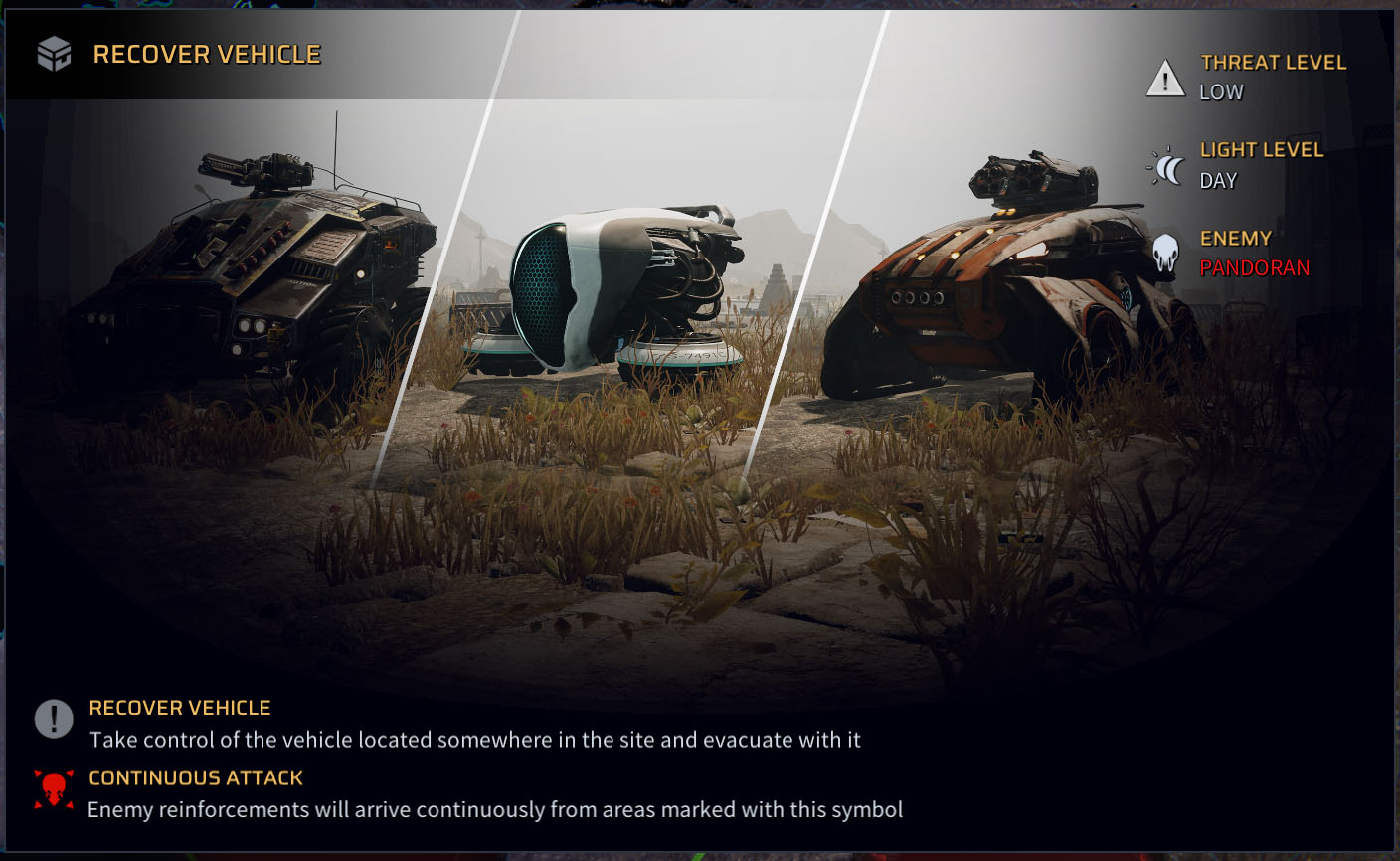 A: Initial fire base goal to the left, around that tree and weird metal statue thingie.
B: Goal of an assault to then move up to the Vehicle. 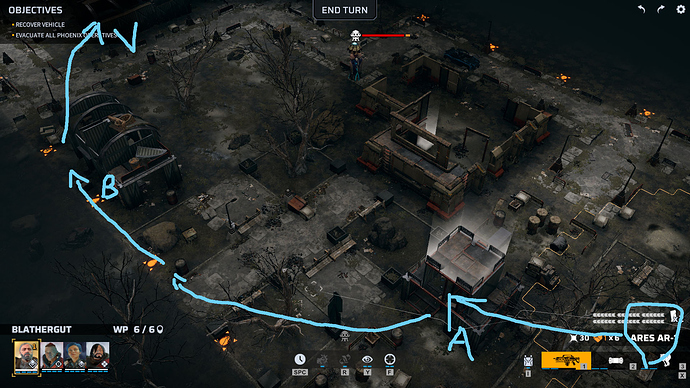 Our fire base worked well, taking down a couple arthrons and a facehugger. The heavy jetted up to assist the assault moving towards the vehicle. He moved out and took a full gun clip on his armour and then bashed said arthron into paste. Assault rides back in vehicle + vehicle also picks up heavy. 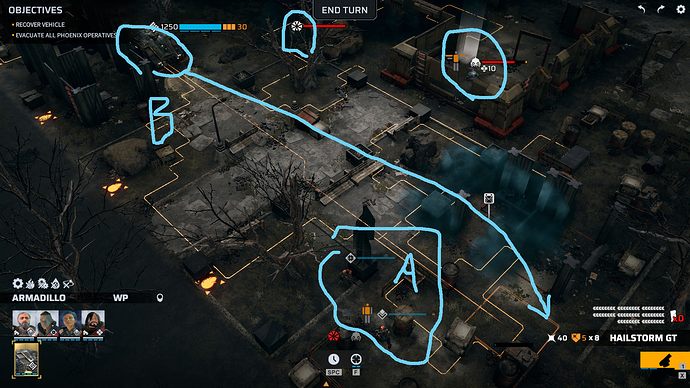 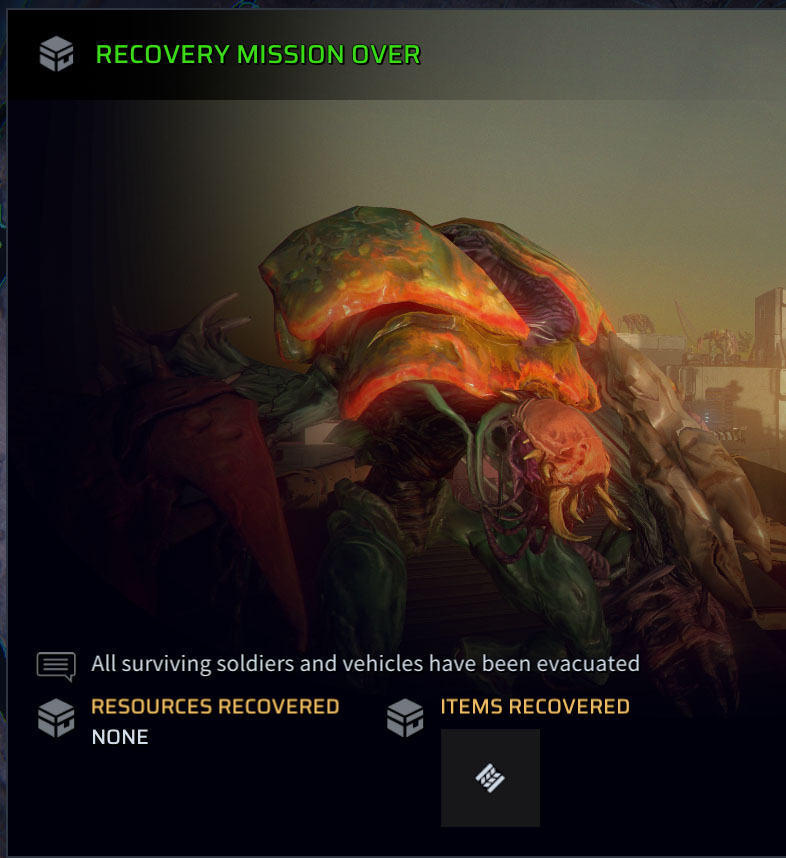 So, great easy way to get a vehicle (expensive and time consuming to build). Sadly, with only the initial air ship, we won’t be bringing it along on missions any time soon. [Goal is to steal a blimp and run a 5-man squad + vehicle. But that’s a while away.]

Lots of gains from these! Experience, resources, and diplomacy increase with defended faction (and minor drops with others).

This is why I would ignore the Phoenix Archives suggestions for ‘next base’ and try to explore (and potentially find a base) in areas of Mist. It is essential to funding your campaign to know where havens are near Mist to be able to have a chance at defending as many as possible. I’ve been exploring around the Mist areas of the start area since there are no other Mist areas anywhere in Europe/Africa/Asia at the moment. [Am looking forward to Cthulhu to see how base claiming is changed and if it works better with focusing on Mist areas.] 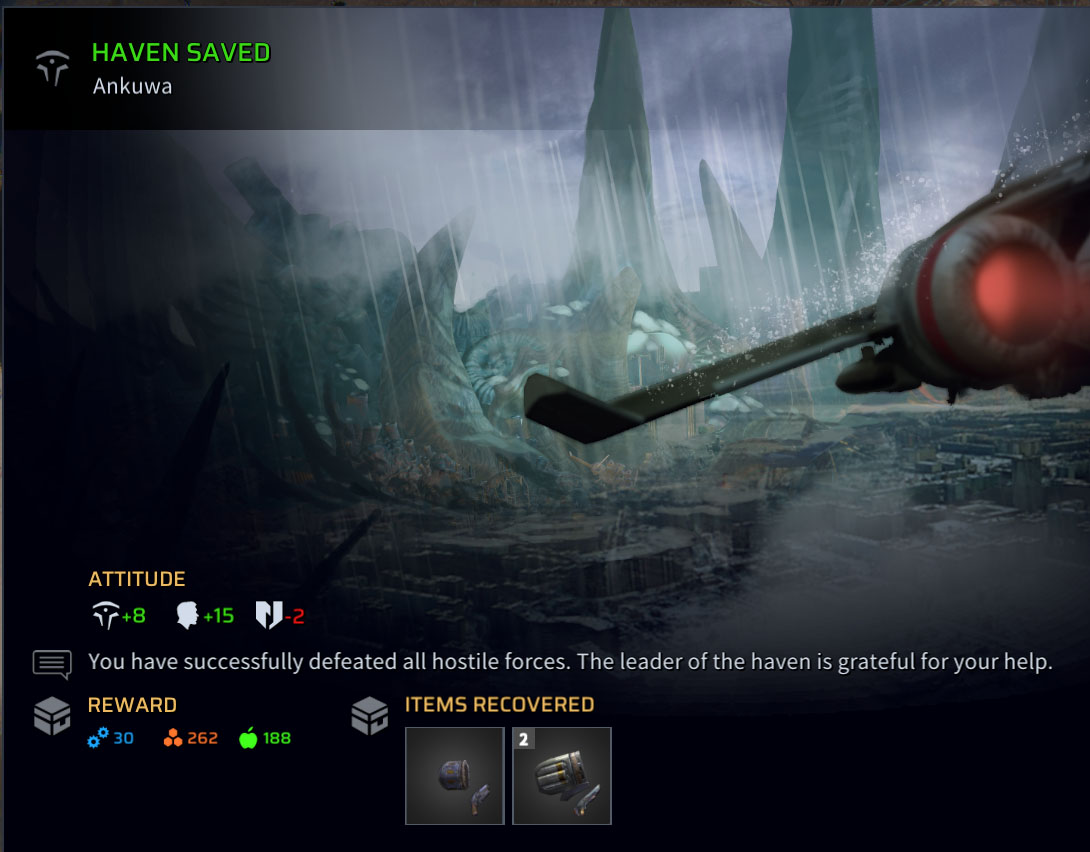 Exploring with Mist in mind: 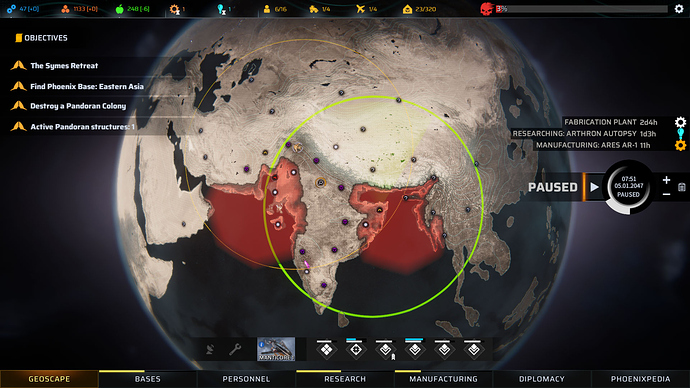