The negative consequences of willpower drop

Is there any effect in the game as of yet should willpower drop to zero?

And linked to that, are there enemies that have the capacity to sap it?

From the original fig: 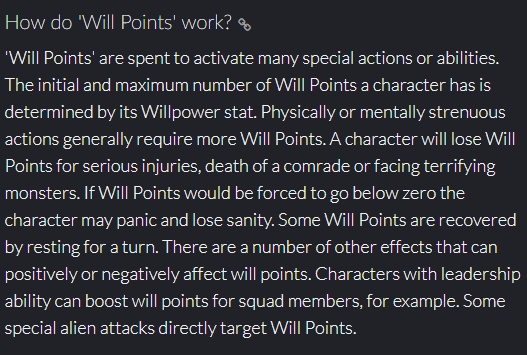 This was one of the aspects of the game that I was particularly looking forward to; those horror moments where shit could really his the fan and relentless degradation of will would lead to worse and worse consequences.

At the moment it feels like will just equals superpowers, but is there any risk in the game yet to make a player wary of using will in this way?

Is there any effect in the game as of yet should willpower drop to zero?

And linked to that, are there enemies that have the capacity to sap it?

as WP ticks down, your soldiers get more susceptible to mind control. If WP goes negative, they’ll panic

Does it happen in practice? Is there genuine danger of it?

The mind control yes, the panic not so much. Of course currently it is incredibly easy to make the enemy panic first

So, when that mind control is there, do you then start to ration the amount of willpower that you’re spending on perks, or is it easier/better to go on the offensive and just nuke everything before it has a chance to use mind control on you?

currently, I believe it is better to nuke everything, and to alpha strike any sirens. Then again, the current build is unbalanced as heck with the assault’s dash/rapid clearance combo

Thats another reason why I don’t like Will Power system, and (especially) the Will Power Name.
Soldier psychic condition should be connected to the third element (“stress level”?) which would be affected by conditions like:
(negatively)

Because now you can be a brave sniper, take some dash, two quick aims to weaken enemies for your comrades so they could score a kill, and quess what, suddenly you are a perfect guy to panic or being mind controlled.