While I’m excited about new changes upcoming to phoenix point, Im a little concerned about the focus on elements to make the game harder overall and meet expectations for the hard core players that have a lot of time on their hands.

I think we have the following player groups

My comment really is this, I’m happy for all players to get what they want, and concerned if it goes too far towards Easy or Hard.

What I want to say is this to the PP dev’s;

Please utilise difficulty level to accommodate all users. If a player wants a harder game please put the enemies new strategy, powers, toughness in the Hard difficulty.
If a player Wants an easier time of it, as they enjoy the world and really want a play through being the hero’s; make is a little easier for them as in the difficulty name “Easy”
If “Hard” is too easy then add further difficulties and add additional enemies, damage and no saves, etc…

Also, allow a user to change difficulty in mid game. Again if the difficulty adds or removed certain abilities or strategies then it will hopefully match everyone’s expectations.

Personally I cant be bothered doing Lairs at all, so I just console past it. In game terms I nuked the entrance Starship troopers style.

I will say though Im really enjoying the game and on my 5th play though. Never finished because the last level was tedious.

Looking forward to all the DLCs

Definitely the difficulty levels should allow for the game to be enjoyed by a wider public.

To be honest, I don’t see that many “make the game harder” comments. Complaints about some abilities being to powerful, or some mission types to easy to cheese, isn’t really asking for higher difficulty - just better design. If for example, something like Rapid Clearence were to be removed or change, it would need to come with a change to how enemies are deployed.

I find this skill necessary right now to clear and excessive amount of crabman and Triton with one or two assoults while the other members focus on real threats. However, it’s not fun to do. It’s a mindless process of clicking on things, and it’s doesn’t make for a good gameplay. I am not for the game being harder, just better.

I personally think that Lairs are amazing, but they are exhausing - I have multiple ones to clear right now and my playthrough came to a halt, as I can’t do more then one at a time. However, if I remember well there is upcoming change that will reduce amount of attack on haven - I imagine it will lead to lesser pandoran bases to raid. And that should make for a better overall design - rarer but more engaging missions, which do feel like you are raiding an enemy territory.

Players say its too hard around early mid game. Ones who have not identified really what research you need to beat some enemies.

Yes, on “EASY” PP should be like a walk through the story, so that new and TBS inexperienced players can slowly get used to the high PP complexity. This would save Snapshot many complaints.

Complaints about some abilities being to powerful, or some mission types to easy to cheese, isn’t really asking for higher difficulty - just better design. If for example, something like Rapid Clearence were to be removed or change, it would need to come with a change to how enemies are deployed.

I find this skill necessary right now to clear and excessive amount of crabman and Triton with one or two assoults while the other members focus on real threats. However, it’s not fun to do. It’s a mindless process of clicking on things, and it’s doesn’t make for a good gameplay. I am not for the game being harder, just better.

Instead of “even more” opponents, the superskills should be cut off or hard nerfed. Take a look at this screenshot as an example. It was designed to “need” weapons of mass destruction. Someone who doesn’t have superheroes is just getting frustrated here! But if there is access to one of many terminator builds or certain combos from superskills, this “danger” is transformed into a crab slaughterhouse. As soon as the superheroes have been discovered, there can be +5 or +10 crabs on the opponent side, it doesn’t matter at all! “Just” more clicks are required. Snapshot brought a lot of great and innovative ideas to PP, but this is definitely not one of them.

r/PhoenixPoint - I'll just take a look at the corner with my last AP point.... 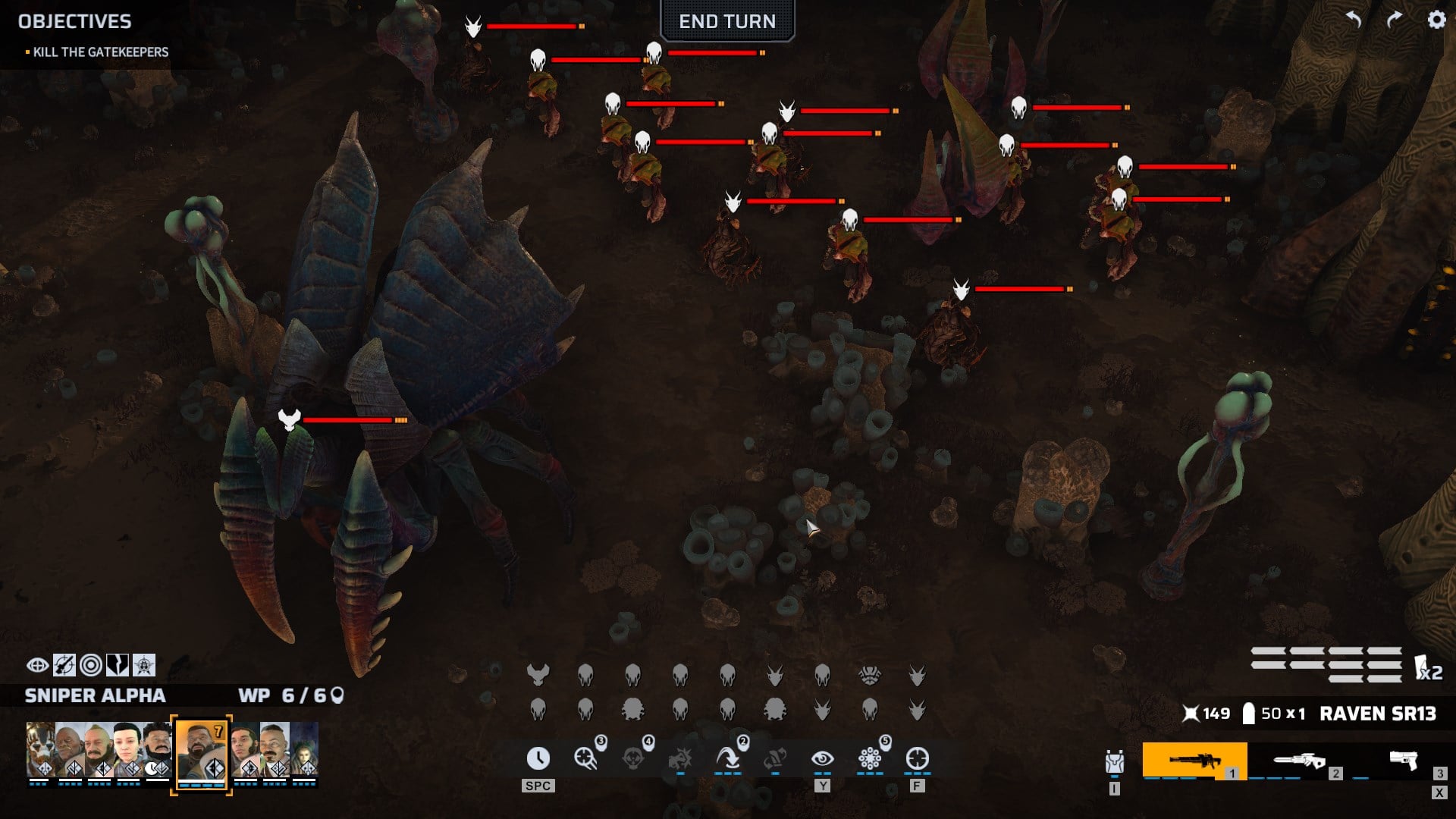 Do missions scale to the level of your team?

Most liked comment: +34 -0
Waiting for the enemy to take their turn when there is 20+ enemy units … this is the reason why I don’t like these kinds of games towards the end … They need to make AI smarter not throw more of it at you …

Furthermore:
The too long waiting time of the AI turn is also the result of the “many” opponents! There was even a request on QA Video and on Canny (actually 77 votes)

As one of the most persistent voices calling for super-skills to be nerfed, I second Wormerine’s comments above.

We don’t want the game to be harder, we actually want to make it more easy for less experienced players by removing super-soldiers (and therefore the need to have super-soldiers) from the endgame.

I fully endorse your call for these limitations to be linked to Difficulty Levels and have been advocating this for a long time. The usual objection I’m presented with is that this would ‘require balancing the game differently for different Difficulties’, but I don’t agree with that.

See, the present difficulty curve (at least it’s not a spike anymore) comes from the game adjusting itself to the success of a player as (s)he discovers the many different ways you can make Squad Skills work. As the Squad gets more successful, the difficulty goes up. If you are acing your missions - or save scumming which amounts to the same thing - the difficulty goes through the roof. And said difficulty is currently expressed in deploying vast numbers of Pandas with higher stats & armour.

Now, if you a) put a limit on the number of times you can use a super-skill like Rapid Clearance and b) adjust the number and strength of the Pandas to reflect the fact that a soldier can no longer off 10 Crabbies in a row - so that each Crabbie doesn’t have to have the damage output of 10 of its dead buddies just to make a difference - you are immediately making the enemies easier. Then all you have to do is make the number of times a skill can be used larger on Easy Difficulty than it is on Legendary - so that a skill that can only be used once/turn on Legendary can be used 3 or 4 times/turn on Easy. Suddenly the game is a lot easier on the lower difficulties than it is on Heroic or Legendary, and all you’ve had to do is balance it for the higher difficulties with less frequent super-skill uses. So you don’t have to balance the game 4 times for 4 different Difficulty Levels, you only have to balance it once for the highest, and then ease the limits on skill uses in the lower levels.

Now, as I understand it, PP is already addressing these issues in a number of ways , so we’ll just have to wait and see what they come up with.

All I ask, Snapshot, is that you give us a Second Wave Option that allows us to select how long the game should last for us. I don’t play on Legendary because the timer is too short - I want to savour my time in this world, not race madly to the end, only concentrating on the key plot-related elements and missing out on all the other lovely content that’s there to be explored.

All I ask, Snapshot, is that you give us a Second Wave Option that allows us to select how long the game should last for us. I don’t play on Legendary because the timer is too short.

Or add modular difficulty option. Not enough games do that. Upcoming Desperados3 has that - difficulty consist of different settings (player unit health, available resources, enemy configuration, how quickly enemy detects player etc.) and each of them can be adjusted to create a custom difficulty setting.