I know these ideas may be a bit played out or already mentioned, However I cant find them and wished to see them not only in PP but also in Xcom and Xcom-2.

Here are some of the planned ones: 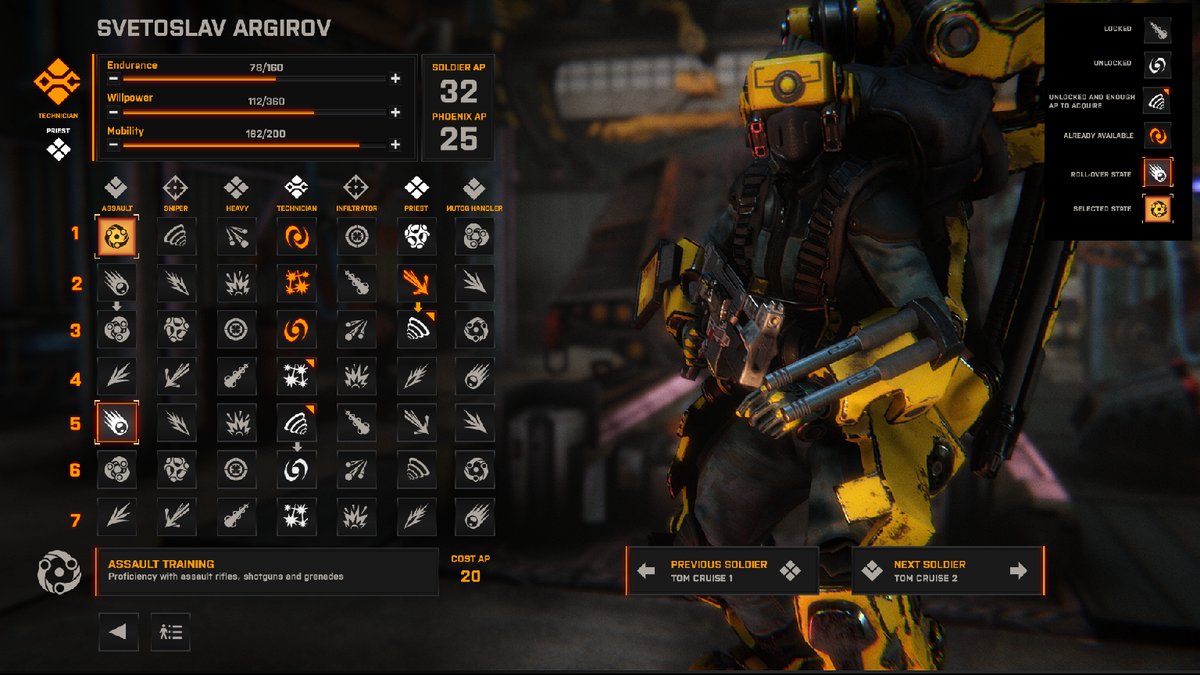 So let me know what you guys think. Then we will see if Snapshot likes any.

(Tamer,Handler,Outreacher) A class that uses small arms and a pet type creature. Tamer would be based on PP using a standard attack dog with customization and gear for both the tamer and dog. Handler based on the Anu uses the same said dog but now includes alien mutations on both the handler and dog. Outreacher based on NJ uses a small drone that can be outfitted with a few small guns and upgrades. So tell me what you all think.

Yea they had some interesting builds already. I am simply worried they may be to played out or basic. For example in Xcom-2 I noticed the classes remained tightly uniform but these people are supposed to be a last ditch effort to survive no one would fight the same way. Plus the player is less likely to invest in a soldier if they can simply be replaced by another rifleman with the same said skills. I honestly doubt my ideas would help the team at this late stage but figured id put them here anyway lol.

Technician has deployable turret (and can repair your moving-turret-vehicle), Infiltrator (from Synedrion) had drones in concept (though more for reconnaissance, I’m not sure how will it change for release, it can be a visual effect only, or even discarded).

I was already aware of the mutog Handler, the recon drone is new to me so thanks for that info but that’s still rather baseline the point of my suggestion is a class that changes over time. Starting as a PP tamer and changing based on your choice of allies or tech stolen etc. For example the tamer talks to Anu Handlers and accepts an offer to “upgrade” his dog thus becoming a handler. Or he buys, steals, you get the idea a NJ ground based drone thus becoming the Outreacher. Its less about the class itself and more about changing how soldiers become classes I guess. inserting it into the story rather than the overused menus that really take away from the immersion. However as I said its only an idea.

Also the overall goal of this idea is simple make the soldier a result of your choices. Leading to a strong desire to keep him/her alive. Then its not just some trooper that can be effortlessly replaced its your squad mate. Honestly I may not be getting the idea across correctly as I’m not the most articulate person.

But if it’s the result of your choices, you can easily replace them.
If they depend on RNG (be that “training roulette” or Darkest Dungeon-style “minor” buffs/debuffs), you will have a harder time finding a replacement, but you will not easily make your ‘ideal’ soldier either. (Which is a hard to balance trade-off.)

Its less about the class itself and more about changing how soldiers become classes I guess. inserting it into the story rather than the overused menus that really take away from the immersion.

You train them to be able to use class X, which sounds logical, adds to the immersion for me, and I don’t think giving deep backstory for every single soldier of yours when you have dozens is a good idea. It’s either too time-consuming (going on ‘quests’, clearing required stuff to get your favorite class) or meaningless (just another dialogue-box to click before you select your favorite class). You can justify with lore how you “unlocked” the class, but I don’t find it realistic to do that for every single soldier of yours.

You train them to be able to use class X, which sounds logical

is it logical for a basically cult (Anu) or Military State(NJ) to just give away valuable training secrets to PP. Not really in a realistic world those secrets are valuable they would be more likely to trade them on an individual bases for goods or services. so for example say you wanted to teach your assault a NJ skill or upgrade them to an NJ version of the assault class. Instead of using a menu you take that soldier to a friendly NJ haven and trade favors or goods to have them train him.

I mean every group is out for one goal survival and you don’t survive by teaching potential enemies how your army works. Most real life groups would use that knowledge as a valuable trade good. Plus take the US army not every soldier has what it takes to be a marine or a ranger. Even the ones who do have to be trained more than once so to would be more immersive to have NJ teach PP how they work on a per troop base. and it would not really make the game to clogged as a team would only consist of at max 8 troops. So when one dies you have to take a new troop to a NJ haven and repeat the process for a small payment or favor like say a small fight or mail run something like that.

But if it’s the result of your choices, you can easily replace them.

and for this part it would not be easy to replace them by choices. For example you would have to retrace everything you did to make that troop unique. Recollect the same gear fly around and redo the same training level him up all that. And the idea of a randomized skill pool is also good but RNG is terrible it almost never works and allows ridiculous mistakes to occur such as a rifleman from the worlds best armies in XCOM EU to miss a point blank flank shot of 99% or even the same skill being learned twice in other titles. But I wont post anymore for awhile as its likely to late in development to even try any of this anyway lol thanks for the convo I enjoyed it @Potkeny.

Idea sounds good, but for the RPG type of game based in the same world - something like Fallout, but in years 2035 - 2045 in PP universe.

In Phoenix Point strategy ge we will have probably over 50 soldiers, maybe something like 100. 10 to 20 in each base, and probably more than 5 bases. So crafting their all skills and classes would be too much time consuming.

BTW. I think that soldier customization is missed idea and unnecessary process in PP development. I would prefer that the team could use that time to add more aliens, create more varieties of locations and props to fill them up, create more weapons and equipment and don’t do stuff related to haircut and color of the eyes.

You bring up the US military. Not every Spec Ops person has to do the training multiple times to pass. Not everyone who fails would be able to eventually pass (my uncle blew out his knee twice at Ranger school and the Army said he could go back but if he blew out his knee again then they would medically separate him). The US also has various joint exercises, embedded Spec Ops to train locals in foreign countries, sharing of various TTPs with allies, etc. So it’s completely reasonable/plausible for NJ or Anu to “give” us such info once we have done various things with them (built alliances, conquered them, espionage, etc).

A real army would have FAR more troops than what we will deal with in PP. You would need some way to have classes. There could easily be a representative from X faction on hand to teach us such things. There could be soldiers from X faction who have decided to follow us and now train our troops.

At the end of the day this game is more strategic/tactical than RPG. What you’re suggesting would better fit into something like FiraXCOM where the game is more RPG with it’s smaller squad sizes and OP abilities. I find it to be too much micro or needlessly complicated for not enough return on the gameplay experience. Plus as we go down this road I think it will be polarizing in regards to people enjoying the game or not.

Is it logical to train your allied forces? From my perspective, the answer is yes.

They are not providing free food, they are strengthening their allies who fight against the same common enemy, and only after they earned their trust.

(Or you can just raid them and stole the tech… possible, and I love the idea.)

You can take up to 16 soldiers to a battle, and then we did not even count the backups, the multiple other bases we control are in need of soldiers too… no, that “max 8” doesn’t sound realistic in PP.

Well, that’s the thing, they don’t just “give away” the secrets to the classes. One of the draws for the diplomacy system in PP is that you’ll have to build up a strong reputation with Anu, NJ, or Synedrion for them to give you the tech for their classes (Mutog Handler, Infiltrator, etc). Either that, or raid/steal the tech from them ;o

They need to add this to a backer build asap, it looks so cool.
(and helpful)

Backer Build? No, though it does sound like an interesting idea for a mod after the game releases.

Edit: If you mean the skill selection stuff then I agree. Originally I thought you were talking about the idea put forward.

They need to add this to a backer build asap, it looks so cool.
(and helpful)

'twas from their twitter, as “work in progress” teaser, so sooner or later it will be added (but I would not bet on it before BB4).