Hi guys, I would like to know your opinion about Jormungandr. To be honest, while it sounds great to have weapons of different ‘element’/mechanic, the Acid one is too niche for me (at least on my level). It’s a heavy weapon with low basic attack but solid acid.
If I am correct, this is a Queen-killer ? Right now I tested it in the Lair, it was OK to take an armour from the hatchery and Chiron, HOWEVER, because it’s still a heavy cannon, it means you have to be close, thus if you are close you already have a firepower to destroy hatchery without the acid… so what’s the point?

(ofc this weapon is COMPLETELY useless for the first 80% of mission, as it won’t kill crab nor triton, while they will still try to kill you).

Am I missing something?

Can you post screenshot of it? I haven’t found it yet, so it is hard for me to judge. 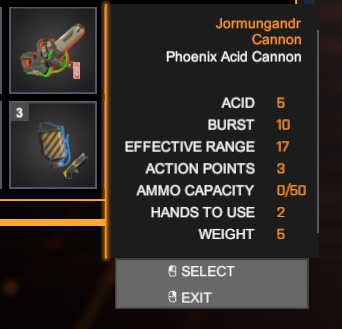 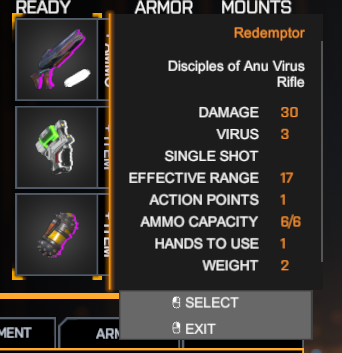 Two interesting weapons:
Acid - removes armour from the enemy, then eating the flesh
Virus - reduce WP per turn, again sounds like something you want to have on chiron or siren to keep them in panic

Jormungandr fires 10 shots in one burst which apply acid status equal to 5? Interesting. This is definitey not a weapon for fast killing, but over time it can make any enemy so soft that even simple assault rifles can kill such target. So yeah, probably you described it well as Queen-killer. I suppose it is far more effective at removing enemy armor than explosive weapons.

Redemptor should cause change into zombie, but I suppose aliens don’t need that change. Maybe it is a weapon to fight other factions? Definitely weapon used as long term solution, not instant kill. Zombies should die after max 10 turns.