Hi Guys! I have developed a strange hate & love relationship with Phoenix Point and want to submit some bugs i have found very disturbing.

1.) Savegames are often not loadable on certain mission (espacially with Anu Defend Scenarios)
An issue which pisses me off because i lost a lot of tim 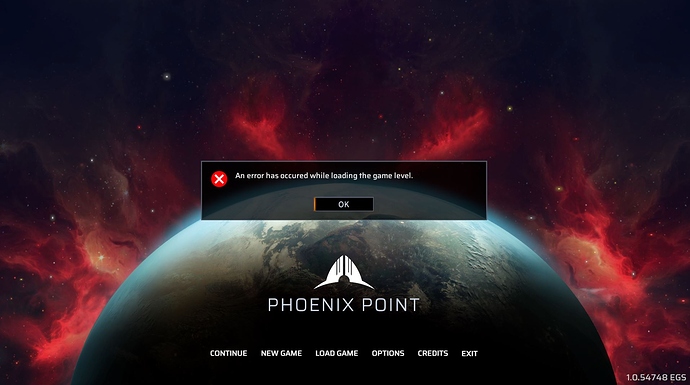 After this error occurs and u try to load another savegame the game will go in an infinite load screen. Only way to fix it is Alt + F4 and relaunch (and dont touch the damaged savegame(s))

2.) The Game likes to think very long when you remove a Mindfragger with the Technican ability or isnt responding anymore.

4.) German localization is not complete and sometimes text is in english.

5.) Scylla queens still spawn Mindfraggers even if you destroy the abdomen (worked before patch).

A lot of “small things” hinder this game to be at the top and even outlast XCOM 2 War of the Choosen.

I hope you will invest some good time in fixing the zillion small bugs.

This should fix the problems. Had similar ones my self. Turned out it was do to some corrupt files.

On all points 3-6 those are valid and this isn’t the first topic pointing them out. but the first one I know of from personal experience is a corrupted file.

Hello! Thank you for your answer but it didnt help. I have 2 folders. First one is named “Saves” and the other one is named “d11ac29b98a54a349711f1d1a1b48d73”. I tried to delete all of the Savegames and downloaded them from the cloud again. Same error message… couldnt load the level.

Ok when the error pops up hit I think f12 and send in a full bug report. That should send snapshot pretty much anything on the game file that is needed to find out what is going on.