Diplomacy Rewards feel like they're the wrong way round

Something I’ve been thinking for a while now is that the Diplomacy Reward system is backwards.

As it currently stands, when Dip hits +25, a Faction tells you the location of every one of its Havens on the map. This is NOT a good thing.

Suddenly, you have scores of Havens that the Faction is expecting you to defend - most of them completely out of reach on the other side of the world - and you most likely haven’t even built a second decent Squad yet. So suddenly your standing with that Faction takes a significant hit because you physically can’t defend every Haven they have on the globe.

Now this may be a deliberate design feature, designed to keep your Diplomacy score down to manageable levels, but I doubt it. It’s such a negative feature that I deliberately don’t bother doing the +25 mission until I’ve got a decent double-squad up and running, to avoid as much of the bad karma as possible - after all, it’s not like knowing where all these Havens are does much for you other than narrow the search for you next base down to c.500 spots rather than 700.

Then you hit +50, and you get a massive info-dump of Tech, half of which is already obsolete because you’re now entering the mid-game. Yep, I coulda done with that Acid Pistol earlier in the game, but now the only thing it’s good for is a club.

It feels to me like these are the wrong way round.

Now I know that the devs are toying with the idea of feeding us Faction Tech on a more graduated basis, and I think that’s a very good thing. But I also think that they shouldn’t reveal all Havens across the world until +50 at least, when we are at least in some position to defend them.

I think that REP 50+ is rewarding too many researchs done at the same time,

and exploring is a hard work, if I get havens location after REP 25+ mission and that will impact my REP -3 for every undefended haven is fine for me, I compensate that attacking alien bases.

As far as I know, even if one is not aware of the haven locations, they are attacked anyway. When one finally gets to a remote corner of the world, they will find destroyed havens. The upside of getting all haven locations is that one can manage to reach areas that were previously unreachable.

I think the tech flood part is a pretty solid point.

As far as I know, even if one is not aware of the haven locations, they are attacked anyway. When one finally gets to a remote corner of the world, they will find destroyed havens.

Yes, I can confirm.

and exploring is a hard work, if I get havens location after REP 25+ mission and that will impact my REP -3 for every undefended haven is fine for me, I compensate that attacking alien bases.

My take on that too.

IME, there is really no meaningful diplomacy layer as such in the game. You do all the diplo missions as soon as they appear, don’t attack any faction, destroy enemy bases and you end up allied with all the factions.

You could also do faction missions against other factions to accelerate this process, because the rewards outweigh the penalties (so attack Anu on behalf of Synedrion, and then attack Synedrion on behalf of Anu and you get a boost to your rating with both of them).

The upcoming changes to avoid the research flood are nice, but I wish there was something more to Diplomacy, something that would make it meaningful to opt for allying with only one faction instead of the three. 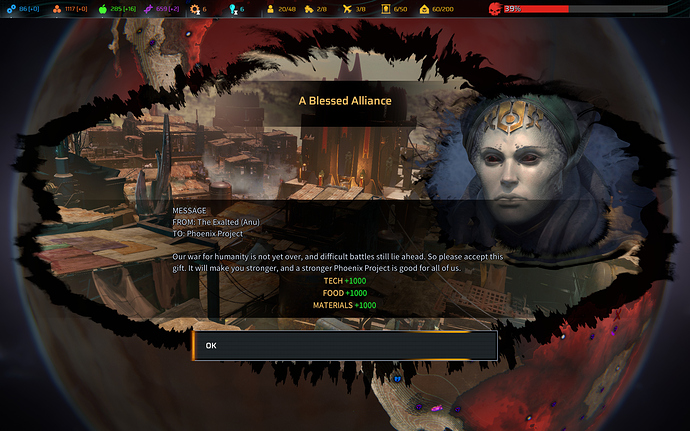 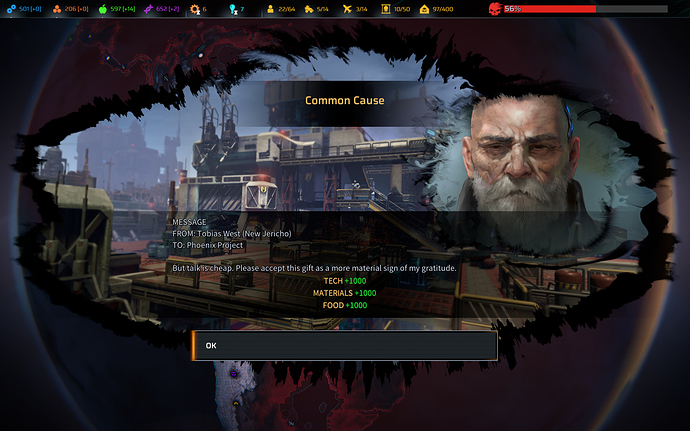 If you didn’t defend heaven then you don’t have any loss in standing. But at 25 standing you can see much more potential recruits and don’t waste your time at scouting unknown exploration points. For me it’s good without any drawback.

Perhaps up to 49 a small punishment -1rep,
after 50 -10rep,
and with a max alliance -20rep for missed defense
“the higher you climbed, the harder the fall”,
“higher connections over resources”

“little help, help too”
(for a weak squad, it is necessary to destroy many weak targets)

I’m pretty much in agreement here. But under the current build for me personally, the most fundamental benefits of diplomacy is that at 25% the Havens are revealed. Which means that Time which is a not so obvious commodity is better preserved. The benefits are:

Under the current build, if the 25% diplomacy structure changed, the game would get a lot more difficult. Perhaps it’s a question of playing style?