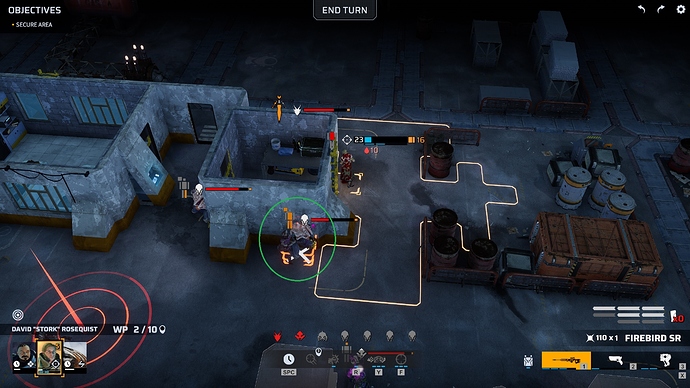 It was overwatch. Return fire does not work that way anymore. Only the one being shot at can return fire. I shot the siren, not the Arthron.

I think when you’re on a corner like that Arthron is, your LOS counts the fact that you can lean out to take a shot. So your soldier might not have had LOS on the Arthron, but it possibly had LOS on you.

That being said, this shouldn’t have happened (supposedly) with the new Return Fire rules where only the unit you’re shooting at can Return Fire? Unless you’re using the Return Fire mod that changes that behaviour back, or the devs changed RF behaviour again.

He could have been using the Return Fire mod, which would be my assumption unless the devs also updated Return Fire back to its previous implementation (intentionally or unintentionally) with the latest patch. In which case it should be the same as the Overwatch case you mentioned.

It was overwatch. I tested if there is LOS between the two on the tile he shot from afterwards. There was not. In any case, this is a bug. The Arthron went out of his way to fire. This cannot be intended.

I tested if there is LOS between the two on the tile he shot from afterwards.

Remember that Arhrons can have different point of view than soldiers when aiming. So your soldier aiming from that spot could not have LOS to the other soldier.

This cannot be intended.

This is intended unless I miss something.

Too bad that we don’t have video record of the situation.

It is unavoidable damage. If this is intended I might as well play Yahtzee. Again, the Arthron was not even visible. I did not move a soldier. I took a shot at an enemy right in front of me, then an arthron popped up out of nowhere and shot me in the back.

It is unavoidable damage. If this is intended I might as well play Yahtzee. Again, the Arthron was not even visible. I did not move a soldier.

The soldier moved to take the shot. It’s debatable whether this should trigger Overwatch or not, but there was still movement. If stepping out to fire isn’t supposed to count as “movement” for the purposes of Overwatch (without an explicit move action), then maybe it is a bug. AFAIK it might be intended. If you have a save file from before it happened (or immediately after) or you still have the game open, you can report bugs with F12 and it will take a screenshot, save the logs, and upload the save to the dev team so they can determine if this behaviour was intended.

As for it being “unavoidable damage”, it would have been avoidable by realizing that the Arthron might have had LOS by being able to look around that corner even if your soldier might not have been able to due to its different model size/shape. Keeping the soldier there was a risk with the Arthron so close and able to lean out to shoot anyway next turn, and the possibility of it being able to lean for the Overwatch shot (and you would have taken a shot from it also if you tried to move away after taking your shot against the Siren).
And if the Arthron was hidden until it shot your soldier due to LOS, then you made the best decision you could with the information you had since LOS isn’t necessarily bilateral (one unit having LOS from one spot to another doesn’t necessarily mean it works back the other way, given one being behind cover with regards to the other and being able to step out).

No matter what, that soldier was going to get shot by that Arthron given this placement and it being on Overwatch though. Whether it was from getting shot while attempting to shoot the Siren, moving after shooting the Siren, or staying put and getting shot by the Arthron on its next turn.

The soldier moved to take the shot. It’s debatable whether this should trigger Overwatch or not, but there was still movement.

Yes but like I said he did not side step to a tile where there would have been LOS. He moved forward along the wall. As I have pointed out numerous times: from the tile he took the shot from there was no LOS either. It could of course be that the arthron had LOS. I still think this is a quirk that needs some tweaking. I don’t think overwatch shots should come out of nowhere. I.e. if the one on overwatch has to step out of cover to take a shot (which is what the Arthron did) it should not trigger. It’s a quick reaction shot - no time to do fancy manouvering like that.

Just curious as I haven’t played much since patch and didn’t had this situation yet.

Shooting triggers overwatch (because of sidestep). That’s true, right? Does it mean, I’ll get shot twice if I shot a Return Fire Arthron that’s on Overwatch? Once as I sidestep, and second time as RF?

Once as I sidestep, and second time as RF?

Technically - yes, before an incoming shot in increments and after in response.

I tested if there is LOS between the two on the tile he shot from afterwards. There was not.

if the enemy is within 5 tiles (the minimum perception distance)