The 10 damage are not adding to the overall damage dealt. The enemy only can’t recover this 10 damage if he heals.

Just checked it on one of my own soldiers and you are absolutely right.

Thanks for the comments, I will be amending the post later.

I was reluctant to mention Stamina because, TBH, I have never experienced the penalty from the soldiers being tired or exhausted (my guys & gals need healing way before they need R&R), and I have found no reliable, precise information on at what point that happens.

If someone can explain it I will just plug it in.

Biggest chance to hit is around the border of inner circle.

Why is that? (yep, maths is not my strong suit

As I tried to post it, it turns out I exceeded the character limit per post by around 100%, so I’m breaking this into three parts.

If you want to arrange the text, you can put the table of contents on top using the quote mechanism, like a hyperlink.

You can also speed up the search for the right thing using spoilers.

Why is that? (yep, maths is not my strong suit

Beause of probablity distribution. In below picture imagine that value of 300 is center of aiming reticle and value of 400 is border of outer circle. Most probable is that bullet will fly in the middle of that range.

To be more specific. When you fire first thing randomly generated is angle between 1 and 360 at which bullet will fly in that aiming reticle (I suppose that each angle has the same probability). Next on that angle is generated specific point (bullet trajectory) according to gauss distribution. So with this distribution it is most probable to hit in the middle of the radius - and what is there? You have there border of inner circle.

@UnstableVoltage explained it somewhere on this forum… or maybe on some introduction to aiming on PP youtube channel.

That’s correct. It’s based on a bell curves that’s intended to decrease the chances of a highly accurate or inaccurate shot. In other words, the projectiles are more likely to land closer to the inner ring and less likely to hit the bullseye or the outer ring.

Do I understand correctly that the red ring(50%) in the picture is the line with the highest degree of hit?
Or a ring with a high degree of hit - transparent and not shown to us?

red ring has the highest chance for a hit. But where on that ring will bullet go is quite random.

300 is center of aiming reticle and value of 400 is border of outer circle.

then the graph has 2 humps 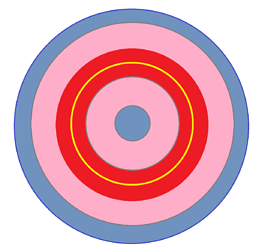 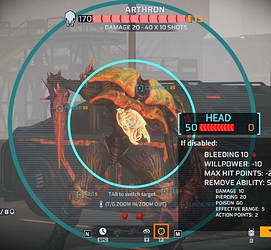 Thanks a lot to @VOLAND for writing such a great guide.

About the question of @MadSkunky. We do not want to pin it, because we want only the official announcements to be pinned. Which are currently patch notes and Canny.

But I have another suggestion. Currently, I am working on the official Phoenix Point Wikipedia. We want to include player guides written by players in this Wiki. So if Voland agrees I will put this guide there as Voland’s guide or whatever will be the name.

Yes that is correct.

Just read your guide and I think you’ve done a great job and it’s packed full of good suggestions. The one thing I didn’t necessarily agree with was your stance on diplomacy where you say it’s a bad idea to raid the havens.
I personally feel that you don’t need the support of all 3 factions to win the game, you just need the support of 1 or 2 and you can make do without the other one.
By raiding one as part of diplomacy missions for another, you can rapidly progress to allied status with the faction you’re trying to win with - it’s a more proactive approach that allows you to reach allied status in less time. I haven’t gone to war with another faction but I don’t want to wait for relations to build up through haven defences etc.
I understand building aircraft is also a good idea as stealing aircraft are dangerous missions and if you’re playing it ironman then you’re taking a big risk - but if you’ve got a strong enough squad then it’s worth doing - I tend to build one aircraft and take any more that I need off other factions, the diplomacy penalty isn’t that severe, it’s just that you need a strong squad to pull it off.
I think it’s definitely worth getting technicians for the electric reinforcement ‘I WIN’ button, but you don’t even need to keep on side with NJ to do that, just find friendly NJ havens on the map that have technicians to sell, and recruit them - their most useful skill has no requirements for technician equipment, and you can reverse engineer for equipment anyway.

Besides the diplomacy thing, I think this guide is superb.

But I have another suggestion. Currently, I am working on the official Phoenix Point Wikipedia. We want to include player guides written by players in this Wiki. So if Voland agrees I will put this guide there as Voland’s guide or whatever will be the name.

Of course, no problem!

I have updated the text with all the comments and suggestions in this thread, thanks again @MadSkunky, @Yokes, @MichaelIgnotus, @conductiv, @noStas, @UnstableVoltage and @David123.

Hopefully I will have time to continue working on this and if anyone has any more comments, or even wants to cover some pending, or new topic, all will be very welcome and appreciated.

@noStas thanks for the tips on formatting, hopefully I will get to it at some point.

here is the code with the correct size for the pictures, and you can edit the text in your own way.

Sirens. You need to talk about Sirens. The most common points that come out of the forum are:

Not to mention the number of sirens encountered in lairs that hit and then hide.

That’s a marvelous idea & so far, a superbly composed “Guide” for every players, new & experienced.

As indirect references for future needs or simply for curiosity, you might want to examine this GFX work of mine that goes through the “Research cycle(s)” by offering complex FlowCharts and reveals other gameplay details in a tight comprehensive manner.

Check it all out on Nexus Mods – Here; XAJSI

I even can’t imagine how stupid targeting system is…

Finally had a chance to look at your flowcharts. They are very cool! It’s a bit of a hassle getting them from NexusMods though.

@Valygar Maybe they could be included in the official Phoenix Point Wikipedia?