Base personnel could be another resource which you need to take care of. Recruit it, feed, provide with space to live, and assign. Then also defend it during base attacks.

If above points seem not enough and don’t give good reason to implement base personnel then I don’t know. Maybe I’m just too much intrigued by the details of the strategic games.

Why split the research when if I don’t split it and do it in turns I get all the research done in the same total time and some of it relatively faster?

I agree with this, personally I do tend to have all of my scientists on the one project 90% of the time. Engineers, however, I do typically split up. At this point though I am literally just talking about UFO:EU lol and PP would have to be tweaked to accomodate it (in UFO I like to have teams working on stuff for me and teams working on stuff to sell - and obviously there’s no sell mechanic in PP). So I’m with you and the devs insofar as not just implementing it for the sake of it, but with meaning.

Oh maybe I should also express my concern that most voters in the poll seem to like the idea to distinguish roles of each person from base staff and would like to train them and equip them. For me THAT would be too much micro-management, because it would directly impact my preparations for the battle and would increase management of my side during the battle (fight with staff - not just with soldiers). Also taking care of different roles/classes of base personnel could be somewhat overburdening. This is what I would like to omit.

But I definitely want to make bases more alive and more distinct. Idea that bases are there alone just with machines, when you take out all soldier to some external point on the map, is something which makes me irritated. THERE IS NO ONE LEFT in the base. But it is running fine and welcomes you each time whenever you go back. That is kind of alien to me.

Of course I would allow to build fully automated base, but later in the game with properly high resources cost. That would be unlocked after proper research reaching for the Phoenix Project fine years where AI was developed. Some Synedrion tech could also help with this setup. - that would also make history of Phoenix Project more deep.

All this sounds pretty nightmarish to me

I think that items should get damaged, they should save their state and transfer like that from battle to battle, then when highly damaged repaired in base

However, I agree that item and resource ethereal plane storage is kind of odd. Especially the fact that you can magically equip the same items to soldiers in different locations. But I would go for some abstraction there - like prevent the same item from being equipped on a soldier at a different location until 12 hours have elapsed from the mission it was last used in. (They could have some drones flying around, carrying stuff).

As to resource gathering and management, as I said earlier, I think it has to be integrated into a new diplomacy system. Storage location could be worked into that because nearby havens would be sending their resources to some PP base.

My preference wasn’t in the poll options, but I have suggested it on Canny.

Give base personnel perks to soldiers - https://phoenixpoint.canny.io/feedback/p/base-personnel-perks-for-soldiers

I’m with Spite on this. I’m pretty sure that somewhere in the intro they tell you that the base is run by AI, and that you’re the only humans in it.

I’m fine with that, but the idea that you could choose perks for your Squaddies that enables them to tweak the AI to better run Research or Build things more efficiently is a nice strategic choice that fits well with the game as it currently stands.

I’m pretty sure that somewhere in the intro they tell you that the base is run by AI, and that you’re the only humans in it.

Yes they tell that. But they say it because of design choice not because of lore that there is no more scientists or engineers and you can’t find anyone to hire.

My preference wasn’t in the poll options

Your preference is no dedicated personnel then. You want only some boosts to base coming from soldiers.

or, they could simply extrapolate them - every lab would have scientists in, every workshop, engineers… so if you are defending the base, there would be noncombatants present, and if any of them is killed, let say lab or workshop is “damaged”…
But this way, every building should require certain amount of food… so food would become a lot more important

If it’s just going to be about bringing back scientists and engineers for ol’ times sake, or to add a worker/tile placement mini game (as in FXcom), please leave the bases lifeless and shallow.

In fact game could be much better if more things,not only base staff, were brought back just for “ol’ times sake”. Just my thought.

I choose “some general base staff” because there’s no real need for more at this point.

Your preference is no dedicated personnel then. You want only some boosts to base coming from soldiers.

My preference was outside of the listed options.

I actually voted for separate scientists and engineers that could take part in base defense as I felt that that was closest to my own suggestion.

Imho all neutral havens should be controlled and manage by the players, not AI. For instance, player could build a mist repeller or satellite uplink or any building facilities inside those 6 slot *perhaps some upgrade building just to make them more interesting.
Some rough idea for upgrading building stuff before player could produce an elite soldier, player need to upgrade their food production quality, training, residence quality, research center and factory building which takes some time for it…let’s say all build it takes some time to be ready. 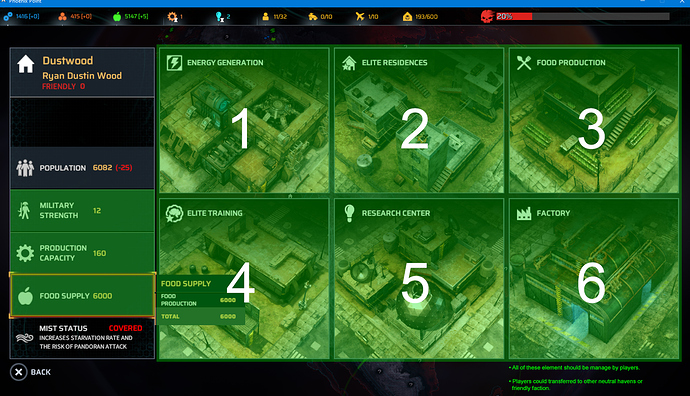 Basically it’s similar to base build and players could transfer their resources or soldiers (Military Strength) to all neutral and friendly havens. All neutral havens has their own combat screen theme with some group of AI soldier that represent of haven ‘Military Strength’ once they got attacked by the Pandoran.

I voted for the separate engineers/scientists/etc because it makes more sense to me, and would make base management more fun/interesting. “generic staff” would be alright too, but I think that bases should have some means of defense from their staff rather than relying on your constantly shuttling around your soldiers (whether the staff all have some kind of “basic” or randomized loadout based on your available tech, or are individually equippable before combat from your storage). So that tipped me towards option 3.

Personally I feel like whether (and how much) any base personnel have an impact on base defense is a separate question from base personnel serving functions in base buildings.

Voted for last option as it is close to the system I like. Not sure splitting the research will make any sense as research is meaningless right now, but for manufacturing it will definietely will.

BUT, I don’t like the idea of having civilians being part of active base defence. I don’t feel like we need a perk system and another metagame here. We need a security service, like armed guards that are AI controlled, and bulk upgraded by facility upgrade. One Guard post, spawns n-guards, standard starting equipment (non-retrivable).

Splitting research would be useless if there is no change in the formula of how it advances.
If it takes the same time to do 2 in parallel or sequentially, why would you do in parallel ?

So it would require a big rework of the current system and the player would then have an optimization problem on his hands. Closer to reality, but doesn’t add a lot to game-play and adds some micromanagement.
Of course, the same could go for factories.

Face it, reality is boring.

Simplifying those logistics problems enables the player to focus on more fun stuff. I can understand the choice made even-though I like optimization problems.

Yeah but base management is not fun in its current form. In fact there could be no phoenix bases after the initial one and it would make almost no difference to the gameplay, as things stand.

As is they’re the equivalent of rest stops on the interstate. Nice to have when you’re in the area but pointless the rest of the time.

I was thinking if all of these ‘different’ could be implemented correctly in the current base game, it could become a legend!

I guess there should be an option for complete control AI for micro management or fully control by the players.

I recall Civilization had this option.