Get rid of "dynamic difficulty"

At this point, I believe it is better just to get rid of “dynamic difficulty” altogether. Although it sounds great in theory, the way it actually works just seems to be “play more missions, enemies get more HP”.

This in turn is messing up the difficulty curve, which should be like the Xcom arms race: 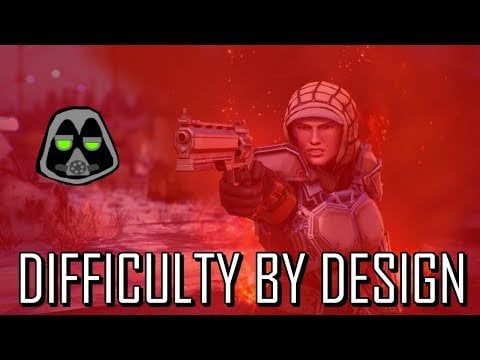 Now I would be all for the concept of “Pandorans adapting to player tactics”, as long as it doesn’t affect the overall difficulty curve. That is, the Pandorans change tactics but without arbitrary increases to HP or dmg. But it just doesn’t seem like this can be pulled off in the game. And if that is not possible, then better just to get rid of it altogether.

I don’t see the link with the video.

But yeah, the “Pandorans adapting to player tactics” seems have two main problems:

Let say “Pandorans adapting to player tactics” is borderline impossible, the idea of auto scaling isn’t bad, at worse it could be an option, or at least it needs more tuning and to be adapted to difficulty levels.

I actually havent seen a single “adaptation” beside a scaling in health/armor. In all games i played it started with arthon mg/shield and pincer/shield then switched to mg/shield and mg/grenadelauncher. After that they just added tritons, sirens and chirons.

No “adaptation” in any way.

As a minimum, they need to remove the link between HP/dmg scaling and the number of missions completed.

What would be better is that instead of enemy HP/dmg scaling (too much), you just had more, harder enemies in the late game (like XCOM).

I actually havent seen a single “adaptation” beside a scaling in health/armor. In all games i played it started with arthon mg/shield and pincer/shield then switched to mg/shield and mg/grenadelauncher. After that they just added tritons, sirens and chirons.

No “adaptation” in any way.

Lol, probably, but perhaps you just need use some new tactics, and you didn’t quoted it.

In my current play i don’t see such logical evolution, I came back to pincers no idea why. At some points shields came back, but yeah now it’s more AR/grenades/head poison. I intend do a significant change, disarm AR first to see if armors are going down lol.

I’m not sure if it was scaling difficulty or just poor pacing but I started getting the big aliens (the one where the abdomen can spawn stuff when it dies) just after I got the first jerico assault rifle (the non AP one).

Until then I didn’t really have any problems with combat.
If it hadn’t been such a small map (it started less than one move away from me), it may have been doable.

First time Scylla is hard to endure psychologically, they aren’t as much unmanageable than they seem. But with low level it’s too much damages to do, boredom.

For Scylla, their blaster canon does 80 damage with a burst of 10 and shred 30 (ouch).
But they have an effective range of 1. Which means that it is highly unpredictable to know where each blast is going.

Problematicallt, the entire design ethos of this game was to avoid the xcom style progression. That’s why there’s not much in the way of direct weapon or armor upgrades. Unfortunately, whether due to time, money, or difficulty, their “adaptation” system wound up being more armor, more hp, and bigger guns for enemies. The side grade weapon system WANTS to have enemies developing armor so you have to use acid or lasers or fire on them, then theoretically they’d lose some armor to build in resistances to fire, etc. The whole system as it is now just feels very half assed and abandoned.

No, one of the big weak point of (great but hate the gambling spirit) XCoM1&2 is choices, it’s mainly boredom obvious upgrades. PP favor choices.

the entire design ethos of this game was to avoid the xcom style progression.

Was that explicitly stated at any point? Just curious.

It seems to me they could have still followed the Xcom-style difficulty curve/arms race whilst still having scope for evolving tactics/mutations.

But I think they realised probably in September there was no way they could add everything they needed to the game so they had to polish what was left.

They did specifically state that, way back when.

I think evolved tactics was a too ambitious topic, auto scaling can become a good option or feature.

The big problem of XCOM race is the lack of choices in equipment. So you get all factions equipments and without to quote you can improve your teams or build all in instant? The difficulty can go wild but it’s a lot about auto scaling, before conclude this need be tuned.

I don’t think it is even close to “play more missions, enemies get more HP”

I’m a part time mediocre player - and I’ve noticed that every time I lose a trooper life gets a bit easier for a while - so those lvl 1 Anu guys are a sort of ablative shield for me!!

I like it - adds a very subtle dimension to game play.

I think that the dynamic difficulty stuff should only be in the higher difficulty modes.

The whole “pandorian adaptation” is straight up bullshit. The only thing that happens as stated in OP is that armor and hp keep scaling.

The pandorian configurations are random. All you need to do to prove this is reload the same mission 3-4 times and you will get crabs with different configurations in each. Which means they did not adapt shit, they just random rolled their gear.

This whole game is becoming more and more of a disappointment the more I dig deep into it.

Doesnt seem like adaption as much as linear progression on a set development track. Multiple fully armored bugs with shield, grenade launcher and as high HP as possible is objectively better then anything else

I like like the idea of having a non linear tech progression: the base faction techs at least are not better but have different advantages and disadvantages in some areas.

Beside Cannon and Grenade Launcher, plus a few special use of some PP amors, everything else is improved by faction. Moreover there’s a second wave of improvements with extensions and genetics clothes, and various special upgrades for each factions.

There are some progression, but a lot is about diversity of choices. I don’t remind any similar tactical games with so many possibilities with equipments and very far. For character building I don’t see any tactical shooter that compare for diversity and from far.

But for sure some tactical games as Final Fantasy Tactics are very far ahead for character building (but basic per comparison for equipments), but I’d quote more a recent game like Fell Seal Arbiter’s Mark because FFT design is protected heavily by grinding. Grinding is a sort of protection against OP holes, very best builds still require grinding or even require more grinding to be setup. Less OP builds will be setup faster but will require a lot more grinding to beat the game. FSAM gave up exploit such tools to avoid force players into large grinding, not as good than FFT in my opinion, but very good anyway and can be played without or without much grinding.

Was that explicitly stated at any point? Just curious.

Yes. Negative difficulty curve was something that was quoted as problem in Facebook Q&A (you can still find those among early updates - can’t be bothered to find exact quote. PP was to reverse it, making game harder as it progresses - so the player starts with advantage, and enemy adapts.
https://phoenixpoint.info/updates

FiraXCOMs progression system isn’t something I am a big fan of - it hides the shallow nature of the game, by faking player skill increase by stacking odds in favour of the player as the game goes on. Something I do like about XCOM2 progression, is how it utilizes early enemies in later stages of the game - sectoids and snakeman becoming effective support units after initially acting as the main threat. There is also the problem of the positive feedback loop - XCOMs tend to be either too easy or too hard - if you struggle you are less likely to do well in the follwing missions, and if you already do well, you will only get more powerful, making the game even easier. WotC somewhat addressed this issue with spikes in difficulty, though it is still far to easy to overpower Chosen IMO, and if they won’t hurt you they make you even stronger.

Enemies improving as the game goes on is something I can get behind - as players learn and explore mechanics game should increase the level of challenge: the issue seems to be that it doesn’t get any more interesting. It reminds me of an oldfashined way of doing difficulty - just buffing enemies with more health. That doesn’t shake up your tactics - it just limits what you can do, and makes you do the same thing more times in the row - not fun. Reminds me of playing Messiah of Might&Magic on hardest difficulty, where backstabbing was the only effective way of playing.

That is not great. Increased difficulty should encourage and test the mastery of the systems, and increase complexity of decision making; not make certain weapons and strategies unviable.

EDIT. Don’t read it as criticism of PP, as I didn’t get far enough to experience much of the enemy progression.

I like idea of how progression is done in Xenonauts. It’s driven by multiple factors:

What this means is that you can have a variety in which tech/units/ships will be “unlocked” by aliens and that variety depends on which UFOs you shoot down and which topics you research.
The downside of this approach is that you can get into a loosing spiral when you are not progressing fast enough, like not shooting down enough UFOs or not gaining new research topics. But this works fine as a general campaign progression and creates valid reasons to restart your campaign or replay it with different difficulty after gaining new insight.