What i would like to see in phionix point would be

to be able to have boss like units. no like we can spam them or anything like we can only deploy one or two on mission with 16 other units. but i think it would add alot of fun controlling a boss like unit. boss on boss battle, your unit list its weapons so you decide to use it as a battering ram stuff like that. it would aslo be cool if you could swap and change differnet weapons on it.
there is already art for a new Jericho one
(got the pic from recon raider who said it was on the discord channel) 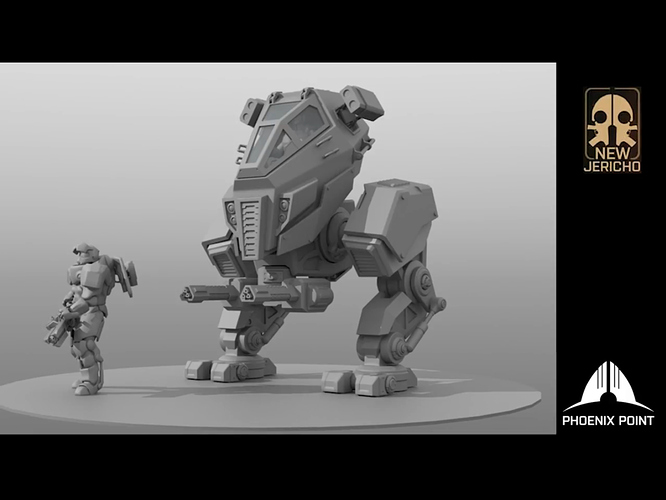 If I recall correctly the one on the pic it’s a mounted unit for NJ, if there is still in the game, they mentioned disciples of Anu had a mutated beast for mounted unit.

I think you can carry this units in a mission as long as your transport allows you to do it, for a 16 men transport maybe you can carry one of this and 10 men or something like that.

And talking about transports and mounted units, now I recall that in the piratez mod for OpenXcom your Hands had piloting skills and you can choose wich of them are your pilots to carry you to the mission or to try to take down an airship, I’m wondering if in PP this will be a thing, because you can recruit a guy that is not a very good soldier but he results to be a excellente pilot.

I’m not overly fond of having your ship pilots doubling up as soldiers. As long as an organization isn’t desperate for recruits, it makes sense not to put one who has a valuable skill (piloting) on the front line where he can get deathly deaded very fast.

Of course if said piloting skills also allows him to pilot combat vehicles/mounts on the tactical layer, then it’s an entirely different story.