I have an “unusable” gauss auto turret - compare the two screenshots.

I think it appeared after one of my turrets got destroyed. It is basically garbage - impossible to manufacture and unable to be moved to the “ready” inventory section.
What is the purpose of such an item? 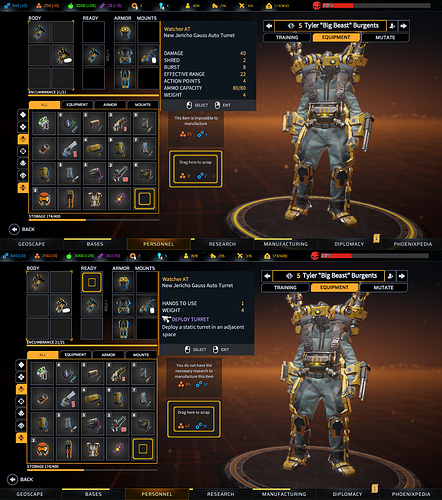 That happened to me, for the exact same reason. Got destroyed during a base defense. After that it would still appear in the equipment list, but not be usable.

Yup, it’s just a glitchy turret. Must be a left-over from an earlier turret design (where you had to load ammo into them, like a normal weapon) that they change in scope later on. I’d say that one is still referenced in some random code and comes up occasionally. (As already mentioned, it’s probably directly from the restock-from-destroyed during mission option. Just don’t select to auto-rebuild them)

Time to scrap that turret